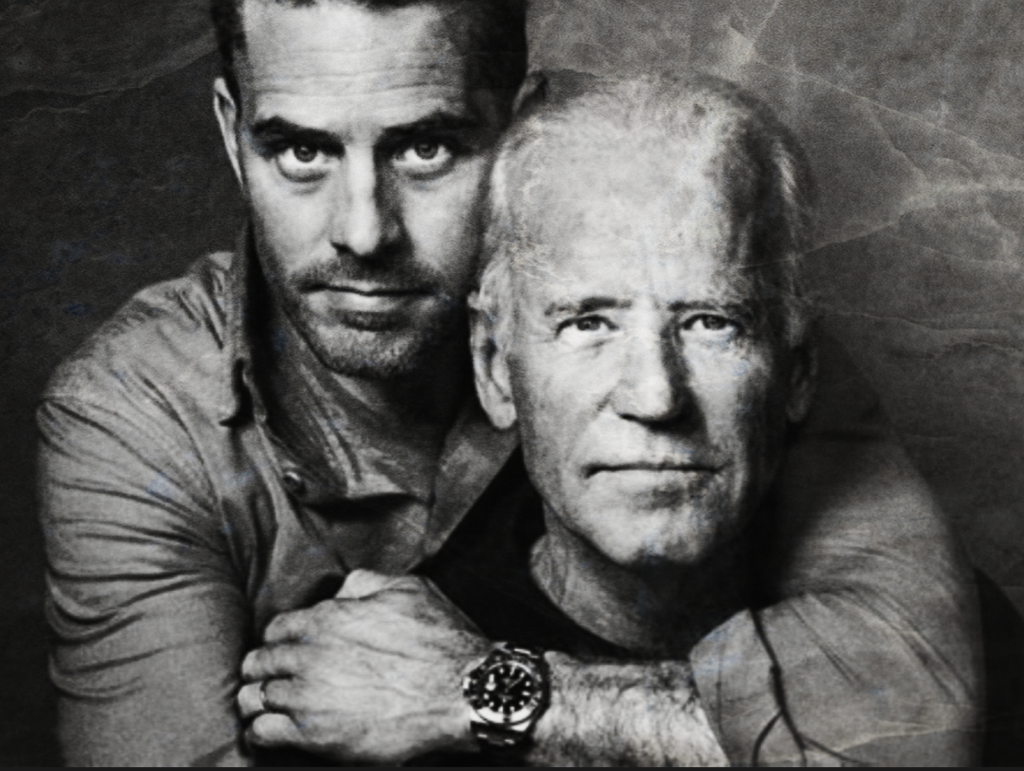 The Biden Administration has truly transformed into a criminal enterprise or, if you prefer, a crime family. I wrote about this previously in the September 14, 2021 Politichicks article, “The Definition of “Traitor.” In that piece I made a fairly accurate comparison of Joe Biden to Gambino crime family boss, Vincent “The Chin” Gigante.

You remember ‘The Chin’, don’t you? He was the boss of the Gambino crime family in New York from 1981 to 2005. For 30 years, Gigante walked the streets of New York in his bathrobe, mumbling gibberish to himself, yet he was sharp as a tack when he was with his associates. The Gambino’s were a profitable family, just like the Biden’s.

I am starting to think that Joe Biden is not afflicted by dementia. Behaviors are always revealing and based on his, Biden could very well be possessed by evil.

Now I know that there are those that embrace the school of thought that Joe is simply inept, like shaking hands with a ghost. But in consideration of Washington, my cynical side blooms like a full moon over the Potomac. And Washington resembles warring Mafia factions with every passing moment.

With the advent of new House Speaker Kevin McCarthy, some interesting rumbles are starting to happen in opposition to Joe’s agenda. As well they should. Departments like Justice and Treasury are out of control and were never meant to be used as weapons against the American people.

We also need to consider the 20 Congressional Republicans that held out against Kevin McCarthy’s confirmation as heroes to our Constitutional process. By negotiating with McCarthy, the 20 (as I like to call them) tightened the line. They have established a level of Speaker accountability that has not been seen since Newt Gingrich.

Now McCarthy is roaring out of the gate with bills to hopefully stop an insane agenda as conceived by a cabal–a cabal that directs a Gigante-like President.

With the discovery of mishandled classified files, we have yet another demonstration of the incompetence of the Biden Administration. But on more than one occasion crime families have fallen apart, haven’t they?

When facing exposure, even the Devil avoids protecting fools. I believe the powers behind the Democrat Party are looking to replace Biden. I do not think Biden will run in 2024. With his lack of a successful track record that would be infinitely foolish. When you consider Joe’s half century of mediocre public service, perhaps ‘infinitely foolish’ is an accurate description of his overall career. The irresponsibility and inappropriateness of Joe could provide fodder for a thousand bad dramas.

So let me get this straight, Joe. As Vice President, you check out various and numerous documents, some of them stamped ‘Top Secret’ and contain highly sensitive information that could compromise National Security. And then you neglect to maintain control over these classified documents and nothing is discovered until now–two years into your administration? Reportedly some of those file discoveries were stored next to your Corvette. Really, Joe? You had no authority as Vice President to declassify those files in the first place…

Hard to say if incompetence breeds evil or vice versa, but there has to be a stopping point. Maybe this is it.

The canyon-sized hypocrisy of setting forth a weaponized FBI upon President Trump astounds in light of these allegations. Unlike then Vice-President Biden, President Trump had every right to declassify the files found in the illegal and cowardly raid on his home…

By observation, and like too many politicians, Joe Biden seems to have gotten rich by way of politics. But some of that wealth is possibly due to criminal transactions with countries that may not have America’s best interests at heart. Joe’s tenure as a half-century pseudo public servant must end.

When will we embrace nobility again, America? After observing the face of evil of Washington for the past decade (in some ways directly), it becomes obvious that the enemy is not invading us. The enemy is here. The influx from the Southern border is merely a formidable backup to the rather insane current agenda.

Whether incompetent or criminal, Joe Biden should not continue as president. Perhaps the Ghost of  Vincent Gigante is haunting Joe’s remaining intellect, or maybe this is a clever ruse as inspired by a historical crime family. Stranger things have happened in the cabal of Washington.

As a devout Christian, I realize that God has truly got this. Evil will continue to rear its insanely ugly head within the annals of Washington for quite some time to come. The Armor of God is, ultimately, the best weapon against tyrants. And this criminal syndicate disguised as a government is no longer tolerable in a free America.