During the 2008 election, the Obama campaign dropped Robert Malley as an adviser over his work with Hamas on behalf of George Soros’ International Crisis Group. Once in office, Obama brought back his old buddy into the National Security Council.Malley (pictured above) then became the lead negotiator for the sellout deal to legitimize Iran’s nuclear program. 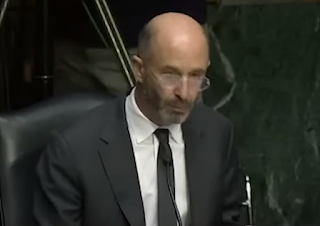 Despite vocal criticism from Iranian dissidents and the country’s freedom movement, Biden chose Malley as his special envoy to Iran. Even as Robert Malley continues conducting outreach to the Islamic terrorist state on behalf of the Biden administration, his son works at a pro-Iran organization tied to a key figure in the Iran Lobby.Robert was the son of Simon Malley, an adviser to PLO terrorist leader Yasser Arafat and the founder of a Communist party in Arafat’s native homeland of Egypt. Blaise Malley represents the third generation of the family’s leftist radicalism being used to prop up Islamist movements.The son of Biden’s envoy to Iran spends his time undermining American efforts against Iran.Blaise Malley is listed as a full-time reporter for the Quincy Institute run and funded by key figures in the pro-Iran movement. His most recently article agitates against further American involvement in the conflict against the Iranian-backed Houthi terrorists in Yemen whose motto is, “Death to America, Death to Israel, Curse to the Jews, Victory to Islam.”Iran spends an estimated $20 million a year backing the Houthis. Their ability to hold parts of Yemen is crucial to the terror regime’s ambitions for the region. America’s first strike against the Houthis was actually in response to their cruise missile attack on the USS Mason.The Quincy Institute for Responsible Statecraft was founded by George Soros and Charles Koch. Its donors include a roster of leftists and their foundations including the Ford Foundation, the Rockefeller Brothers Fund, Barbara Streisand, and Frank Giustra: the billionaire at the center of the Clinton Foundation scandal involving the sale of Uranium One to Russia.The executive VP of Quincy however is Trita Parsi: a dual Iranian-Swedish national who founded the National Iranian American Council. NIAC, described by critics as the ‘Iran Lobby’, has been accused of violating tax laws and the Foreign Agents Registration Act.Quincy’s board includes Francis Najafi. a wealthy Iranian real estate developer who is also a major funder of NIAC, and Amir Handjani, the exclusive broker for an American company doing business with Iran, and a Quincy Institute fellow, who also appears to be a donor.Masih Alinejad, the Iranian-American dissident journalist targeted for kidnapping by the regime, tweeted that, “NIAC and Quincy are the Russia Today of the Iranian Regime. They spend all of their time defaming critics of the Islamic Republic, myself included. When the regime attempts to kill us they’re either silent or mealy-mouthed.”As an envoy, Robert Malley is in theory supposed to represent American interests. At a minimum, close family members of Biden’s envoy to Iran should not be employed by an organization that has a vehement pro-Iran agenda and ties to pro-Iranian financial interests.But Blaise, who was nurtured by the same Islamist-internationalist network, who served as a managing editor at the Journal of Middle East Studies and wrote his thesis on “Is a Left/Right Coalition on Non-Interventionist Foreign Policy Feasible” is just the latest incarnation of the Malley family which seems to have been bred to undermine America and support its enemies. It’s only a matter of time until Blaise rises through the think tanks and then into the government.And Blaise is benefiting from some of the same connections that followed his father around.A recent letter in defense of Robert Malley fumed that, “those who accuse Malley of sympathy for the Islamic Republic have no grasp of – or no interest in – true diplomacy”. It was signed by, among others, Trita Parsi’s brother, a board member at NIAC, Amir Handjani, a board member and two fellows at Quincy. How better to dispute the accusation that Malley is on Iran’s side.The difference between father and son is that the elder Malley is embedded within the government and has to be a bit discreet, while the younger Malley is free to do his best Tokyo Rose impression in the virtual pages of any publication that will run his propaganda.In The American Prospect, a leftist publication, Blaise Malley warned that “Iran’s leadership may also have lost trust in an American government”, suggested that the Islamic terror state might be “keeping the door open to improving relations with the United States”, but cautioned that “it would be a mistake to assume that Iran doesn’t have a say in the deal’s future as well.”Iranian propaganda could hardly be any more clearly packaged.In The New Republic, Blaise Malley claimed that sanctions on Iran had killed 13,000 people despite the fact that food and medicine are not sanctioned. Malley quoted a Quincy official complaining that America had sanctioned Iran and “we won’t guarantee to lift the sanctions if they go back to doing what we wanted.”“No good has come of trying to isolate other authoritarian countries, such as Iran, North Korea, and others,” Blaise Malley whined at the Washington Examiner.Forget isolating them abroad, the question is how do we isolate them at home.Foreign agents for Iran, Qatar, the Muslim Brotherhood and the entire network around them have overrun D.C. and the media. And top government officials are complicit in the corruption.As Iranians protest for freedom in the streets, Robert Malley and the pro-Iran influence networks have been caught up in the backlash. Malley was forced to apologize for a tweet that he described as “poorly worded”. And NIAC, Quincy and their circle have tried to reject allegations that they are part of an ‘Iran Lobby’ by offering some concerned noises about the protests.The Malley family has come a long way since the French Interior Minister stated that Robert’s father and Blaise’s grandfather was issuing “genuine appeals to murder foreign chiefs of state”.But while the presentation may have changed, the underlying content remains the same.The Biden administration is maneuvering to appear to condemn the Islamist regime’s brutal crackdown on the protests while covertly supporting it. But it’s hard to maintain that illusion when the son of Biden’s envoy to Iran is pushing Iranian propaganda for the Iran Lobby.