In December, Biden told an entire story about awarding his own uncle a purple heart for fighting in the Battle of the Bulge.His uncle died ten years before Biden became vice president. 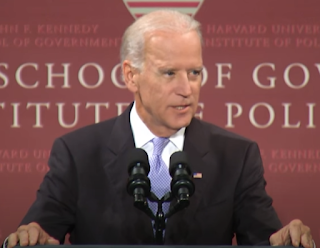 Biden began his story by saying, “My dad, when I got elected vice president.” His father died during Bush’s second year in office.The only possible explanation for this entire story is that Biden is crazy, senile or a liar so shameless that he makes Hillary Clinton look like the love child of Honest Abe and George Washington.And that was just another day of Biden telling crazy lies and the media letting him do it.Had Trump told a story about his dead father telling him to give a medal to his dead uncle, we would still be hearing about it, there would be memes, SNL skits, at least two books, one written by Michael Wolff, and probably a congressional investigation. But for Biden, it’s just Thursday.Biden claimed that his son, Beau Biden, “lost his life in Iraq” when he died of cancer in Maryland. Then he said it again, “I’m thinking about Iraq because that’s where my son died.”He claimed that, “I know, having had a house burn down with my wife in it — she got out safely” and “we didn’t lose our whole home, but lightning struck and we lost an awful lot of it.”There was actually a small kitchen fire that was quickly brought under control.The New York Times tried to spin this under the headline, “Biden, Storyteller in Chief, Spins Yarns That Often Unravel”. That’s the nicest way of saying “con artist’s pathological lies keep falling apart” ever.Biden has claimed that he “came out of the civil rights movement”, that he was arrested as a 14-year-old at a civil rights protest, and arrested trying to see Nelson Mandela. He claimed to have been desegregating restaurants and movie theaters.None of it, not a single word, was true.Biden lied, claiming that he came out of a black college. “I got started out of a HBCU, Delaware State.” The college confirmed he was never a student.When Biden isn’t black, he’s Puerto Rican.“I was sort of raised in the Puerto Rican community at home, politically,” he claimed. That sounds familiar, he also lied that, “I was raised in the black church, politically, not a joke,”When he wasn’t in the black church, he was Jewish.“I probably went to shul more than many of you did,” he lied to Jews in October, “I’m a practicing Catholic, but I’d go to services on Saturday and on Sunday.”You can blame some of this on his age, but the truth is that he’s always been a compulsive liar.In the eighties, Biden claimed to have graduated in the top of his class and that he went to school on an academic scholarship.None of that was true.Neither is his more recent claim that he was put forward to the Naval Academy. Or that his first job offer was from a lumber company that had never heard of him. Or that his ancestors “worked in the coal mines of Northeast Pennsylvania.”“I became a teacher. I became a professor,” Biden lied. “I used to drive an 18-wheeler, man,” he lied again. A White House spokesperson explained that he had once been inside one in 1973.There could and probably should be an entire book of Biden lies. But it would have to be digital so that it could be updated every hour on the hour.It would be nice to think that Biden is unique. He’s not. Democrats suddenly claim to care about truth. The truth is they’re all liars. Lying, like socialism, is a basic qualifier for the Democrat nomination.

Obama’s autobiography was admitted to be heavily fictionalized. Hillary claimed that she had tried to join the Marines and NASA. Senator Elizabeth Warren claimed to be Cherokee, Senator Richard Blumenthal claimed that he served in Vietnam, and Kamala Harris claimed that she grew up under racial segregation and listened to Tupac five years before he released an album.Democrats and the media are very interested in George Santos. They’re outraged that he lied about claiming to be Jewish. They’re much less interested in New York State Senator Julia Salazar who lied about being Jewish to justify her role in the antisemitic BDS movement.Senator Salazar also claimed that she was a poor Colombian immigrant when she was actually born in Florida and had a trust fund worth hundreds of thousands of dollars.Some of the same New York Democrat politicians fuming about Santos endorsed and campaigned with Salazar. The official Bernie Sanders site continues to promote the antisemitic con artist as evidence that his revolution of supporting extremists for higher office works.The truth about George Santos appears to be that he has the same shaky relationship with truth as the leadership of the Democratic Party. Just ask Joe Biden, if you can catch him in between desegregating movie theaters with the black and Puerto Rican communities, visiting synagogues, battling gang members, being forced down in Afghanistan, joining the Naval academy, getting a tryout for the NFL, graduating in the top half of his class, losing his first wife to a drunk driver, nearly losing his second wife to lightning, his son in Iraq and then awarding a medal to his dead uncle on the advice of his dead dad.It would be wonderful if all the lying stopped. It would be a good start if the party of liars stopped acting like they care about a fake biography when all of their biographies are fake.Why does Biden lie so much? The easy answer is because he gets away with it.Lying, like most political crimes, has become politically selective, allowing leftists to get away with anything while throwing the book at non-leftists. There was a time when Biden’s compulsive lies killed his presidential aspirations. In the Obama era, lying stopped mattering. And Biden has responded by Cloward-Pivening the very concept of truth into oblivion by deliberately telling crazy lies. Accusing Biden of lying has no sting because no one expects him to tell the truth.Democrats suddenly claim to care about fake biographies. They can start with the lies of the most powerful man in the land, rather than just another congressional freshman no one cared about before they decided to make him famous as the face of the Republican House.
Share
Facebook Twitter Pinterest Reddit Share via Email Print