The past few years Tucker Carlson on Fox News has from time to time dealt with a subject that we have not seen covered anywhere else in a long time: Flying saucers and/or UFOs. Back in the 1940’s there were numerous reports and they have continued since then. There is still supposedly an office in the Defense Department that takes reports of sightings. It reminds me of something written back in the early days of when sightings in the ’40s seemed frequent:

They float through the air with the greatest of ease,
But you’re not in the swim lest you’ve seen one of these.
Some say they’re Martians come from a far,
From Andromeda or another far off star.
To doubt them is dangerous of that I’ll agree,
Everyone sees them, so how come not me?

Of course, motion pictures in the fifties (as well as TV shows) did their part to cause an interest in the legend of Roswell, New Mexico, the supposed site of an alien crash landing. 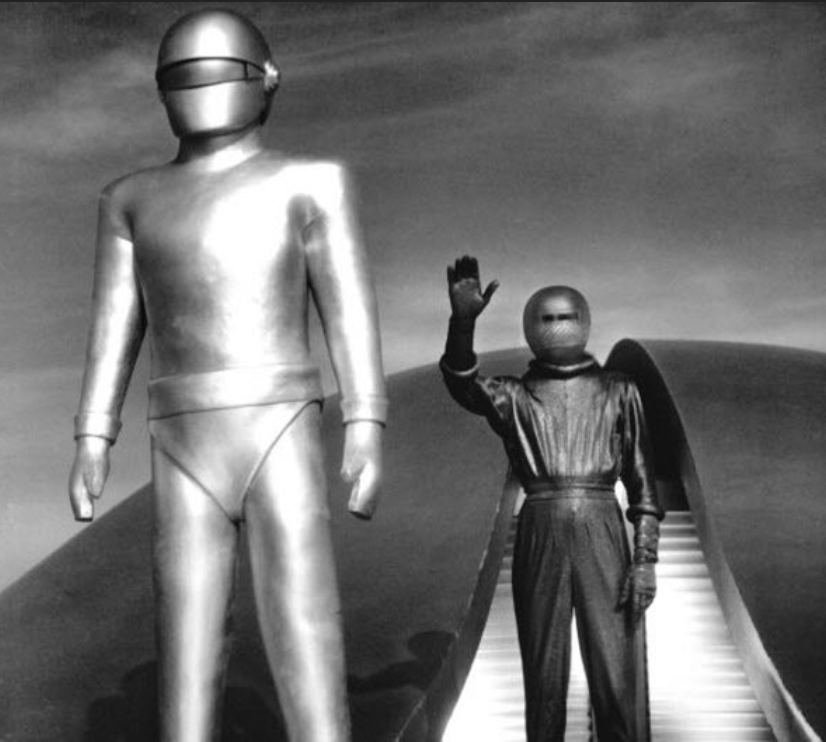 One of the first and most famous at the time was The Day They Earth Stood Still (1951) starring Michael Rennie and Patricia Neal. A flying saucer, as we called them, was pictured and “Rennie” was the alien who piloted it. The idea was a concern that other planetary civilizations had about our use of atomic power and rockets. Would our penchant for violence be a danger to the rest of the Galaxy? Patricia Neal co-starred, and my wife and I had an opportunity for a visit with her as Patricia had strong ties to Virginia. She had her training as an actress at the Barter Theater in Abingdon. Virginia. Patricia admitted that when she was in the film it was hard to keep a straight face as she thought the theme was silly. Now years later she became thankful she did the film which became a classic.

There was also a very scary film that reflected concerns we had at the time about Communism and Communists infiltrating our society: The Invasion of the Body Snatchers (1956) starring Kevin McCarthy and Dana Wynter. In this case there was an invasion in which “pods” were planted in a small town that would take over the bodies of the towns people. You would not know if your neighbors or family members had been taken over or not because like Communists, they were presumed to be everywhere. (Some might well wonder if “pods” really did exist, which might explain there being so many socialist Democrats…)

Now today there are a lot of theories about Unidentified Flying Objects. From a military standpoint they could be anything from a loose balloon or a sighting of a new military aircraft. On the other hand, are also witnesses, very well educated, that Tucker Carlson has interviewed who testify about very hard to disprove sightings. If the latter is true, then the question would be who or what are they and what do they want?

There are concerned Christians I have talked with who think they might be demons as we are getting set for the last days, the final battle in which Jesus Christ will be victorious. This writer is not sure C. S, Lewis would agree as he used science fiction (Out of the Silent Planet, Perelandra, That Hideous Strength) to suggest we might be the only fallen planet. He and other writers about Heaven, like Randy Alcorn, believe once in Heaven we will be given the opportunity to visit many different worlds and peoples.

We may not have the answers yet–but someday we will. The truth is out there, and that truth is with God.