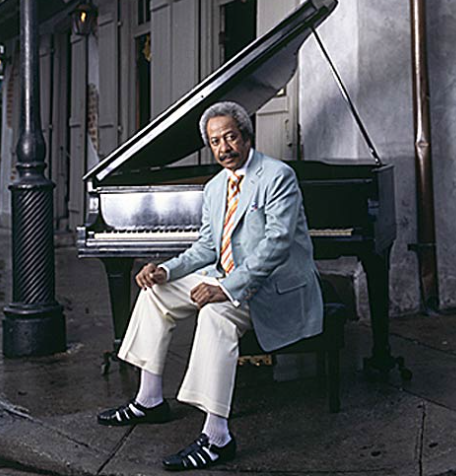 New Orleans, the city that care forgot. In my 48 plus years as a singer, guitarist, and songwriter, New Orleans continues to inform my rhythmic soul. For that matter, the music and the mysteries of the crescent city continue to inspire many musicians throughout the world. I have had countless adventures there. From sharing drinks with Keith Richards at a Jimmie Vaughan concert to having a lengthy conversation with Carlos Santana to recording there with Reverend Goat Carson to seeing many awe inspiring shows and experiencing those supreme midnight moments that only New Orleans seems to offer to me.

But my favorite moments in that city have been the many conversations that I was lucky enough to have with famed New Orleans pianist, songwriter, producer, arranger, and legend, Allen Toussaint. From having a two plus hour conversation about songwriting while shopping at the French market or discussing how visual art can influence audio art at a party at an art gallery, Allen Toussaint’s conversations with me were like the man himself, playful, full of memorable phrases, and ultimately, elegant.

That is why I am truly heartbroken as I write this article as Allen Toussaint has died, while on tour in Spain, in the early morning hours of November 10th. Thru the tears and the memories, I need to explain why Allen Toussaint was so important, not only to me, but to the music world at large.

Born in New Orleans in 1938. Allen Toussaint started playing piano by the age of 7 and was deeply influenced by local legends Huey “Piano” Smith and Professor Longhair and by national artists like Ray Charles. His first break came when he was 17 years old when he was asked to fill in on piano for Huey Smith at a gig with Earl King. By 1960, was serving as the chief songwriter at Minit records.

Allen Toussaint’s greatest legacy will be as a songwriter. Here is a partial catalog of some of his song titles, “Mother in-Law, Working in a Coal Mine, Yes We Can Can, Southern Nights, On Your Way Down, A Certain Girl, Fortune Teller, With You in Mind, Happiness, Play Something Sweet, Everything I Do Going to Funky, Get Out of My Life Woman, Lipstick Traces,” among many great songs.

Consider some of the artists that have covered particular Toussaint compositions. Here is a partial list: The Rolling Stones (Fortune Teller), Irma Thomas (It’s Raining), Bonnie Raitt (What Do Your Want the Boy to Do?), Little Feat (On Your Way Down), Glen Campbell (Southern Nights), The Yardbirds (A Certain Girl), Robert Palmer (Sneaking Sally Thru the Alley), B.J. Thomas/Three Dog Night (Play Something Sweet) Ernie K-Doe (Mother-In-Law), Al Hirt (Java), Benny Spellman (Lipstick Traces), The Band (Holy Cow), Esther Phillips (From a Whisper to a Scream).

Allen Toussaint’s comfort zone was as a songwriter and as a producer and he avoided performing. This was due to an innate shyness. At Minit records he played piano, wrote, arranged and produced such New Orleans R&B artists as Ernie K-Doe, Chris Kenner, Lee Dorsey, Irma thomas, Art and Aaron Neville. Some of the greatest work was Jessie Hill’s “Ooh Poo Pah Doo,” Ernie K-Doe’s Mother-in-Law, which he also wrote, Chris Kenner’s “I Like it Like That and Land of Thousand Dances,” among others

Toussaint was at Minit records for a minute when he was drafted into the Army in 1963. He continued to record while on leave. There are stories that Toussaint was performing tasks in the army, such as KP, while trumpet player Al Hirt was having a hit with a Toussaint composition called “Java.” Toussaint stated to his fellow soldiers that they were hearing some of his music on the radio. He was not believed.

After his discharge he joined forces with Marshall Sehorn. That partnership lead to the formation of Sea-Saint studios in the Gentilly section of New Orleans in 1972.

As a producer Allen Toussaint was an impeccable craftsman at various New Orleans studios and eventually his own Sea-Saint. Some of the artists that he produced were Lee Dorsey, who had some of his biggest hits with Toussaint produced and written tunes like “Working in a Coal Mine, Ride Your Pony,” Dr. John (Right Place, Wrong Time). Labelle had the biggest hit for the Sea-Saint studio’s production team with their “Lady Marmalade.” Paul McCartney also had the majority of his album, “Venus and Mars,” recorded there with Toussaint on piano in 1975.

In 1980 Toussaint was filmed preparing for a three piano concert with fellow pianists “Tuts” Washington and Professor Longhair, who died during the filming, that was eventually released as the film “Piano Players Rarely Ever Play Together” in 1982.

With inductions into the Rock and Roll Hall of Fame and the Blues Hall of Fame, among many other honors, Toussaint became the elder statesman of New Orleans music and was a well traveled performer. His death was unexpected and leaves a hole in the heart of musicians and fans everywhere. At the time of his death, Allen Toussaint was scheduled to perform with Paul Simon on December 8th for the New Orleans Artists Against Hunger and Homelessness organization. One of many instances of Toussaint donating his time, money, or attention to many worthy causes.

Allen Toussaint was always gracious, kind, and supportive to me as a songwriter. When I released a full length CD “Tension and Temptation,” in 2000, I sent him a copy. He sent me back a note of praise saying he wished he still produced, that he would have “liked to bring out some of my magic in the studio.” He always remembered the last conversation he had with you, even if years had passed. A truly elegant man who always had a kind word for anyone’s efforts. The heart of Allen Toussaint was always shyly and beautifully open. He was a true New Orleans Saint.

Here are my Five Favorite Toussaint Songs on YouTube.