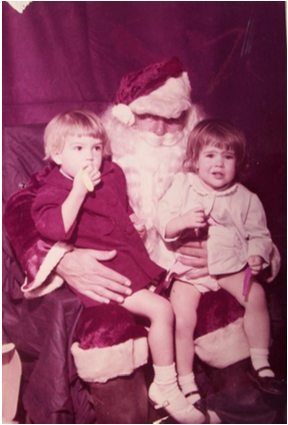 I was the proverbial reindeer in the headlights during my yearly trek to visit Santa at his time share inside the mall. I would cry like the world was coming to an end. I didn’t want to have any part of it. When my mother placed me on the lap of this rather large, white haired, STRANGER, it seemed to me that she had lost her mind. Three hundred and sixty four days of the year she was a protective force, surrounding me with love and understanding, and then one day she’s suddenly handing me over to a man she calls “Mr. Claus” (which I heard as “Mr. Claws”) and abandoning me as I burst into the most heartfelt tears that a 2-year old has ever cried.Of course on the other side of his lap is my sister, happy as a clam, looking like she’s lounging on a beach in Cancun. 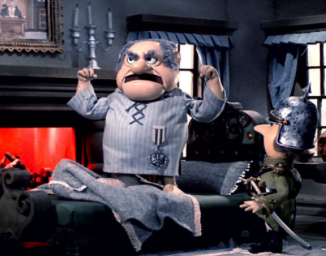 And it wasn’t just Santa Claus that scared me–it was the Burgermeister Meisterburger. The Roast Beast. Jimmy Stewart screaming at Donna Reed in It’s a Wonderful Life. Reindeer bullies. Snowmen coming back to life, and the list goes on and on. It’s my fervent belief that if you’re age 45 and up you were part of a generation that was bombarded with some of the most bizarre television images the Free World has ever known. And it wasn’t just the holiday shows–we also grew up with H.R. Puffinstuff, Witchy Poo, The Banana Splits, television doctors with their ever present packs of cigarettes, flying nuns, and so on and so forth. I’m surprised I turned out as fractionally normal as I actually did. However, even they seemed to throw realism out the window during Christmastime.

In my day the holiday specials usually started with the first glimpse of Bing Crosby. There he was, smoking a pipe, wearing a Santa hat with his eerily young, braces-wearing children and his perfectly coifed wife, cheerfully singing holiday tunes on his annual Christmas special. I read somewhere that his children from his first marriage were running the cameras, seating people in the studio, and fetching martinis for guest stars like Sammy Davis Jr. and Nancy Sinatra. It was all very heartwarming. However, just like sitting on Santa’s lap, sometimes when you’re young (and not my sister) Christmas can be a tad bit terrifying. Nancy Sinatra wasn’t going to come and comfort you when you found yourself wide awake on Christmas Eve, panicked at the thought of Santa finding out you’re not asleep and passing your house up for a home full of good non-insomniac children. Sammy Davis Jr., couldn’t personally assure you that a letter you addressed to “Santa Claus, North Pole” seven months earlier would actually get there on time.

And what if I spelled something wrong in my letter and got something I didn’t want, like pink fuzzy “horseshoes”? What if I was misled by Ron-Co about the true usefulness of a Rock Tumbler? (And let me say this: A rock tumbler is just as loud as you might think it would be.) I didn’t know if I was the only one who thought these things or if all the kids that I saw during the days before Christmas were developing ulcers as well. We could have used Rolaids flavored candy canes back then, or perhaps someone should have invented Children’s Rummy Tum Tums. I mean seriously, eight reindeer on a rooftop? There must be some type of zoning issue about that, right?

I guess I had the hardest time with the kids Christmas specials. The Crosby shows and the Bob Hope extravaganzas were for the adults. And yes, they were definitely bizarre, but nothing like what they geared towards the kids. For instance…

An abandoned baby, left in the forest to be raised by a family with names like “Dingle” and “Wingle”. The Burgermeister Meisterburger and his order to stop making toys (was there really legislature on this somewhere??) Santa in a mug shot. A Winter Warlock who melts down into a tiny feeble, little old man. And to cap it all off, a wooded area where trees can grab you. (This had happened twice now, once in the Wizard of Oz, and now this, I was therefore convinced that tree-grabbing was a real possibility…)

Rudolph having mud slapped on his nose by an incredibly cranky father who should have been reported to child/reindeer protective services. Playground bullying. A confused elf named Herbie who longs to be a dentist (and experiences labor law issues that would make Norma Rae’s head explode). A massively cranky Santa Claus who seems to have some sort of eating disorder. A large snow monster with cavity issues. Union problems among the elves, and an island of misfit toys (run by a real-life LION???). Additionally on top of everything else, Herbie and Rudolf are informed they aren’t even welcome on an island specifically geared for misfits, a place that has already welcomed a train with square wheels and a spooky Jack in the Box that I’m sure I saw on the Twilight Zone once…

First off, I had to get over the fear that this might possibly happen. Could a green, stringy beast show up in our living room on Christmas Eve and steal everything we have, including our ice cubes? No, that wasn’t worrisome at all. I enjoyed those cute little Who’s down in Whoville (so, so adorable) but I also knew if one of them walked into my room and started singing I would probably not stop screaming for the rest of my life. I remember feeling so sorry for Max, the Grinch’s cute little doggy, having to wear heavy reindeer antlers and do all that heavy lifting. And by the way, what the heck did “Ta-who bor-ray”mean anyway? Subtitles, please.

Logically I knew that a dog couldn’t win a decorating contest, but I also now knew that he would be useful if anyone needed something lifted if they put reindeer antlers on him. And I knew that psychiatric counseling cost way more than a nickel (believe me, I know). Furthermore, and this one really makes me mad, apparently children didn’t, in actual fact, dance like any member of the Peanuts gang, which would have been useful to know BEFORE I went to my first dance in Jr. High, or throughout the first dance at my wedding…

So there you go, just a few of the reasons that I developed night sweats at the tender age of seven. I don’t know what ‘new and improved’ Christmas shows are offered to children these days. I imagine it’s something much scarier. Justin Beiber as Ebenezer Scrooge in “It’s A Christmas Carol, Yo”. Or maybe a holiday special called “Kardashian Through the Snow”. If so, I’ll take the Bergermiester and reincarnated snowmen any day, thank you very much.

Be that as it may, even now, when I hear the beginning of The Grinch, or see a stop-motion Fred Astair in a mailman uniform, I become a little bit happier, a bit more joyful. I’ll probably always stop and watch every one of these programs and smile, sing along, and blissfully embrace every goofy little aspect. Did they sometimes scare me? Yes. Was I the only one? I certainly hope not. And so it goes.

I would be remiss if I ended this article any other way than with the most relevant story of the season. Charles Schulz, being the genius that he was, introduced children everywhere to the true meaning of the holidays in the simplest way possible: Through the voice of a child, on a darkened stage. After being bombarded with talking elves and singing Snowmen, this little cartoon would always bring everything into perspective, and it will hopefully continue to do so for many years to come. So if I may, in the words of the eternally wise Linus Van Pelt, “Lights please…”