When Bruce Wasserstein, a billionaire backer of the Clintons, provided a $25 million donation to Harvard Law, future Supreme Court Justice Elena Kagan, then serving as dean, welcomed it. The gift built on the Wasserstein Fellows Program already established at Harvard Law which brought “outstanding public interest lawyers” to Harvard and provided them stipends of up to $24,000 to meet with and influence students toward social justice at the prestigious law school. 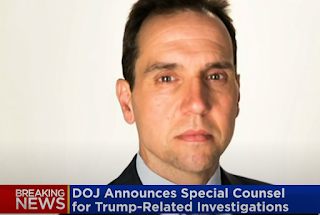 When Jack Smith became a Wasserstein Fellow, even while, unironically, serving as head of the Department of Justice’s Public Integrity Section, seemingly soliciting and accepting a grant funded by a leftist billionaire (but who watches the integrity of the head of the Public Integrity Section) he joined a list of leftist activist lawyers working for the ACLU, Earthjustice, the National Gay and Lesbian Task Force, Soros’ Open Society, Catholic Charities and the UN.

The mission of the Wasserstein Fellows was to gather “a diverse group of accomplished public interest lawyers who are enthusiastic about sharing their passions with law students on how to utilize their legal education to promote social justice.” Those passions included illegal migration, letting criminals get away with committing crimes and dismantling America.

How the DOJ’s Jack Smith would go about promoting social justice was a question that was answered twice. At least twice in public view where everyone could see and hear it.

The latest came when Attorney General Garland picked Smith as the Special Counsel to go after Trump. But before that anyone wondering what Jack Smith did to be chosen as a social justice lawyer would have had to be paying close attention to the IRS scandal that took place a year before he was made a Wasserstein Fellow.

Under Obama, the IRS and the DOJ had illegally targeted conservative nonprofits in order to silence political dissent. While Lois Lerner, sourly testifying before Congress, became the profoundly unsympathetic face of the IRS, the House Oversight and Government Reform Committee revealed who was playing a key role in criminalizing dissent.

“The Justice Department convened a meeting with former IRS official Lois Lerner in October 2010 to discuss how the IRS could assist in the criminal enforcement of campaign-finance laws against politically active nonprofits. This meeting was arranged at the direction of Public Integrity Section Chief Jack Smith,” the Committee stated.

Despite all this, Smith flew under the radar. While Lois Lerner was denounced, Smith remained virtually as anonymous as his name, including his actual name, John Smith, but Smith was just doing his job. Not on our behalf, but for those who had put him in his role.

Smith had been handpicked to run the DOJ’s public integrity section by Lanny Breuer.

Breuer, Bill Clinton’s Special Counsel who defended him during his impeachment hearings, and then Sandy Berger, after he stole classified documents from the National Archives to cover up Clinton’s actions, had been brought in by Obama to head up DOJ’s criminal division.

The Clinton consigliere, widely disliked, distrusted and hated even by fellow Democrats and lefties over his connections and client list, a man whom no one in D.C. believed had an ounce of integrity, then brought in Jack Smith to do some of his dirty work.

Would Lanny Breuer have picked anyone with integrity to head public integrity?

Public integrity under Obama meant targeting Republicans. It still does under Biden. Much as it did under the Clintons. Three corrupt administrations united by their abuses of the DOJ.

When a new day seemed to be dawning after Trump’s victory, Jack Smith made a timely exit from the government and became the head of litigation for the Hospital Corporation of America.

Marilyn Tavenner, almost as much of a staple of Obama scandals as Lois Lerner, who had headed the disastrous Obamacare rollout and tried to explain why the website wasn’t working, had come out of HCA. Nancy-Ann DeParle, the architect of Obamacare, became an HCA director.

Their real purpose of the HCA-Obamacare connection wasn’t to implement things on the consumer side, but to help broker a dirty deal that brought HCA on board with Obamacare. When King v. Burwell was poised to take on Obamacare, the HCA filed a brief on behalf of the illegal program to defend the exchanges as part of the dirty deal that it had made with the Obama administration.

Even as future Senator Rick Scott, the ousted former CEO of HCA, campaigned against Obamacare, warning, “If we have more government involvement we’re going to have dramatically worse health care”, Biden boasted of the HCA joining a deal to “cut costs” to make Obamacare work.

With that kind of history, Jack Smith going to work for HCA made a lot of sense.

To ordinary people, Smith’s career, the DOJ, war crimes prosecutor in Yugoslavia and the head of litigation for a hospital chain seem interestingly random. They do have one thing in common.

These were all priority projects of the Clintons.

Hillary Clinton had been obsessed with a government takeover of healthcare long before Obama. The disastrous intervention in Yugoslavia was a Clinton project. And the Clintons had been fixated on seizing control of the DOJ and punishing their political enemies.

That is what the DOJ began to do from Hillary’s abuse of FBI files to Russiagate.

Even Smith’s role as a Wasserstein Fellow has a familiar ring to it.

Bruce Wasserstein had a history with the Clintons. When Rahm Emanuel left the Clinton White House, he got a job running Wasserstein’s office in Chicago. And before long, the Clinton adviser and future Obama Chief of Staff and Mayor of Chicago had made $16 million.

Wasserstein did more than just host fundraising events for Bill Clinton, alongside Alec Baldwin, not to mention donating to Hillary Clinton, Gore, Schumer and so many other Democrats. (Although he was also briefly Mitch McConnell’s brother-in-law.) On his passing the corporate raider was praised for his “passion for social justice”. He never saw Hillary Clinton rise and fall.

It may be a coincidence, but Smith’s resume is what one might expect of a federal careerist with Clinton connections. Even his extended European vacation was the sort of thing that Clintonites used to build up their resumes. That resume became outdated in the Obama era, but Smith still seemed able to hit a lot of the right notes.

Smith was even named one of the “International Gender Champions” and claimed that he was “strongly committed to working with my Office to ensure that gender equality, as part of diversity and inclusion, is a key consideration to everything we do.”

There is one curious final note as to how Smith was picked as the Specialist Prosecutor for the Yugoslavia war crimes trials in the Hague. Smith was chosen in 2018 “after a selection process organised by the European Union” and was “appointed by the European Union Rule of Law Mission in Kosovo mission head, Alexandra Papadopoulou”. In 2020, Papadopoulou, a Fulbright Scholar, became Greece’s ambassador to the Biden administration.

Washington D.C. may appear small compared to some other major cities, but it’s a vast hive of careerists, contractors, consultants, lobbyists and activists all scurrying around the stone and glass buildings, the eateries and shops, whose relationships to each other are as entangled as they are hostile to us. As George Carlin once said, “it’s a big club and you ain’t in it.”

Jack Smith is a lifetime member of the club. And now he’s been given the biggest job of his career. It’s not one that is likely to reap much in the way of immediate rewards. Just ask Bob Swan Mueller III, but it’s an act of public service to the political network that runs D.C.

And parts beyond, into the European Union, which helped contribute to Russiagate.

Since Smith’s leg was broken after a bicycle accident (a hazard in the Biden administration), he’ll be running the investigation of Trump from Europe. And no one finds it odd that an investigation of a former president will operate from the capital of the European Union.

But it’s not like we run our own country anyway.

The upper echelons of the administrative state are a network of political alliances by ambitious men and women looking for the next rung to power. They don’t work for us. Instead they serve their sponsors and use political connections to navigate the public-private career ladder.

The media is already building up Smith’s mythos. “A Justice Department lawyer out of central casting,” the New York Times gushed, with a “grizzled mien”. And, “an idealist and a brilliant independent thinker and a gutsy lawyer”. Central casting always needs good actors to play the part and fool the people long enough for the next phase of the plan to kick into action.

And, at least unlike Bob Mueller and Joe Biden, Jack Smith probably knows where he is. And he knows who really runs things and whom he needs to serve to get that next big job.

Greenfield: How the Midterm Vote Got 'Rocked'