2018 was a rough year when mid-November my parents needed to move into Assisted Living on an emergency basis. My sister had pneumonia and there weren’t any moving companies available last-minute. So I ended up doing most of the move alone. To say it was brutal makes the word ‘understatement’ an understatement.

After my parents were safely in their new home I was finally able to rest. I guess I slipped into a strange type of depression because I began watching television nonstop.

My DVR was filled with a creepy combination of dark ID Channel crime shows, along with happy, sappy Hallmark Christmas movies.

After deleting all my pre-planned murder shows, I began watching the 1951 version of A Christmas Carol starring Alastair Sim as Ebenezer Scrooge.

I’ve seen and read the Charles Dickens classic dozens of times so normally when A Christmas Carol comes on television my mind starts wandering—what’s on my Christmas list, what’s for lunch tomorrow…

Case in point, before the movie got underway I thought of something that caused me to pause it  and look it up. All my life I thought of Ebenezer Scrooge as an ancient old man–how old do YOU think Scrooge was? According to Dickens’ book, Scrooge was born February 7, 1786. That Christmas Scrooge was age 57–EXACTLY MY AGE this year! I wonder now if other people approaching 60 go through something similar? Maybe Dickens, and folks like me, relate to Scrooge because we’re approaching old age, facing our own immortality? But I digress… 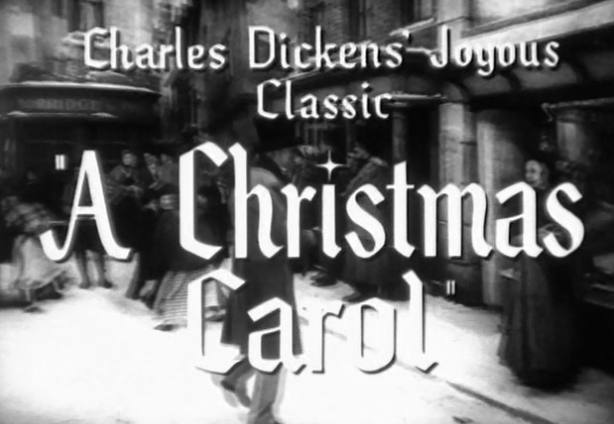 When I finally focused on the movie, something profound happened this time; something I can only describe as otherworldly. That night, A Christmas Carol helped change my life.

It started with the chains.

Jacob Marley’s ghost (or ‘spirit’) had appeared dozens of times on my television screen, from silent versions to the Muppets. I understood his chains were heavy and caused him to moan; otherwise I didn’t really think much about this part of the story as important.

But this time I got it, and it hit me hard.

It struck me to the core. How many people had I hurt in my life? How much making up did I need to do to eliminate some of my own heavy chains? And would I have enough time in my life to do so? The other spirits hadn’t even arrived yet and I was already crying, first time ever during this movie.

From that point on I really watched—and listened—to every word being said. It was as if I’d been transported into the same room as Ebenezer. I was there, right along with him, learning his Christmas Eve life lessons.

As each spirit came and went, I also realized for the first time the vast importance of the Spirit of Christmas Present. That particular spirit was always my favorite, mostly because he (or she, depending on the version) was usually Santa-like—joyful, happy, full of love and promise and hope.

The deeper meaning behind the Spirit of Christmas Present is that the other two spirits are just ‘air’. The past is over—made up of memories. The future is absolutely nothing—it’s not promised to us at all.

The Bible literally says we are to live for the days we’re given, not hope for the ones we may (or may not) ever have.

When Scrooge truly understands the real meaning of Christmas Present, that is when he is given his wonderful second chance. That is when his life changes and he begins his journey on his new path–working to prove he is a new and better man. And that journey began the moment he received the gift of opening his eyes on Christmas morning.

By the end of A Christmas Carol I was sobbing–happily, joyfully.

Then I thought about what life must have been like for Ebenezer the next few months after Christmas. It must have been very difficult having to continually prove to people he’d really changed. I imagine some folks were skeptical at first. Justifiably cynical.

With respect to Dickens, what follows is my added ending to ‘A Christmas Carol’. Or to quote Paul Harvey, “Here’s the rest of the story…”:

The following weeks and months after Christmas, Scrooge continued shining his light. Each day he worked diligently to prove his love and care for his family and community. After many years  living with joy and gratitude, and as a direct result of his Christmas Present, Ebenezer died a happy, peaceful man. He was surrounded by family and friends who genuinely loved and respected him.

2022 UPDATE: In 2018 I made a promise to myself and to God that I would live every remaining day of my life just like Ebenezer Scrooge on Christmas morning. I would proverbially throw back my shutters, look out at the morning and happily praise God, grateful for the gift of beginning another day.

Even on my worst days, whether now in deep mourning or on other days when MS causes immense pain, before I put one foot on the ground I smile and look up. I praise God for allowing me to be here another day. I ask Him to help me try a little harder, to maybe make a difference. Even if only in one small way. Every day.

Greenfield: A Monopoly on Speech