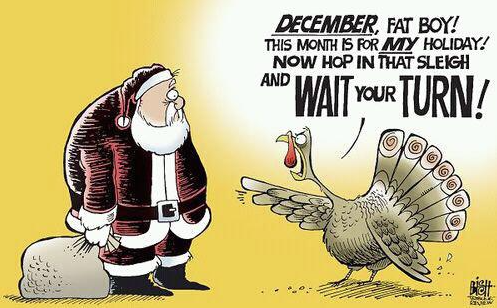 When I think back to my childhood and what I remember the most about Thanksgiving, I remember the early morning drive to Canton, Texas to spend the day with my Grandmother, Aunts, Uncles, and cousins. My mom, dad, sister, and I would travel to Mee-Maw’s house, usually arriving just in time to watch a gargantuan turkey being shoved into the oven, filled to the brim with stuffing and slathered inside and out with about two pounds of butter. The cousins played, the women cooked, the men watched football. That’s just the way it was back then, and I suspect in a lot of families it’s still the same way. As a child, one of my favorite things to do (you know, while waiting for the peasants to serve me my meal) was to scrupulously go through the special holiday edition JC Penny catalog and circle all the toys that I wanted for Christmas, and that was about as far as things got while we were still in the throes of November.

For years and years, Thanksgiving had been a holiday unto itself–a spectacular holiday centered around tremendous amounts of food (and more importantly) thanks. You ate, you felt grateful for your family, and appreciative that school was out for a few days. There were no Rankin/Bass Christmas cartoons being shown on Thanksgiving Day, and if you needed to go to the store and do some shopping you were out of luck:  no stores were open on Thanksgiving because everyone was home with their loved ones. That’s what Thanksgiving was back then, and it was wonderful.

By the time I became a wife and mother, things had changed significantly. Black Friday became this looming shadow that perched over all our holiday plans. The question now was, how to get everything ready for Thanksgiving, and still have the energy to wake up at 5 the next morning to save $4.00 on a vacuum cleaner for the in-laws, or be one of the first 200 people in the store so you could receive 10% off your first $200.00 purchase.

These days, by the time Halloween comes around the stores already have their Christmas trees displayed, usually right beside the pumpkins. Black Friday is now a phenomenon, something of a holiday unto itself, sort of like the Super Bowl of Shopping. And it’s just gotten more and more unbelievable. These days some stores never close at all, having their employees come in at noon, or four or six o’clock on Thanksgiving Day. Basically, Thanksgiving has become a shopping holiday and not a day of thanks.

Now I know that there are a lot of people out in the world that love the idea of a good deal, yours truly among them; but I refuse to give in to the commercialism of Christmas, especially on Thanksgiving Day. Instead, I’ll spend the day with my family, my mashed potatoes, and my gratitude for who and what I have in my life. Of course the next day on Friday afternoon I’ll probably be at Target buying a $3.00 toaster oven–and very thankful to do so!

Buy Lisa K. Brown’s book, If Cheese Made You Thin I’d Be Invisible By Now, HERE!