Election Day results, like clean streets and easily available products in supermarkets, have become artifacts of a recent glorious past. Don’t count on finding eggs and milk at the market or finding out who won the election on Election Day. The 2022 midterms, like the 2020 elections, are a work in progress that will, one day, when the right ballots are found, elect somebody. 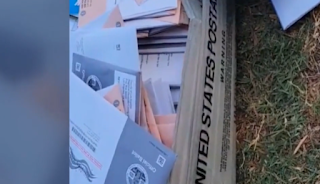 Acting Secretary of State Leigh Chapman, the leftist election rigging activist appointed by Gov. Tom Wolf, warned that it will take days to determine who won. At a “virtual press conference”, the virtual election boss, who hasn’t actually been confirmed by the legislature, warned that it would take “several days worth of work” to determine who won what. And who didn’t.Chapman, a veteran of The Advancement Project, funded by Soros and the Ford Foundation, which worked against voter ID rules to stop voter fraud, and Let America Vote, a leftist group to eliminate election security regulations, urged voters to “feel confident in our election system and in the final results.” Nothing creates confidence in an election system like a radical partisan activist being put in charge of it and then warning that the FBI will target any critics.If there’s still any doubt, Chapman assured that “this delay does not mean anything nefarious is happening.” Being told that “nothing nefarious is happening” is incredibly reassuring whether it’s hearing it from a strange guy in an alley, a corporate CEO or an election official. People who aren’t doing anything nefarious don’t usually feel the need to assure you of that.“The process is working as it’s designed to work in Pennsylvania,” Chapman promised.And I believe her. The question is who designed the process and what outcome do they have in mind?In October, the Supreme Court threw out a court’s illegal ruling that barring undated ballots violated the Civil Rights Act. A judge decided that when it says, “the elector shall then fill out, date and sign”, the date is actually optional because the word “shall” is not “mandatory”.Chapman insists that the Supreme Court ruling on undated ballots “provides no justification for counties to exclude ballots based on a minor omission, and we expect that counties will continue to comply with their obligation to count all legal votes.”So expect a lot of undated ballots to be found and a lot of days to be spent counting them.“Election workers must be given a reasonable amount of time to do their jobs thoroughly,” Chapman urged. We used to get election results immediately. Now counting votes has to be done “thoroughly” and requires a “reasonable amount of time” which is measured in “at least a few days”. Or however long it will take, a few weeks, a few months or a few years.And then she complained about “misinformation”.In Michigan, Secretary of State Jocelyn Benson warned that “unofficial results” might only be available “within 24 hours of the polls closing”.This should sound familiar. In 2020, Benson, a veteran of the Southern Poverty Law Center and assorted structural initiatives to benefit Democrat voter strategies nationwide, warned that, “We should be prepared for this to be closer to an election week as opposed to an Election Day.”Benson was able to preemptively send out absentee ballots to millions of people, rewriting election law, and getting away with it. Since then, she has kept on trying to unilaterally write election laws, but without the pandemic, she’s been losing some of those battles. Her attempt to control poll watchers was struck down as illegal because the activist didn’t bother actually going through the process. But the absentee ballots are going out and the results will be delayed.Like Chapman, Benson had complained that election results would be delayed because she couldn’t pre-process absentee ballots. Except that she now legally can.Last month, Gov. Whitmer and Republican legislators gave election officials two days to pre-process and prep absentee ballots. After demanding that authority, Benson and election officials claim that it’ll do no good. The majority won’t pre-process and Benson claims that there isn’t enough money to actually carry it out.With at least 1.8 million absentee ballots coming in, there’ll be plenty of excuses for delays.In Wayne County, home of Detroit, officials warned that they wouldn’t be able to get their results in because AT&T no longer provides 3G services. AT&T and other companies had spent years warning about a 3G transition. Even most ordinary AT&T and Verizon customers knew that 3G was being left behind. And yet the officials in charge of Ground Zero for ballot counting in Michigan were somehow unaware and had no plans for moving past an outdated technology.Next up, the dog ate all the ballots.But if you’re at all worried that anything funny might be going on, Benson’s Department of State has a video urging voters not to “believe the lie that dead people vote.” The video, ominously warns that there are people out there who “want you to think elections aren’t fair”. It assures skeptics that the only reason dead people appear to vote is because they “cast an absentee ballot” and coincidentally “then died right before Election Day”. Nothing nefarious is going on.Election officials, no matter how partisan or self-interested they may be, are to be innately trusted.Anything else is an “attack on democracy”.Then again, the Philly Inquirer just reported that “Philadelphia’s top elections official and her office knowingly misled voters multiple times this month” The Democrat paper warns that this “could further erode trust as growing elements of the Republican Party are seeking to undermine election results — especially by attacking Philadelphia.”Top election officials lie and Republicans pounce is the narrative.The midterm election rigging is underway. It’s not glamorous work. Mostly it involves bureaucratic rules, election battles and building an infrastructure in which election security is a joke and there are plenty of opportunities to poison the well.When the real election begins only after the polls close then democracy really does die in darkness.