With 77 people shot last week, it’s another pleasantly murderous autumn week in Chiraq.Mayor Lori Lightfoot got her $16 billion budget with its focus on ‘equity’ passed. By equity, Lightfoot meant giving herself a maximum 5% raise.Aldermen, or as the newly woke Windy City calls them, Alderpeople, got a 9% raise. 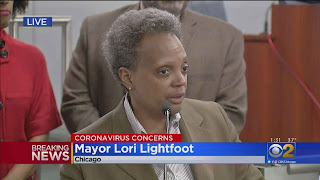 It is unlikely that Lori will ever see a dime of the pay hikes for her $216,210 salary because they’re due to kick in by 2024. No one thinks Lightfoot will be in office by then except the unions still funding her campaign which managed to burn through $607,449 in campaign funds without even running any ads. It’s another achievement in an administration filled with them.Where is the money going? Who knows. It’s Chicago. Everyone wants a nibble and a political operation has got a lot of mouths to feed. But everyone knows where her numbers are going.Last year, Chicago’s failed racist mayor had a 26% approval rating. Up from 16%. Only 5% strongly approved. 50% strongly disapproved. These days her approval rating hovers somewhere in the 25% range. Those are challenging numbers even for Chicago elections in which polls matter much less than poll workers and counting the votes is the real democracy.That didn’t stop Mayor Lightfoot from announcing that she was running again during the summer. Chicagoans greeted it with the same enthusiasm as a dead rat in the gutter.“I get angry. They say, sometimes, I take things personally. You know what I say? They’re absolutely right,” Lightfoot rambled in her reelection video.City residents have been taking her crime wave personally. And they’re angry too.In a true testament to Lightfoot’s talent for racial healing, even black voters are turning on her as Chicagoans of all races and creeds come together to say that they’d rather have Al Capone’s corpse as mayor..“Lori Lightfoot has a problem and it’s interesting for a black woman to have a black problem,” a local political analyst observed.That’s odd because according to Mayor Lightfoot, her only problem is that she’s a black woman in a racist and sexist city.Lightfoot claimed that “about 99%” of the attacks on her are because she’s a black woman.“Women and people of color are always held to a different standard,” she whined. And claimed that men “don’t like to see a woman assume power.”But, nobody, including black people and women, seem to want her to assume power again.With 5 black candidates running against her, Lightfoot doesn’t have a base anymore except the one in the mirror. But that hasn’t stopped her from blaming everything on racism and sexism.“I don’t look or sound like any other mayor we’ve ever had before, and I’ve had to fight to get a seat at the table,” Lightfoot complained in her reelection announcement, taking the familiar aggrandizing and self-pitying tone that grated on the city throughout her entire mayoral career.Absent from the Hillaryesque pitch is any reason why normal people should care.The implicit message is that anyone who votes against her is a sexist racist or a racist sexist. And with polls showing her doomed to defeat, Chicago must be the most sexist racist city ever.If only 25% approve of Lightfoot, 99% of the other 75% must be bigots according to her math.Or maybe it’s the 3,561 “shooting incidents” in Chicago last year which makes the Iraqis in Edgewater nostalgic for their homeland. There’s the 6-year-olds being shot and 5 people being robbed in one hour. And a general sense that the city is even more broken than usual.Beneath the bluster, Mayor Lightfoot is feeling desperate. Her $16 billion boondoggle budget refrained from the traditional property tax hike: passing the buck in the hopes of managing public anger. Like a whirligig, Lightfoot twirls through contradictory claims, from blaming State’s Attorney Kim Foxx for crime to embracing her, from attacking the police to promising to invest in more police helicopters, from claiming to fight corruption to giving herself a 5% pay hike.In a fundamentally divided city, Chicagoans are united in being sick and tired of Lightfoot.It wasn’t all that long ago that Mayor Lightfoot announced her racist policy of refusing to let white reporters interview her. These days fewer reporters of any color would even bother and even fewer readers and viewers would pay any attention to the latest excuses and lies.With Lori, everything is always someone else’s fault. After a weekend in which over 100 people were shot, she complained that “we are seeing historic levels of violence” and “yet we see people in Congress sitting on their hands and not doing anything.”After Officer Ella French was shot and killed, police officers at the hospital turned their backs to her. Her father yelled at the mayor who has tried to blame a Columbus statue for the murder of police officers.“Get that f—— statue back before noon tomorrow or I am going to have you fired,” Lightfoot allegedly yelled at a government lawyer who had tried to negotiate a deal with Italian-American groups to restore the statue..“You make some kind of secret agreement with Italians. … You are out there stroking your d—- over the Columbus statue, I am trying to keep Chicago police officers from being shot and you are trying to get them shot,” Lightfoot ranted. “My d— is bigger than yours and the Italians, I have the biggest d— in Chicago.”Lightfoot then convened a Chicago Monuments Project Advisory Committee which called for “artistic interventions” targeting statues of Lincoln, Franklin, Grant and Washington.But those statues are likely to outlive the city’s racist mayor.A whole lot more Chicagoans like Washington and Lincoln more than Lori Lightfoot. And the 2023 election is likely to do to her political career what her racist mobs did to the city’s statues.The statue of Columbus that stood proudly in Grant Park until it was assailed by Black Lives Matter racist mobs and removed by the racist mayor is still absent. But it would not be hard to imagine a Columbus comeback after she has been sent packing.As part of her $16 billion equity budget, Lightfoot wanted to build a whole lot of affordable ‘tiny homes’ of 500 square feet each.Next year, she can go live in one.

Lisa K. Brown: Should We Just Go Ahead and Call Thanksgiving "Pre Christmas"?