It’s a cool dark night in California and all the lights are out. Sloping rooftops dotted with solar panels gleam even more darkly than usual. The air is still and not a single breeze would stir even the lightest wind turbine. Somewhere out in the darkness Diablo Canyon, the aging nuclear plant, still running, is keeping what power there is on. The Northern Chumash or as the media insists on calling them, the Yak Titu Titu Yak Tiłhini, are demanding the territory which would make them California’s second only power.  They might prove to be better guardians of keeping the state’s power on than the Democrats. 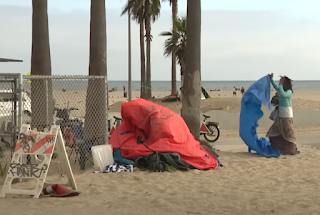 The great westward drive that began with Lewis and Clark has been steadily rolling backward. Southern California is filled with moving trucks headed to Arizona, Texas and Nevada. Those who can afford it, fly to Florida. The Russians were here once and then the Spanish. The American presence in California was more comprehensive and lasted longer, but may one day leave sagging Wells Fargo banks and decrepit mini malls filled with sushi places and nail salons the way the Spanish left their missions.

It’s a beautiful country, but so is Afghanistan and any number of otherwise unlivable places. Every other visit to a store seems to end with a shoplifter boldly walking out with a few items in hand. Sometimes a cashier, usually young and male, shouts futilely, “Hey, sir” into the wind. A few older women, cashiers and customers, mutter about how it’s hurting everyone. A manager says this is the new normal. No one connects it to the coming elections. The media tells them that the madness is a social phenomenon, a response to inequality, the pandemic, and climate change, and they never bother to argue.

We think of Third World countries as poor, but they’re not. Visit Karachi, Cairo and Jakarta, or even Baghdad, Gaza, or even Kabul, and you’ll see great riches and even greater poverty. The problem with income inequality isn’t that CEOs make two million times what their employees do, it’s that there’s nothing in the middle. The middle class makes a society, sane and livable. It gives people something to reach for rather than beating their wives or knifing their neighbors in the dark. The bourgeois is civilization. Without the middle class, there’s barbarism, a crude hierarchy and the rule of force.

California, always in the cultural vanguard, is losing its middle class faster than the rest of the country. The middle class made the state and its cities sprawl into vast stretches of spaghetti freeways, lots of surprisingly affordable houses whose garages spawned the technological revolution that changed the world, world class universities whose engineers went to work for the state’s defense industries,  and beyond them the orange groves and horse ranches, and the hills just made for hiking and riding.

Without the middle class, California is a vastly wealthy and endlessly poor third world state, blessed with vast landscapes and no one to fill them with except gang members, day laborers, welfare recipients and assorted immigrants who will move on just like the Americans have. Inflation and recession are only accelerating the inevitable migration. Third world migrants are coming northward and American migrants are going east. “Go west, young man,” Horace Greeley’s advice, no longer seems so sound anymore.

California was as far westward as most Americans seemed likely to go. Now Americans are moving eastward to a new manifest destiny. Not a destiny of expansion, but contraction. The migrations of the last century that reshaped the country are being reversed. People are leaving the cities. Black people are retracing their migration from the South to the Northeast. Americans are leaving California to immigrants from Asia and Latin America. It’s as if the nation’s history is coming unwound, running in reverse like an old film reel, which leaves us perilously close to replaying the Civil War.

There is something about the state that invites big musings and bigger dreams. But there’s little to dream about anymore. The defense industries are moribund, the orchards are starved of water, the entertainment industry is just another side venture of the tech industry, and the tech industry is beginning to flee the mess it helped create. And you can’t just run an entire state on being a place where rich people can enjoy seaside views if they can stomach the crime, the taxes, and the madness.

Southern Europe is already full of places like that. And Greece, Spain and Portugal don’t have a booming future. The trouble with California, like New York City, is its grandiosity. Building skyscrapers and rolling back the desert gave people the sense that anything was possible. But the horizontal and vertical towers of babel were only receptacles for civilization, not civilization itself. Men and women came to big cities and big lands to reinvent themselves and went mad instead.

“One sometimes gets the impression that the mere words ‘Socialism’ and ‘Communism’ draw towards them with magnetic force every fruit-juice drinker, nudist, sandal-wearer, sex-maniac, Quaker, ‘Nature Cure’ quack, pacifist, and feminist in England,” George Orwell complained in The Road to Wigan Pier.

California, like most major cities, is run by those people now. But it is in the tarnished state, that they let their wildest and maddest dreams roam. California, for Jerry Brown, would be a spaceship. It’s a spaceship now in a decaying orbit with a crew quarreling over how to distribute legal marijuana franchises to achieve equity between racial groups, union members, ex-cons, transgenders and the politically connected. Not that it matters because everyone is still buying the old-fashioned illegal pot.

Orwell could hardly have imagined this dystopia. It’s more Aldous Huxley, an Oxford graduate who died in Los Angeles County the day of JFK’s assassination. Huxley narrowly missed seeing the brave new world that was coming. The decadent intellectuals drugged out of their minds and the savages roaming beyond did not take long to show up in California. And the rest is history and current events.

“We will get out energy from the sun,” they declare. “Houses for the unhoused,” they clamor. “Money is just an idea,” they insist. “Crime is a social construct invented by white supremacy.” And so on.

What happens when people lose their sense of meaning and purpose? They sit on the beach, look out into the ocean, blind themselves with gorgeous sunsets and go out of their minds. Sanity is a function of responsibility. We are only sane as the tasks we set ourselves. Sanity means getting up in the morning and knowing what you have to do and why you have to do it. It’s also reality, maturity and adulthood.

If people in their thirties and forties today act like teenagers did a generation, it’s because they live like teenagers. And in tent cities strung along under overpasses, there are people in their fifties and sixties, strung out, staring madly, who never grew up. The smelly unshaven Peter Pans will never grow up. They will shoot up, get high, get stoned, get drunk, catch diseases, kill each other and die. And as a compassionate society, we will spend billions of dollars enabling them to destroy themselves.

Then we’ll get all our power from the sun. It’s the way things work in the magic kingdom.

There have always been two Californias. The state of working people, of farmers and builders, engineers and truck drivers and the other California.

“My own belief is that California has a unique place on the planet. It’s been a place of dreams. We can pursue a path of benign energy,” Governor Jerry Brown once said.

People aren’t meant to live in dreams. After a while they turn into nightmares.

In the darkness, an electric car emitting a spaceship sound whooshes past. Somewhere in the night a crazy laugh rings on and on. A billboard advertises app-based marijuana deliveries. A naked man is holding a giant pot leaf in front of his crotch. The crazy laughs breaks off into sobbing and cursing. A free magazine lying draped over a dying bird of paradise bush advertises a drag queen act.

We live in the land of dreams. Mad, idiotic dreams. And those dreams are killing us.

Delusions, like all viruses, kill the host. The Left and its culture wars are a grand delusion. Unlike class warfare, which for all its evil and folly was rooted in real issues and in human nature, the postmodern culture wars are the deconstructionist fantasies of perpetual revolutionaries who live in imaginary utopias. After repeatedly failing to realize a classless society, their new utopia will also get rid of gender, technology, the family and borders. That is not the work of people living in the real world.

But for now, the power is occasionally on, there’s sometimes food in the stores, and the system hasn’t collapsed, yet. Reality is harsh, but the 72 degree weather and mild breezes keep it at bay.

There’s still time for one more walk, one more breath and one more sunset. And tomorrow? Just follow the moving trucks and the great migration from the land of dreams back to the real world.

PTSD from WWII to Now: What's Being Done?