Timed to extract maximum donations from liberal Jews around the High Holy Days, PBS is airing “The U.S. and the Holocaust” not to set the record straight, but to cover it up yet again by whitewashing the FDR administration and exploiting the Holocaust to call for open borders. 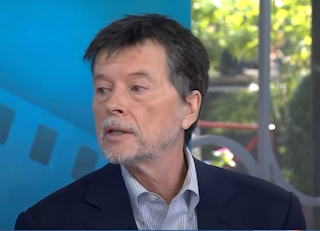 Jews and the Holocaust are nothing but useful talking points to Burns. His interest begins with the “slave trade” and concludes with the Capitol Riot. The message of the “The U.S. and the Holocaust” is that Republicans are the new Nazis, Burns is one of the heroes calling them out and Stephen Miller, Trump’s Jewish adviser, is the new  Breckinridge Long, a Democrat Nazi sympathizer who used his position as an FDR crony to keep Jews out of America.

Not that Burns is willing to indict FDR. Instead, he fashionably blames Long and other staffers who were just doing FDR’s dirty work for him: turning his series into more revisionism. But telling the truth about FDR would also destroy the false binary on antisemitism that is the only reason that Burns decided to tackle the Holocaust. That and the pledge drive donations for PBS.

The only story about the Holocaust that Burns would make, PBS would air and liberals would buy is one in which conservatives are villains and liberals, including FDR, are heroes. And the Jews, unless they have the right politics, are the villains, while the two million illegals crossing the border are the new Jews. Burns combines revisionism and supersessionism in one.

All while exploiting the Holocaust to solicit donations for the High Holy Days pledge drive because at $1.1 million a year, PBS CEO Paula A Kerger just doesn’t make enough money.

The reason for his popularity is that Burns excels at telling his older liberal audience exactly what they already know at great length, flattering their sensibilities by pre chewing pop history. “The U.S. and the Holocaust” reduces the mass murder of six million Jews to racism and immigration, digesting the extended horror into contemporary woke talking points.

Billed as a groundbreaking look at America and the Holocaust, Ken Burns offers nothing but the same liberal pieties that indict conservatives while avoiding a closer look at liberal complicity. The American role in the Holocaust undeniably begins and ends with FDR. And the worshipful blank check that liberals, especially liberal Jews, offered the mastermind of the New Deal.

There were things that they didn’t know back then that have since been revealed.

FDR’s reaction to the Holocaust was nakedly antisemitic. In 1938, he responded to the state of Polish Jews by blaming them for controlling the economy. In November 1942, with the official exposure of the Holocaust underway, he suggested quotas for Jews to ​“eliminate the specific and understand­able ­com­plaints which the Ger­mans bore towards the Jews in Ger­many, name­ly, that while they rep­re­sent­ed a small part of the pop­u­la­tion, over fifty per­cent of the lawyers, doc­tors, school teach­ers, col­lege pro­fes­sors, etc. in Ger­many were Jews.”

After the Holocaust, FDR met with Ibn Saud. The Saudi king was accompanied by his “slaves, taster, astrologer, & 8 live sheep.” FDR assured the famously antisemitic monarch that “he would do nothing to assist the Jews against the Arabs”. He later told Congress  “I learned more about the whole problem, the Muslim problem, the Jewish problem, by talking with Ibn Saud for five minutes than I could have learned in the exchange of two or three dozen letters.”

What were Saudi ruler’s views on the Jews?

Ibn Saud had called the Jews, “a race accursed by Allah according to his Koran, and destined to final destruction.”

“The word of Allah teaches us, and we implicitly believe this O Dickson, that for a Muslim to kill a Jew, or for him to be killed by a Jew ensures him an immediate entry into Paradise and into the august presence of Allah. What more then can a Muslim want in this hard world,” he vowed.

Before that, FDR had met with Stalin at Yalta. The two chummy socialists discussed what Roosevelt intended to offer Ibn Saud. “The President replied that there was only one concession he thought he might offer and that was to give him the six million Jews in the United States.”

Stalin had been following in Hitler’s footsteps by killing Jews. FDR was joking about the mass murder of America’s Jews with an antisemitic mass murderer. Or one hopes he was joking.

Why do FDR’s actions matter beyond the historical record? Generations later, liberal Jews continue to make excuses for more contemporary presidents like Obama and Biden when they sign off on Iran’s nuclear program and defend Islamic terrorists who murder Jews. When Jews are beaten in the streets of New York City or shot in Judea and Samaria, they look away.

Just like their grandparents who hung FDR’s picture on the wall and turned a deaf ear to the screams from the concentration camps did. That is why a historical reckoning is so vital.

In 1984, David S. Wyman, a non-Jewish history professor, wrote the explosive history, “The Abandonment of the Jews.” Rafael Medoff has carried on his work at the Wyman Institute with books like, “The Jews Should Keep Quiet“. Wyman demolished the familiar narrative that FDR had been a well-meaning leader who had his hands tied by Congress and by antisemitic staffers and was unable to let Jewish refugees in or bomb the rail lines leading to concentration camps.

Establishment historians responded to these revelations by doubling down on the “If Only Stalin Knew” version of history that exonerates FDR. Recent books like “FDR and the Jews” by Richard Breitman and Allan J. Lichtman try to contextualize FDR, depicting him as “compassionate but also pragmatic—struggling with opposing priorities under perilous conditions”. As Medoff demonstrates they do it by omitting FDR’s hatred of Jews.

There is a very good reason for doing that. FDR’s complicity in the Holocaust is also theirs.

The same liberal American Jews who rushed to give everything for the civil rights movement did next to nothing when six million Jews were murdered. And they went on worshiping FDR. They were willing to fight segregation and other progressive causes, but not the Holocaust, because they engage in such passionate activism to escape their Jewishness, not to articulate it.

“The U.S. and the Holocaust” quickly universalizes the Holocaust and replaces the Jews with illegal aliens. Ken Burns gives secular liberal Jews what they really want by remaking the Holocaust so that it’s no longer Jewish. Much as many Holocaust museums are already doing.

Burns offers the familiar version of the story in which everyone in the government except FDR was responsible for acts like sending the men, women and children on the St. Louis back to Europe to die. But the overall point of the three-part six-hour documentary series is that illegal aliens flooding across the border are the new Jews. And immigration policy is racist.

But it’s actually the leftists who are dismantling the entire asylum system that was built to make sure that refugees who face severe persecution and death are able to escape to America.

Open borders makes a mockery of refugee policies. And asylum has been turned into a sham in which migrants can claim to be “climate refugees” or flee high crime in their homelands, in which they can pass through a dozen countries before applying for asylum in the United States.

None of this looks anything like the Jews fleeing a world power’s plot to exterminate them.

It’s the Democrats who have once again dismantled the asylum system. And the backlash is likely to shut down all immigration regardless of whether the arrivals are persecuted or not.

That is the opposite of the lesson to be learned from Holocaust refugees.

The lesson of the Holocaust is not that countries shouldn’t have borders, it’s that stateless minorities, like the Jews, should have their own countries and borders. And it’s that there is a world of difference between economic migrants and refugees fleeing death.

The trouble with the remembrance of the Holocaust is not, as some say, that the world has learned nothing from it. No one should have expected otherwise. Ken Burns is the latest in a long line of ideologues appropriating the murder of six million Jews to push his pet agenda. The real tragedy is that American Jews, the people who have invested more energy than any other Jews in the world to memorialize the Holocaust, have learned nothing from it. And before the High Holy Days, they will watch PBS whitewash a liberal antisemite who thought the Jews deserved to die and then send in their donations so public television can demonize Israel.