“For we are not fighting against flesh-and-blood enemies, but against evil rulers and authorities of the unseen world, against mighty powers in this dark world, and against evil spirits in the heavenly places.” Ephesians 6:12 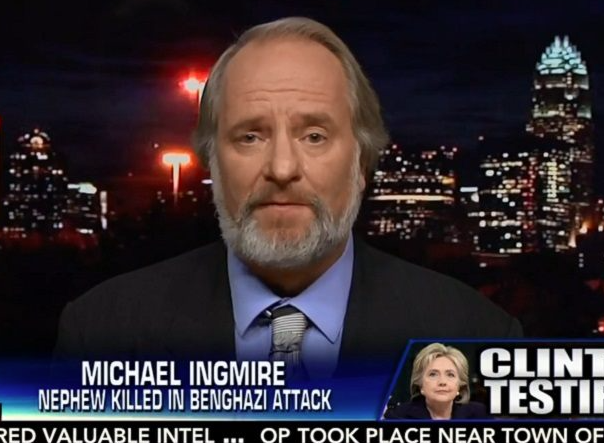 When the Benghazi attacks happened on September 11 and 12, 2012, I soon found myself astounded at the incompetence and criminality of the Obama Administration. Even more infuriating in the months (and now going on years) that followed, was the lack of any tangible response to the terrorists that killed my nephew Sean Smith, Ambassador Chris Stevens, Tyrone Woods and Glen Doherty.

To date, only two terrorists involved in the Benghazi attack have been formally tried. Both received flimsy sentences by an Obama-appointed judge. Others were droned or killed in some fashion or the other. Others were involved in the creation of ISIS, a horrific terrorist group that continues to plot murder and create mayhem today.

I realized, before the first anniversary of the attacks, that Barack Obama and Hillary Clinton were also terrorists within the larger context of Benghazi. They, and so many members of their administration, were directly involved in the establishment of the atmosphere that created Benghazi and the collapse of a stable North African region.

By both the Constitution and in God’s eyes, they are criminals. Incompetent, yet purposeful in their misguided form of corrupt jingoism. Criminals who still enjoy an active form of evil, seemingly facing no accountability.

Even before the attacks, I had sincere concerns about Barack Obama’s lack of moral courage and Hillary Clinton’s lack of expertise as a Statesman. Our fears were warranted when you consider the tragedies of Brian Terry’s death in the Fast & Furious gun running operation in 2010.  Our fears continued to be confirmed with the 33 deaths of some of our Navy Seals and Service Personnel in 2011 with the Extortion-17 mission. The blunders of the Obama administration straddle the fence between the criminal and the incompetent. It is difficult to discern how their utter incompetence cannot be anything but intentional evil acts to perpetuate terror and war crimes.

So how do I consider the lack of responsibility of the members of the Obama administration in regards to Benghazi, 10 years after the fact? By law, what Barack Obama perpetuated in Libya, Egypt, and Tunisia was unconstitutional and Benghazi, in of itself, was a Dereliction of Duty, a form of treason. Treason, like murder, has no statute of limitations.

Yet, I really don’t expect Justice in regards to the many crimes perpetrated by the Obama administration. These days Barack Obama, the Teleprompter Marxist Narcissist, is probably operating his third term behind the scenes in the Biden White House.

Many of the current poisonous and unconstitutional policies of Joe Biden have the distinct and rotten smell of Barack Obama’s hateful thinking within its origins. Of course, as Barack himself is a Soros puppet, he seemingly continues to gather wealth and a title change to that of Biden’s Puppeteer.

Hillary is still cackling away, irritating us all with hints of another Presidential run. She rightly knows that Kamala Harris is one of the few women more hated than her in Washington, so she remains delusional, yet hopeful for her chances of another Oval Office run. Despite the criminal activities of the Clinton Foundation and her other nefarious behaviors, I still expect no legal prosecution of Hillary Rodham Clinton in this life, deserved as it may be.

So again, you may ask how do I deal with the evil, avarice, greed, and dishonesty of these criminals in a government disguise? The devils that we know far too well, whose face remains flexible?

Well, to put a fine point on it, by Jesus Christ.

Before Benghazi, I prayed to our Creator without a true connection to His Son. I would pray only under great duress. Right around the time of my Mother’s death in 2018, I started to read the Bible again, consistently. Reading the Bible and playing the Blues helped me deal with the pain of my Mother’s loss. Grief has been a constant, unwelcome presence in my life. The best people in my life, the earthly angels of my existence, left far too soon.

In the past four years I have been working on a personal relationship with Jesus. I am still a work in progress. There are many things that I continue to and need to work on. As far as Jesus and His Father are concerned, I needed to passionately consider the following scripture:

So the scriptural conclusion I came up with was that I needed a personal relationship with Jesus in order to be remotely considered serious as a patron of constant prayer. A friend of mine astutely advised that prayer needed to be both specific to my needs as an individual and a conversational, everyday process. Now, I pray consistently everyday, sometimes all day long. Prayer and a closer relationship with Jesus has helped me to deal with arch criminals like Barack Obama and Hillary Clinton.

In the case of increased faith in the face of tragedy, Charles Woods, the father of Benghazi hero Tyrone Woods, is a touchstone of what I want to be as a Christian. Charles has forgiven Barack and Hillary for their Benghazi crimes. However, that does not mean he has forgotten what they have done. He still wants justice. Encouragingly, Charles is just not wrapped up in the fire pump of hate and anger. Like I said, a touchstone to consider. I am not there yet; I’m still working on the angry side of my personality.

In closing, in regards to the crime that was Benghazi, I will accept man’s justice towards the Obama Administration or God’s justice–whichever arrives first. The past 10 years have been instructional. I have met both the best and the worst that America has to offer. In the eyes of Christ and within His love, the experiences of the past 10 years have mostly been blessings, wisdom, and a time for deep reflection on what is really important in this life. I have discovered that my purpose on this earth is to be a voice for the truth and to help others.