New York, along with other states, is moving forward with massive wind turbine projects.

The push for “9,000 megawatts of offshore wind energy” comes at a high price, not only for families who are left dependent on expensive and unreliable energy, but for the planet. 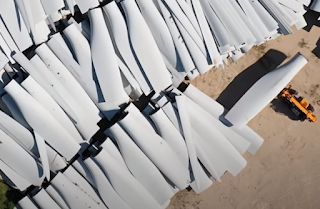 Wind turbines require massive amounts of rare earths for their generators and motors. A single wind turbine eats up tons of rare earth metals. Rare earth mining carried out in China is horrifyingly destructive to people and the environment. One story described radioactive lakes, high cancer rates and villagers whose “teeth began to fall out” and “hair turned white at unusually young ages”. “Children were born with soft bones and cancer rates rocketed.”

A recent Associated Press story about rare earth mining operations in Burma told of a world where “birds no longer sing, and the herbs no longer grow. The fish no longer swim in rivers that have turned a murky brown.”

Balsa wood is light, airy and popular for everything from model airplanes to planes. The obsession with green energy has created a massive demand for balsa wood to use in wind turbines. While a story from 2020 about how 14 million trees had been cut down in Scotland to make way for wind farms recently went viral, far more trees are cut down to make turbines.

One wind turbine blade can require as much as 5,300 cubic feet of balsa wood.

The price of balsa wood shot up, driven by demand from Communist China. While the Chinese have tried to grow their own balsa with limited success, they have turned to deforesting the Amazon. The Amazon, the world’s largest carbon sink, is being destroyed to reduce carbon.

Environmentalists are destroying the planet to save the planet.

Even while they were profiting from an artificial “green boom” fed by western green special interests, astroturf activists, fraudulent science, and pop culture crisis, Chinese companies were wiping out millions of trees in the name of saving the planet from a manufactured emergency.

Companies answering to Chinese interests found isolated tribes, traded them drugs and alcohol for slave labor, encouraged violence against those who would not comply, and the results were hailed by western environmentalists. The costs of China’s “wind power boom” were ignored.

China is working to build 18 megawatt wind turbines and dominate wind energy in Europe. The path of its poisonous silk road runs through the Amazon and to western environmentalists who believe that wind is clean and therefore wind turbines are a pure source of energy.

Balsa is an ideal forestry crop. It grows quickly and must be harvested before it ages too much. The rising price of balsa wood has also expanded growing operations, taking over farms and plantations leading to hunger and disease.

“These paradoxes of the so-called ‘green economy’ ruin the natural stability of the forests and the jungle,” a World Rainforest Movement report warned.

While wind turbines, when in operation, already kill as much as three-quarters of a million birds a year, turbine deforestation kills countless more birds by destroying their habitats.

Green eco-business and its allied leftist politicians remain obsessed with carbon, but the Amazon rainforests have been described as the “lungs” of the planet. And environmentalists themselves argue that the Amazon is a “carbon storage sink”. Destroying the Amazon to build wind turbines to reduce carbon would wreck the planetary ecosystem leading to the natural disasters that green energy proponents claim that they want to stop.

If astroturf environmental activists really wanted to save the planet, they would start chaining themselves to wind turbines, instead of vandalizing classical museum paintings.

The obsession with ‘carbon neutrality’ will only make matters worse. Eco-industries calculate the ‘carbon footprint’ of wind turbine emissions based mostly on their construction. Those emissions are assessed against the mining operations, concrete, rare earths and fiberglass, that go into making them. In order to lower their carbon metrics, eco-industries are now promoting wind turbines made out of wood which would lead to the destruction of more forests while increasing the price of housing even further to put it out of the reach of millions of people.

Saving the planet has now come to mean cutting down even more trees.

In Latin America, green energy has destroyed forests, spread drugs and also led to the kidnapping and sex trafficking of young girls. Logging mining camps, especially illegal ones, depend on a steady supply of male workers. The abduction and rape of underage girls has been traced back to the system feeding balsa wood to the wind turbines of China and Europe.

One reported noted that, “Young girls are encouraged by mothers and aunts to exchange sex for diesel so they can watch their favorite soap operas each night and escape the harshness of their lives for a few hours.”

So much for saving the planet.

The black market in balsa wood has attracted the attention of socialist narcoterrorists in South America and Islamic terrorists in Africa. Wind turbines are becoming another profit center for drug cartels and Jihadists, spreading ruin and destruction around the world.

Wind turbines were billed as saving the planet. They’re destroying it instead.

Glazov and Greenfield: Gorbachev and the Nuremberg-Style Trials That Weren’t

Mac Arnold: Bluesman with Nothing to Prove