Pass a Tesla on the street or pick up an Apple Magic Mouse and you encounter the sleek simplified aesthetics that underlie the mindset of the new technocracy. Apple used Picasso’s Bull, a set of drawings that reduce the animal to a stylized cubist abstraction, as the basis for its own minimalist aesthetic reductionism. It’s an aesthetic that meshes with Big Tech’s love of frictionless experiences that make complex processes appear deceptively simple. 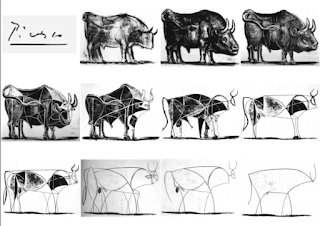 Eliminating the extrusions on a car or a computer peripheral doesn’t actually make them any simpler to construct or to operate. It’s a marketing strategy that also shapes how people think of technology. Early computer kits were messy assemblies of wire and circuit boards. The early internet was a sprawling assortment of unregulated content. That was around the time that science fiction author William Gibson, a foremost promoter of Cyberpunk, coined the term “cyberspace”. A generation later, Gibson even more radically envisioned the internet disappearing and being reduced to a few apps on the phone. And that is what happened.

A sizable percentage of the population now experiences the internet by flicking through platform apps like Facebook, Instagram, Reddit, Google, YouTube, TikTok, Twitter and Amazon. People flocked to frictionless experiences that simplified the internet from a bewildering jungle to a few apps whose algorithms offered customized push content to provide a distraction for a few minutes or hours. And those platforms ended up in charge of our society and our culture.

Free speech was the first casualty of the simplified internet. Most people give it away for convenience. And they never missed it until suddenly they realized that they wanted to say or hear things that the new platforms no longer allowed. Big Tech wanted people to keep on clicking, but not in a way that disrupted their business model, their politics or culture.

The problem wasn’t just censorship. The nature of how people experienced the internet had been fundamentally altered from open to closed, from pull to push and from independent distribution to a few centralized hubs. Senate hearings and threats of Section 230 intervention wouldn’t turn back the clock on not just how the internet was run, but how people used the internet.

And how people used the internet was also how speech, culture, and politics now worked.

The frictionless internet was both a model and a microcosm of a frictionless society, one in which the complex processes of the political system were ‘simplified’ and people did what they were told without realizing that is what they were doing. Cass Sunstein’s ‘Nudge’ suggested using sensible “choice architecture” to “nudge” people to make the right decisions. The book by the future and former Obama official came out a few years after Time Magazine declared “You”, as embodied by the social web, to be its “Person of the Year”

“You” turned out to be “Them”. Personalized recommendations were omnipresent nudges. Web 2.0 wasn’t empowering, it was profoundly disempowering. Moving from ‘pull’ to ‘push’ content turned netizens into passive feed consumers who were being distracted from their lack of agency with a bombardment of fake controversies and social media spawned nonsense. The two defining modes of Web 2.0, narcissism and trolling, were responses to the medium that also defined our society and our culture which is now one long battle between narcissists and trolls.

Early algorithms like Google’s PageRank that were bottom-up instead became top-down. The only true way to simplify everything was to rig it. And as the internet became everyday life, the difference between rigging the feed and rigging political systems became meaningless.

American elites envied the “frictionless democracies” of Europe where committees and stakeholders determined outcomes while allowing the public the illusion of participation. European elites appeared to synergistically merge media, political and corporate leadership into a smoothly running machine that amplified the right ideas and suppressed the wrong ones.

American politics was an old gas-guzzler with tail fins, fuzzy dice and smoke coming out of the hood while the elites wanted a sleek simplified electric car where all the dirty stuff happened out of sight and the public showed up on cue to vote the way that they were told.

Obama began the technocratic simplification of American politics. His brand was Picasso’s Bull applied to politics, a modernistic sketch, an abstraction, a set of delineations that simplified much, but offered nothing. Elites were impressed with how Obama simplified complicated issues with hollow aspirational platitudes. The more he spoke, the less he had to say, but the more moved the elites were by all the unspoken depths that they were sure lurked underneath.

“We are the ones we have been waiting for” was the embodiment of Web 2.0. Much like the “You” in YouTube, Obama and Big Tech were seizing power, not turning it over. The illusion of social participation was that power was being transferred to those who showed up instead of those running the system. And public frustration with the glass ceiling of the technocratic betrayal led to cultural backlashes on the internet and everything from Trump to Brexit.

Politics is meant to be ugly and messy by design. A too tidy politics has been rigged.

Frictionless politics eliminated debate and dissent. Or as Obama recently argued, “If we do not have the capacity to distinguish what’s true from what’s false, then by definition the marketplace of ideas doesn’t work. And by definition our democracy doesn’t work.”

Democracy is based on a behind the scenes consensus, as he put it, “what to do about climate change” that has no room for someone who says, “This is a hoax that the liberals have cooked up.” Political debate can’t extend to questioning premises, only pathways to outcomes. In a frictionless democracy, captive conservatives can offer “free market solutions” to global warming or racial inequality, but they can’t question whether these should be on the agenda.

The manufactured consensus in which people are allowed to differ on tactics not agenda items is the simplification of electoral politics that has taken hold in many first world countries. It is what leads people to think of different parties as flavors or variations on a theme. The illusion of choice fools many, but not all, especially as real problems take hold and cannot be addressed because they do not fall within the ideological premise of the artificial consensus.

Democracy that is all sleek lines, a mere hint of form, seeks to rid itself of the messy disagreements under the illusion that the elemental truth of a civilized society lies in eliminating the mess rather than embracing it. Europeans used to think this way, but Americans knew better. The Founding Fathers embraced the mess and made it the epicenter of our political experience. Radicals think that they are discrediting the Constitution when they delve into its messy history. To simplifiers who think like teenagers, the messy cannot be ideal and true.

Simplification suggests that life is simple. And that technology simplifies problems rather than complicates them. Thinking this way makes it all too easy to believe in preposterous abstractions like Modern Monetary Theory or Zero COVID. To simplify is to believe that following experts and relying on simple answers will create a natural unity like Obama’s right side of history. When political philosophies replaced religion, they outsourced Divinity to experts and to the invisible hands of whatever guiding force they believed governed all human affairs.

To deny it is political heresy or misinformation. The categorization of classes of speech as “misinformation” or “disinformation” merges politics and technocracy, reducing political dissent to a computer problem. Ideas become binary, either true or false, sorted based on expert opinion. Technology did not originate this familiar tyranny but its aesthetics make it seem logical and rational. Riefenstahl and Eisenstein made the Nazis and Communists seem heroic figures struggling for the soul of man. Technosimplification is even more pernicious in the way that it suggests that the problems have been solved and all it takes is clearing away the excess.

Simplicity can be more dangerous than totalitarian grandiosity because the cult lies within. Its invisibility makes it more seductive. Totalitarians wanted to overwhelm society while the simplifiers underwhelm it. Less is more, society could stand to lose pounds, conveniences, and complexities. Individualism isn’t a political crime, it’s an inconvenience. Morality is a trend and the conscience surrenders to the algorithm. You will own nothing and be happy.

The minimalism that makes anti-aspirationalism seem aspirational also made anti-capitalism into capitalism. It tapped into eastern philosophy to envision a seamless future that would replace the industrial revolution with a unity of art, technology and culture. That way of looking at the world remains central to key Big Tech giants like Apple, Netflix, and Facebook. Its hodgepodge of zen and business jargon is often mocked, but still defines the machine.

The internet, like the rest of our society, is at war between its messy truths of human nature and the technology underneath and the sleek simple aesthetics that make abstract socioeconomic theories seem realizable with a smooth technocracy and better AI. Progress comes from embracing the messiness of human nature and technology, repression comes from smoothing it away. That war between messy realities and smooth illusions may determine our future.