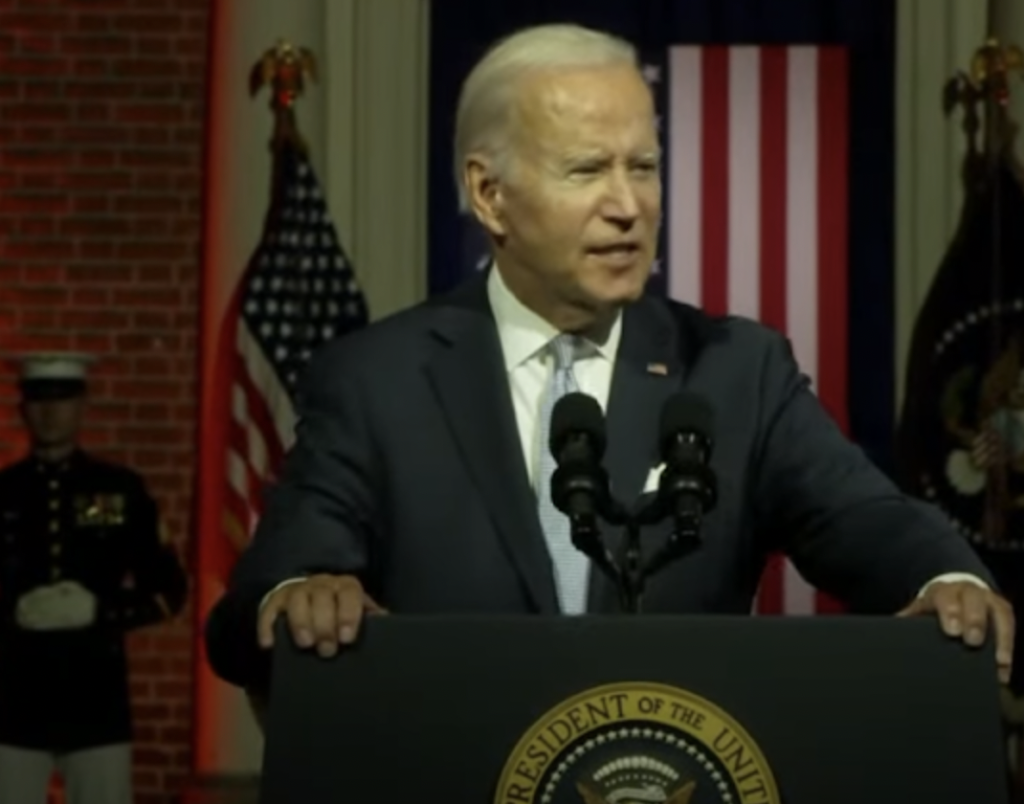 Republicans want to hold the majority and co-exist with Democrats, while Democrats, under the influence of the Left, want to eliminate Republicans.

This fundamental difference between the two sides was on display during Biden’s fascist rant in Philadelphia where he denounced half the country as a threat to democracy.

And it would be a mistake to imagine that all the talk of a “threat to democracy” is mere rhetoric.

Another basic difference between the two parties is that Republicans are politically unserious. Politicians, pundits and influencers spend so much time virtue signaling that they think words don’t matter. Democrats are quite serious. The Republican refusal to take them at their word, to believe that their histrionic rhetoric represents a serious policy agenda, is why things are so bad.

But what if they are?

Biden’s speech was the tip of a much more dangerous iceberg.

After Biden took over, Democrat activist groups began a push to disqualify Republicans who had participated in the Jan 6 protests from elected office based on the 14th Amendment. Adopted after the Civil War, it’s mostly notable for abolishing slavery. But Section 3 also banned anyone from holding elected office if they have “engaged in insurrection or rebellion” or “given aid or comfort to the enemies thereof.” Aimed at Confederates, most would have considered this a dead letter, but the Left excels at digging up obscure legal fossils and making use of them.

The insurrection lawsuits have targeted members of congress, Senator Ron Johnson and local officials. But by defining anyone who questioned the 2020 presidential election results as an “insurrectionist” or having provided “aid and comfort”, the scope could be vastly larger.

A New York Times article lists “147 Republicans who voted to overturn election results”. Lists like this are proliferating in time for the midterms and they are meant to be actionable.

The criminalization of the Republican Party achieved its first real win when a New Mexico judge removed Otero County Commissioner Couy Griffin from office over his role in the Capitol riot using Section 3. But there were more troubling developments earlier this year when the 4th Circuit ruled in a case involving the disqualification of Rep. Madison Cawthorn that the 1872 Amnesty Act did not nullify Section 3. A Georgia federal judge ruled similarly in a case involving an election challenge to another House member, though that case later collapsed.

The wording of the Amnesty Act is quite clear. It states that, “all political disabilities imposed by the third section of the fourteenth article of amendments of the Constitution of the United States are hereby removed from all persons whomsoever”. But an Obama judge argued that “pure common sense” showed that Section 3 still applies. Her ruling would have been dramatically different if conservatives were applying this to Kamala Harris who helped bail out BLM rioters.

But the law matters less than the agenda. Some of these efforts have run into legal roadblocks, but they have also seen some success in using Section 3 to establish a political test for office.

That political test is allegiance to Biden and the Democrat Party.

The legal counterarguments are obvious. The amnesties of 1872 and 1898 had been intended to nullify Section 3. But because the Constitution was never actually modified, that may not matter. Section 3 was arguably unconstitutional to begin with. But which Supreme Court justice will be ready to take a red pencil to a key civil rights amendment? There was no actual insurrection, and no insurrection prosecutions or declarations holding any legal status. But these are legal arguments that will have to be ruled on by judges. And they’re a poor guarantee of what is really at stake here which is the right of political opposition. Or the First Amendment.

A Congressional Research Service paper on disqualifying Republicans suggested that a presidential or congressional declaration would be enough. And that anyone who provided “words of encouragement, or the expression of an opinion” could have engaged in insurrection. Alternatively, “a simple majority” could be used to refuse to seat House or Senate members.

Last year, CREW, Common Cause, MoveOn, the Constitutional Accountability Center, and other leftist activist groups wrote an open letter to Senate Majority Leader Chuck Schumer urging the use of Section 3 to prevent Trump from holding office. But their scope is much wider than that.

Citizens for Responsibility and Ethics in Washington (CREW), which is a 501(c)(3) and is supposed to be non-partisan, was behind the successful New Mexico disqualification lawsuit

“Section 3 of the 14th Amendment can and should be used to bar anyone who engaged in the insurrection,” its leader argued.

How is “engaged” defined? In the case of Trump, there is the false insistence that he bears “responsibility” for violence during the Capitol riot even though he was opposed to it. The Constitutional Accountability Center quoted an opinion suggesting that anyone who engaged in any “overt act for the purpose of promoting the rebellion, may well be said . . . to have engaged in rebellion.” Both CAC and the CRS paper promotes the idea that the “expression of an opinion” is enough.

These are some of the reasons why future presidents and legislators hurriedly dismantled the emergency Civil War era measures that were grotesquely unconstitutional to such a degree that they would have outlawed the existence of any political dissent. But they did so in a clumsy and incomplete fashion and those measures, along with even more clumsily written Civil Rights era legislation pose an existential threat to civil rights and political freedom in this country.

And long after the end of the Civil War, Section 3 has been revived by the former Confederate party turned Communist that has the country’s most consistent track record of treason with the aim of overthrowing the Constitution.

Leftists didn’t oppose McCarthyism. They just wanted to be the ones dispensing it.

Beltway Republicans shrug at this sort of thing as posturing. They refuse to believe that this is a serious statement of intent. And even if it is, they privately argue, it won’t go past a few state officials, some fringe House members, or Trump at worst. They’re sleepwalking into disaster.

This particular bid to outlaw the Republican Party may go nowhere, but if so it won’t be because of Republican opposition. It will be because leftist groups decide to prioritize their resources on more immediate programs rather than launching a dramatic moonshot. But it remains part of the agenda. And Biden’s speech shows that the agenda is being entertained by the White House.

The midterm and the next presidential election are being defined not in terms of policies and issues, but as a response, in Biden’s words, to a “threat to this country” posed by a “Republican Party” that is “dominated” by “MAGA Republicans”. That’s rhetoric, but among Democrats, unlike Republicans, rhetoric is a political program, not just fundraising text messages.

Democrats and their allied non-profit groups have laid out a political program for reviving Section 3 to bar most Republicans from holding office. They have spent money on it, field tested it in courts, gotten Obama and Biden judges, along with prominent legal experts, to sign off on it, and only fools would assume that they don’t seriously mean it. Or that they just thought of it.

Republicans couldn’t bring themselves to bite the bullet during the Cold War or 9/11 and respond to a global conflict and abetted by the domestic Left by cleaning house. Conservatives missed the most important point about the Left’s hysteria over the fairly minor Cold War investigations of Communism or the Patriot Act’s light touch on Islamic terrorism.

How was it possible to seriously accuse mild-mannered men like Eisenhower or George W. Bush of being fascist dictators in complete contrast to their unambitious domestic programs?

The Left wasn’t making bad faith arguments. Talk to a leftist and you will see that leftists genuinely believed that Republicans were prepared to use national emergencies to wipe them out of existence. Why did they believe that? Because it’s what they would do in their place.

Glazov and Greenfield on Kamala Harris: "There's Never Been Anything There"

Dr. Fred Eichelman: I Was Once Accused of Buying Dirty Books...