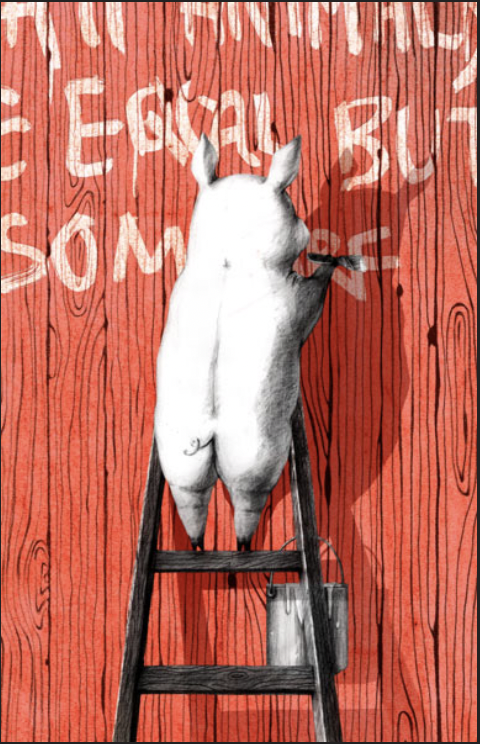 George Orwell’s classic book, Animal Farm, may have come out 77 years ago, but its relevance is unshaken even today. In a global world order that is murkier than ever and marked by constant trade wars, battles, and geographical claims of insane illegitimacy, the good-willed men and women in power turn out to be the wolves dressed as naive protectors of public interests. Or to put it in Orwellian terms, they are “more equal than others”, the pigs who rose to promise an egalitarian world but have now reduced their talk of equity to mere words and no more.

The animals of Manor Farm rise in revolution against the human owners, in a quest for a place where all animals can be equal. When some animals become more equal than others, the society they are trying to build falls apart.

Orwell remarked in his book, Why I Write, that Animal Farm was indeed the first in his attempts to create something political out of his art. Here, he was critiquing the dictatorship of Stalin, seeing the cult stature that the leader was reaching as a major issue that plagued the world back then. A personality cult is indeed a marker of authoritarian rule, be it dressing up as the uber-cool know-it-all of politics (think Barack Obama), or pretending to be the leftist face of “progress” in America. Thankfully there is a limit to which this cult can extend: when welfare dips and socio-economic conditions are crumbling under their feet, it is the presumptive shot heard around the world.

The World Economic Forum led the charge of the Biden regime’s talking points of electric vehicles, solar energy, global warming, and climate change. Where Orwell was seeking to awaken U.S. societies to the totalitarian dangers that threatened democracy, politicians today are engaging in doublespeak to manipulate and deceive citizens. Using government propaganda–aka their bought/paid-for media–the sky is always falling. And now, political despots insist that the climate crisis poses an urgent threat to the existence of all societies and ecosystems around the world. Except for the chosen ones–you know, the liberal elitists. Or as Orwell called them, the Napoleons.

Today, the Biden administration uses military force and his federal attack dogs to intimidate the other animals (the citizens), combining power with fear of retribution.

“Lies are Truth” and “War is Peace”

In this Orwellian world, the government even manufactures an imaginary war as propaganda to justify misery inflicted upon their citizens. Orwell’s parallels to modern global warming hysteria are self-evident. Marxist influences from arrogant world leaders, who boast about “climate science”, supplies their most powerful tool in their fight against free-market capitalism. These climateers shrilly respond that man-made global warming is serious and insisting there is a “scientific consensus.”

There is no consensus. There is no global warming. The only thing “true” is that there are political charlatans and swindlers scaring the populace with threats of famine and depopulation (“by more than half”).

So what’s the next narrative? The ruse of science on climate change led the way to a Green Energy platform. How did this happen?

Across the globe, there are frequent and destructive weather disasters that are overwhelming existing outdated infrastructures. Global authoritarian politicians have devised plans to rake in billions of taxpayer dollars on Green Energy schemes using the deception of the “world ending” due to global instability and weather phenomenon. As crops are forced to die as sweltering heat crisps the earth, farms across America in Democrat-run states are being forced to cull their herds and decimate their fields. This chokes off the food supply and reduces resources. Thus supplies lesson and demand increases, and only adds to the government’s new extended mandates with farmers.

The creepy cover of The Economist Magazine, a Rothschild-owned publication that caters to the elite globalists, pictures a field of wheat with the kernels of wheat represented as skulls. The title: “The Coming Food Catastrophe”.  The Rockefeller Foundation, another globalist club with ties to Bill Gates, Schwab, and the WEF, recently warned that a global food crisis of biblical proportions is scheduled to arrive at our doors within five to six months. Rockefeller Foundation President Rajiv Shah described what is soon to unfold as a “massive, immediate food crisis that will strike the entire world, leaving no country untouched.” War, extreme weather, and globalist export control are all contributing factors.

One need not look far to find examples of conveniences that have not been as cost-conscious as they should. Without proper oversight, and with greedy politicians, lobbyists, and developers in the United States (more prevalent in California), most are more interested in filling war chests for their November 2022 campaigns than helping our economy.

Animal Farm is a lesson in post-truth reality. In the book, the leader Napoleon (named in befitting fashion) brews lies out of thin air. He feeds these lies into public discourse thanks to his right hand mouthpiece, Squealer. You have other characters like Snowball who is exiled because he is one of great wit and capability (therefore, a threat to Napoleon) and Benjamin, who knows what is best but keeps his rationality to himself. These are characters that resonate with all readers in today’s political and social climate. Even the best of intentions can be turned around to craft tyranny and authoritarian regimes in the world.

An idea central to the book is how the ruling class casts a veil of ignorance over the public. It is easy to be brainwashed and scammed into thinking the regime is a long fabric of steady, soaring progress. Dissent is a no-no in such regimes. Any critique that comes its way is easily subjected to the iron fist of the government. But when the government or the party in power is one that parades along its own ‘liberal’ promises, how does one begin to trust the theories that attest to historical transformations heralded by the liberal masses? With a few powerholders beginning to distort the ideology and, in its place, transplant something that steers further away from political altruism, the evaluation of party rule itself turns awry.

In the Marxist view, criminals are victims of an unjust society. This is displayed today in America under Biden and Soros, and various Attorney Generals across our nation. Small business owners, grocery store clerks and citizens are under attack for ordinary everyday activity of living their lives working, traveling, stopping by a grocery store, or just picking up their children. Too many innocent citizens are attacked, brutalized, and even killed in broad daylight by thugs.

As comrades in the revolutionary struggle, criminals are more willing to deprive others of life and property, and thus prove useful. Stalin was a criminal, so the progression to mass murderer was entirely natural. In America, Black Lives Matter and Antifa have turned criminals into heroes. In Animal Farm, Rats are “comrades”. Similarly the Rats came to roost across America in 2020 with massive arson, theft, and murder, allegedly largely funded by Soros and using “appointed/not elected” Attorney Generals (along with the “Justice Department” and others) who refused to prosecute crimes and those that committed them.

As written by The Independent Institute in an article entitled From 1945 to 2022, “Politicians seeking to defund the police tacitly agree that rats/criminals are comrades. They help demolish a free society to make way for the arrangements the Left really wants.”

Meanwhile America is now being led by the addled Joe Biden, with the outlook of Rip Van Winkle socialist Bernie Sanders, and the crazy AOC squad. Most days it’s hard to tell which is which and who is who. In a society based on hatred and fear spurred by this administration, some people are much more equal than others, and only the Thought Police are efficient. It is high time that the public woke out of its Animal Farm-like slumber and see the political manipulation for what it is. Their promises of a good future and liberal rights and claims are all but wisps in the wind.

Greenfield: Under Biden, You're 4 Times More Likely to Face an IRS Audit