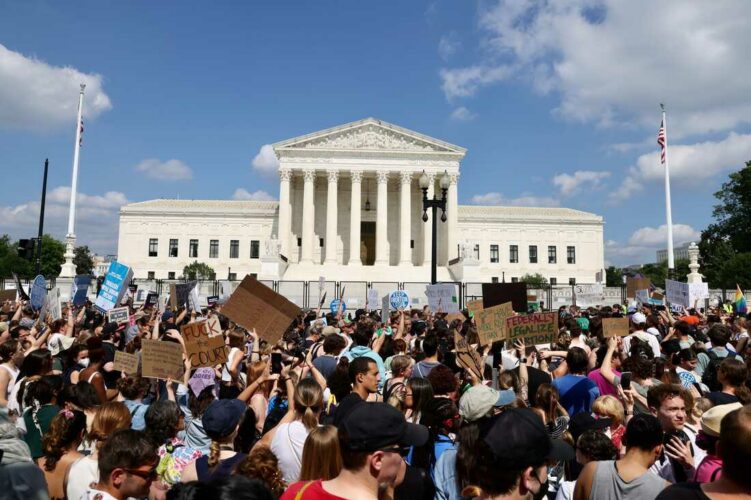 It’s been a couple of weeks now since the SCOTUS overturned Roe v. Wade and sent it back to the states. As I have stated before, this is a major blow to the radical left ideology who hold abortion sacramount to their leftist religion. So I thought it would be a good idea to see how these folks are doing. As expected, not too well.

The singer Halsey went on an abortion rant at a recent out door concert in Phoenix.

“You guys are at this concert right now, because I had an abortion that saved my life,” the singer told her fans, insinuating that she wouldn’t have been able to figure out how to become successful if she had a child. Halsey, who had her first child last summer, said “I struggled to get pregnant for a very long time.”

So you can’t have a baby and be successful at the same time? That’s just a cop out argument. And a very selfish one. And an insult to people who manage to do it and deserve our praise.

“A lot of people think that because I struggled with infertility, with endometriosis, with other reproductive illnesses, that that would mean that once I got my baby that I wouldn’t be pro-choice anymore,” the “Bad at Love” singer continued.

“Motherhood, parenthood, is not something that you can force someone into,” she added.

Then perhaps abstinence should be employed.

Halsey went on to call out the men in the audience, saying that instead of “sharing statistics on Instagram,” and “saying, ‘That’s really f*** up,’” they should be “sharing stories about how you’ve benefited from abortion somehow.”

She’s right but not the way she thinks. Let’s be real here. Men HAVE had great benefits from Roe v. Wade. It allowed them to be promiscuous without any consequences. Accidentally get a woman (sorry, “birthing people”) pregnant? No problem. Just get her to have an abortion. It is amazing how these radical leftists don’t see this and how it works totally against everything they claim they stand for.

“The truth is that my heart breaks looking out into this audience, because I see so many people who deserve to have incredible lives — who deserve the right to choose themselves,” she said.

But not the baby of course. They have no choice. They could have had incredible lives, too.

“If you don’t like it, you can go home right now,” Halsey added.

Halsey’s fans did just that, walking out of the venue after her pro-abortion rant.

“THE AMOUNT OF PEOPLE WHO JUST WALKED OUT OF THE HALSEY CONCERT AFTER NIGHTMARE WHEN SHE SPOKE ABOUT ABORTION WAS SICKENING,” one fan tweeted, to which Halsey commented, “downside of doing outdoor venues: no door to hit them on the way out.”

Jennifer Lewis is planning a sex protest. Oh my!

“I’m telling you right now what I’m gonna do,” Lewis told People. “I am going to have a protest, I don’t care if it’s 500 or 1000 women, where we lay down on every freeway and block them all in every major city at rush hour. And there will be no [sex] that day. Shut it down.”

Whew! No sex on the freeway. Glad we got that cleared up. This ain’t Woodstock you know.

Actress Lily Allen had this to say:

“I wish people would stop posting examples of exceptional reasons for having abortions. Most people I know, myself included, just didn’t want to have a f***ing baby,” the singer wrote in an Instagram Story.

“AND THAT IS REASON ENOUGH! WE DON’T HAVE TO JUSTIFY IT,” Allen added.

Lily, Lily, Lily. You just destroyed the leftist template about rape/incest and threat to the life of the mother as the main reasons abortions are done. Without knowing it, you have just made the pro-life argument that the largest majority of abortions are done for convenience. Don’t you love it when the left slips and says what they REALLY mean?

“TODAY, TRUMPS RADICAL (REPUBLICAN) SUPREME COURT,BECAME RESPONSIBLE FOR THE DEATHS OF HUNDREDS OF THOUSANDS OF AMERICAN WOMEN.THEY CAN’T BE PROSECUTED, BUT MAKE NO MISTAKE… “THEY ARE GUILTY” WHAT OTHER RIGHTS (WE TAKE 4 GRANTED) ARE NEXT BE AFRAID BE VERY AFRAID”

Over 40 million babies have had their lives snuffed out since 1973. Why aren’t the 7 judges who voted for abortion guilty for the deaths of these babies?

As usual the media arm of the Democrat Party had a meltdown:

Joyce Vance , MSNBC: “This is a tough situation. I think we all knew that this was coming. I think we expected for it to feel bad. I’m not sure we all fully appreciated how devastating it would feel to to see the words on the paper condemning women to second-class citizenship.”

Babies in the womb have been second class citizens to the left for half a century.

Terry Moran, ABC: “Alito had written previously that, ‘We cannot allow our decisions to be affected by any extraneous influences such as concern about the public’s reaction to our work,’ Moran noted, continuing: “that’s exactly what they’ve done here; they’ve ignored any potential public reaction.”

You mean like death threats to a sitting Supreme Court judge? How dare he not cave to the mob! Hey Terry, this is exactly what judges should be doing, you ignoramus. There are times when I wish the leftist media had to experience some of these things that they appear to promote. They would be crying like babies.

Chuck Todd, NBC: “I think there are no more black robes. I think the robes are red and blue.” He added, “There really is a lot of people who believe that this is a rigged court.”

Funny how it wasn’t rigged when 7 justices found a non-existent right to privacy to legalize abortion in 1973. And Chuck, who made it a partisan battle? It was your side.

Despite all these rantings, there are no indications as of now that the overturning of Roe v. Wade is changing the dynamics of the mid-term elections. Joe Biden is talking about removing the filibuster in order to codify Roe. They apparently have forgotten that eliminating the filibuster (as Harry Reid did for Federal judges) can boomerang on you as this opened the door for Trump’s nominations. Besides, Joe Manchin and Kyrsten Sinema have already indicated they will not vote to end the filibuster. So it’s DOA. And making this an issue means that Democrats will have to explain why they are for abortion at anytime during the pregnancy. That’s not a winning issue. My guess is that if they make it a major campaign theme, it will be along the usual lines of “my body my choice” or “reproductive freedom” etc. But I imagine most voters are more concerned about the horrible economy, gas prices and their retirement funds. It still looks like a very good year for the GOP.