The Atlanta Journal Constitution reported that a sign designating a building as the Clarence Thomas Center for Historic Preservation had been removed. The Savannah College of Art and Design has issued no official statement, but the paper cited a petition started by Griffin Hansen, a Bernie Sanders supporter who had once attended the school. 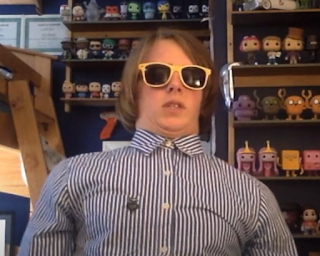 Hansen, a white cartoonist, who lists his pronouns and likes Pokemon, targeted the only black male justice on the court. The Boston resident who calls himself a “Gruppeteer” claimed that since “SCAD’s student body is comprised of 69% women” and “an overwhelming majority of students at the school identify themselves as members of the LGBTQ+ community”, naming a building after a conservative black man is “unacceptable”. (He failed to mention that in a city that is majority black, only 11% of SCAD’s students are black. Most are white with pronouns.)

The white woke student proposed 5 alternative names: 4 out of 5 of whom are white.

A previous petition to rename the building where Justice Thomas had once been an altar boy had been generated by Sage Lucero, a former student and a white woman from Aspen who went on to work on ad campaigns for Oreo and Kroger.

“I don’t want any other female who has hopes and dreams to have to walk through the doors of that building. They shouldn’t have to be subjugated to that toxic feeling,” Lucero, who lists her alter ego as “Rage”, contended at the time.

A news story also quoted Sarah Boussey, a white student, who claimed that naming a building after the conservative black jurist sends the wrong message.

“Something needs to change,” she complained.

Boussy has since become a designer at CNN.

Lucero later took down the petition claiming that she was the real victim of the attempt to cancel Thomas and whined, “I no longer feel safe moving forward with this.” This follows a familiar pattern of woke lynch mobs claiming that they, not those whom they targeted, are the victims.

At George Washington University, Jon Kay, a junior majoring in international affairs and philosophy, started a petition claiming thatJustice Thomas teaching at the university was “completely unacceptable”, and accusing him of taking away “the ability for people to practice safe sex without fear of pregnancy”.

Kay, who is a white man, then accused Justice Thomas, who is 74-years old, of “endangering the lives of the students on campus.”

Unlike the Savannah College of Art and Design, George Washington University responded by making it clear that it had no intention of barring the only black male justice from campus.

However Kay, bragging about interviews with CNN, Politico, and Forbes, told followers that “the push is not stopping here” and boasted that “several organizations affiliated with our cause are planning events and actions to reinforce our cause.”

The cause being that of driving a black man off campus.

The new set of petitions, seemingly spurred by the Dobbs decision, targeted only one of the five justices who voted with the majority and who is also the only black man on the court.

The students and former students targeting Thomas are white and woke.

And the same colleges, media outlets, and cancel culture mobs that can find racism in a grain of sand also see nothing wrong with a white woke lynch mob coming after a black man.

The racist attempt to cancel Justice Clarence Thomas is being waged by two white men and a white woman who make a point of stating their pronouns and probably have copies of Ibram X. Kendi and Ta-Nehisi Coates’ racist anti-racism tracts sitting on their bookshelves.

Racism, they think, is something Republicans do. It’s not something that they could be guilty of.

They, doubtless, dip their devices into a social justice media newsfeed that discovers racism in all sorts of statistical blips and disproportionate numbers. But in a culture where everything is racist, the one thing that isn’t racist, and never will be, is lynching a black man.

As long as he’s a conservative black man.

The lynch mobs are made up of the skinny white hipster men in ironic t-shirts and dumpy hipster women with colored hair who still watch cartoons and stuff themselves with soy. The new Klan, despite boasting 74 genders and an expanding section of the alphabet followed by a plus sign to allow for the discovery of new sexual lifestyles, is not very diverse. It’s not only white, but so culturally homogenous that its members share the same insipid tastes and free-floating rage.

But they think they don’t look anything like the Klan, although they have their own “invisible empire” that advances their careers and puts them in key positions at major corporations.

There is a reason why the same media outlets that take great pains to list the races involved in a bad customer service exchange or police shooting (as long as the alleged perpetrator is white and the alleged victim is black) never bother to note that the petitions to cancel Thomas keep coming from white men and women. That would be politically incorrect and inconvenient.

Daniel Elder, a liberal Nashville composer, became unemployable after merely condemning the violence during the Black Lives Matter riots. None of the white woke activists who set out to lynch the only black man on the highest court of the land will suffer any consequences for it.

On the contrary, the woke KKK will reward them with plum positions for their political service.

This is what social justice looks like at the hands of the new woke Klan.

Emery McClendon: Why Socialism and the Systemic Destruction of America Must Be Stopped