“Andrew has lived the American dream. And if you give him your vote he will fight to make sure every child in Florida has the same chance,” he gushed.

That was four years ago. 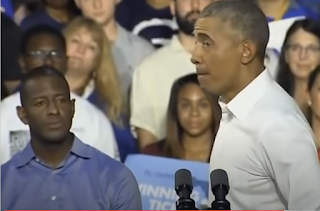 Then he announced that he would be going to rehab because he was depressed over losing to Gov. Ron DeSantis.

Hopefully no other American child ever gets the chance to live out that particular dream.

Now Gillum continues living out Obama’s dream by being indicted on 21 charges stemming from an FBI investigation dating back to 2016. The investigation was known when Obama and the Democrats decided to “make history” and champion him to run Florida.

Obama claimed at the rally that “the character of our country is on the ballot.” He wasn’t wrong.

The Gillum indictment lays out how the former mayor and aspiring governor and his allies moved money through a variety of non-profits and PACs including the National Black Justice Coalition.

The National Black Justice Coalition describes itself as “America’s leading national civil rights organization dedicated to the empowerment of black lesbian, gay, bisexual” and, transgenders. It also boasts of having “enlisted the leadership and partnership of Andrew Gillum to help build the strategy and blueprint for this network, at every level” as part of its “Good Trouble Network”.

I’m not so sure that a 21-count indictment really qualifies as “good trouble”.

The indictment also accuses Sharon Lettman-Hicks, the CEO of NBJC, of diverting $50,000 for Gillum’s use. The NBJC has intersected with the Soros network, it’s signed any number of letters, petitions, and activist agendas alongside top lefty organizations. And it’s been funded by the Kresge Foundation, the Haas foundation, and the Tzedek Social Justice Fund among many others.

This awkwardness might explain why Gillum is being repped by a top party consigliere.

Gillum is being represented by Marc Elias, Hillary Clinton’s presidential campaign general counsel, a rumored key Russiagate figure, Kamala’s general counsel and Biden’s go-to-lawyer for the 2020 election. Elias is not the guy who represents you when you’ve become a complete disgrace and the Democrats want nothing more to do with you. Gillum’s lawyer shows that the hand of the party still rests benevolently on the head of its former favorite Florida son.

“We look forward to putting this case to rest and giving Andrew and his family peace of mind once and for all,” Elias claimed. The top Democrat lawyer failed to clarify which family considering that Gillum claimed that he was bisexual in the wake of the hotel incident.

By claiming that he “identifies as bisexual”, Gillum made history all over again and spurred a range of favorable publicity along with mentions of the National Black Justice Coalition.

And the second and third chances just kept right on coming.

In 2019, Gillum handed a giant $100,000 check to the chair of the Florida Democratic Party from his PAC Forward Florida Action. Then it turned out that giant checks can’t be cashed and the money didn’t exist. The indictment mentions that Forward Florida, a related group, played a role in what the indictment describes as Gillum and Hicks having “defrauded Individual F of $150,000 of his $250,000 contribution”. Elias’ defense in this regard may prove instructive.

Democrats have not abandoned Gillum throughout his downward luge slide through politics.

Gillum’s appeal in the last decade was obvious. Democrats were looking for more Obamas and they found Cory Booker, Gillum, and a number of other young black technocrats whose rhetoric fused Big Tech and the Baptist church. The Obama effect was the illusion that the Left could comfortably bridge the contradictions between its white elites and its black base, between the values of Martha’s Vineyard and the inner city without having to give up any power or control.

The answer was a black technocratic leadership under a horde of imitation Obamas who would all fly to Davos and come back to explain why everyone needed to ride bikes and eat soy.

In the twenty-twenties, Obama and his ideology have dated about as well as the Arab Spring. And some of the mini-Obamas, like Gilllum, have wilted even more badly in the face of history.

“We have an opportunity to send both Mr. DeSantis and Mr. Trump a message,” Gillum had boasted at the Obama rally. “We have a chance to send them an unapologetic message: that their brand of politics is no longer acceptable in the state of Florida.”

Instead, Obama and Gillum’s politics have become unacceptable in Florida.

History has happened. Florida has gone from a swing state to a Republican one. Under the man who beat Gillum, it’s attracting refugees from blue states and growing at a record rate. And Gillum continues to make his own kind of history by sinking to new lows with his party.

“’The Obama Excitement’: Can Andrew Gillum Capture It?” the Washington Post asked.

It’s safe to say that he has.

Gillum’s campaign line used to be, “Bring it home.” Now, as Obama’s pastor used to say, the chickens are coming home to roost. The justice system is trying to bring Gillum home.

“I have spent the last 20 years of my life in public service and continue to fight for the people,” Gillum responded to the indictment.

The last time Gillum held public office was in 2018. There have been various misconduct allegations against him going back to 2014 when he first ran for mayor. His public service since then mainly seems to consist of angrily tweeting things about Gov. Ron DeSantis.

“DeSantis and Republicans want to erase us from the History books and now from the Halls of Congress. Voters will remember this Maduro/Putin-tyranny in November and beyond. NOT today Satan!” Gillum, who has denied using meth, tweeted back in May.

It wasn’t all that long ago that Obama was hailing Gillum as “one of the most inspiring, gifted candidates”. Biden, apparently reading from the same teleprompter, touted him as “one of the most exciting, new, young leaders” who was on the way to “reclaiming America’s soul”.

Instead Gillum, like Obama and Biden, lost his soul, and shows no signs of getting it back.

Florida, once in play, now appears as out of reach for Democrats as Gillum’s political career. But no matter how many scandals Gillum gets into, there’s always someone to write his comeback narrative.

“Will America Accept Andrew Gillum?” Slate asked a few years ago after he came out as bisexual. “Don’t write him off yet.”

The Feds, to give them credit, haven’t. Neither apparently have the Democrats.