In the summer of 2020, President Trump imposed sanctions on TikTok, and in the next summer, Biden lifted them in his own executive order. While the Biden administration claimed that it would scrutinize the Chinese Communist company, there was an obvious ulterior motive. 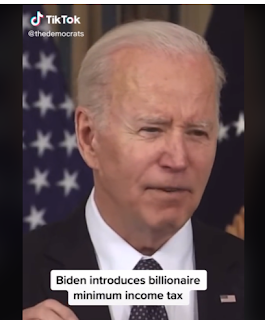 It’s impossible to believe that the two White House decisions to revoke the TikTok order and to mobilize TikTok influencers made in the same month were unrelated.

Once again, Biden’s political interests trumped national security. As it did for the Democrats.

While the White House doesn’t have a TikTok account, “Building Back Together”, a Biden allied non-profit, has a TikTok account trying to boost his popularity among Latinos.

During the presidential campaign, the DNC warned staffers against “using TikTok on personal devices” and urged them to use a “separate phone and account” instead. This year, the DNC officially joined TikTok. The DNC’s account features videos of Biden and Kamala, along with attacks on Republicans. The RNC’s refusal to join TikTok has turned it into a Democrat platform.

Albeit one controlled by Chinese Communists.

A BuzzFeed report in June 2022 revealed that, just as the Trump administration had warned, American user data was being accessed from China. “Everything is seen in China,” the report revealed. One consultant observed that, “there’s some backdoor to access user data in almost all of them”.

Part of the true cost of China’s ongoing ownership can be seen in a lawsuit filed by the Social Media Victims Law Center which described how an 8-year-old and a 9-year-old girl died of “self-strangulation” after being encouraged to take part “in TikTok’s Blackout Challenge, which encourages users to choke themselves with belts, purse strings or other similar items until passing out.”

The lawsuit alleges that “TikTok’s dangerous algorithm intentionally and repeatedly pushed the deadly ‘Blackout Challenge’ into both Lalani and Arriani’s TikTok ‘For You Page'” That means, according to the lawsuit, that TikTok had “specifically curated and determined that these Blackout Challenge videos – videos featuring users who purposefully strangulate themselves until losing consciousness – are appropriate and fitting for small children”.

Arriani, the 9-year-old girl, was found “hanging by her dog’s leash which she had affixed to the door to her room. She had been in this condition for at least a half-hour in front of her 5-year-old brother.” Lalani, the 8-year-old girl, was found “hanging from her bed with a rope around her neck still warm to the touch. Lalani had laid out her bathing suit in anticipation of going swimming.”

The two girls are one of seven children to have died as a result of the “blackout challenge”.

Five of the children, including 12-year-olds in Colorado and Oklahoma, and a 10-year-old in Pennsylvania, are Americans.

These are only some of the dozens of deaths linked back to various TikTok challenges.

While China’s Communist party closely regulates its own domestic social media, companies are encouraged to abuse and take advantage of foreign nations, especially enemies, with everything from shipping fentanyl precursors to encouraging child mutilation and suicide.

TikTok is part of China’s war against America.

While Douyin, TikTok’s version in China, closely regulates content, limiting children to 40 minutes a day and banning, “licentiousness, vulgarity” and the “subversion of traditional moral values”, TikTok does everything possible to destroy America’s children while buying politicians.

ByteDance, TikTok’s Chinese owner, has increased its lobbying outlays “tenfold”. TikTok’s director of global policy, Michael Hacker, is a former senior adviser to Rep. Clyburn, who is not only the third highest ranking House Democrat in the leadership, but also helped put Biden in the White House and commands his ear. ByteDance has even helped fund a scholarship for the James E. Clyburn Scholarship & Research Foundation. The Clyburn Foundation claims that it helps children and builds “healthy communities”. Perhaps Rep. Clyburn can explain how the dead children of TikTok, at least one of whom was black, were helped by his blood money.

Another public policy figure at TikTok, Michael Bloom, had spent a decade working for Nancy Pelosi, including as her senior adviser until 2017. While the TikTok team also includes plenty of vets from the GOP side of the aisle, it’s the Democrats who have given TikTok a pass.

And American children have paid the price with their mental health and their lives.

It’s not only elected officials who are to blame. Google, Apple, and Amazon rapidly purged Parler, a conservative social media app, in order to silence conservatives, but have refused to take action against TikTok. Indeed searches for the term on Google quickly fill with TikTok videos. Including at least one direct link to a blackout challenge video hosted on TikTok.

Michael Beckerman, the former president and CEO of the Internet Association, an industry lobby whose members include Google, Amazon and Twitter, now heads TikTok’s policy operation. A number of other IA vets are also working for the Chinese spy operation now.

Beckerman had assured Senate members that, “We do not share information with the Chinese government” and “We have a world-renowned U.S. based security team that handles access.”

Big Tech companies have been very eager to deplatform conservative voices and apps to “fight misinformation”, yet are uninterested in removing an app which violates their own terms of service by spying on users, especially minors, and which has killed 7 children.

The Biden administration has convened task forces to fight speech in this country it considers “misinformation”, yet has refused to stop a Chinese company from causing child suicides.

Biden chose to give TikTok a pass at the same time that his advisers decided that it would be politically useful. American children died so Biden could recruit an “army of influencers”.

Doubling Down on Their Double Standards