“The university’s contentious colonial moniker must go. Even the university’s name, mascot and motto — ‘Hail Thee George Washington’— must be replaced,” The op-ed demanded.

Conveniently the op-ed did not propose to rename the paper it was running in. 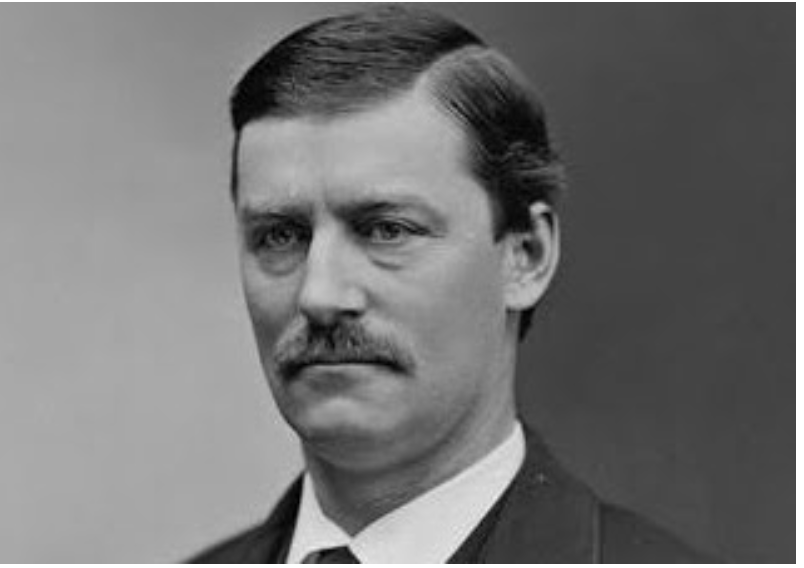 But the Washington Post has bigger problems than that. Its founder, Stilson Hutchins, like many Democrats, was a militant supporter of the Confederacy and even named one of his sons after Robert E. Lee. Long before he founded the Post, Hutchins had been editor of the North Iowan where he and other Democrats promised to defeat “Black Republicans”.During the Civil War, Dennis Mahony, Stilson’s superior while working on the Dubuque Herald, was arrested over his support for the Confederacy. Stilson and Mahony later went on to found the St. Louis Star.At the Herald, Stilson had editorialized, “Who wants Iowa covered with indolent blacks? Answer at the polls.”

Hutchins, in the words of a cheerful profile by the Washington Post, left after Reconstruction and then “launched a bold, possibly even reckless plan: to start a Democratic newspaper in the Republican-run capital of the United States.”

The name, The Washington Post, came from Hutchins’ managing editor, John Cockerill, a former Confederate drummer boy, who had gotten his start in the press working at the Dayton Empire under Clement Vallandigham, the Copperhead Democrat leader who was arrested and tried for treason during the Civil War. (Cockerill would later kill one of his critics in an exchange of gunfire.)

And, as the Washington Post noted, the paper’s original “city editor was Frederick Aiken, who had been one of Mary Surratt’s defense attorneys in her trial for conspiracy to assassinate Abraham Lincoln.”

The Washington Post was founded, named, and run by Confederates and their Democrat allies.

The paper was also predictably racist. One editorial urged that Washington D.C. would be “wealthier, healthier and happier for an immediate exodus of 15,000 or 20,000 of her Negro population.” Otherwise there would have to be “a firm, but benevolent movement on the part of the white race as a whole to disabuse the negro of the delusions which have been instilled in him during the last dozen years.”

The same paper that has called for the heads, or at least the heads of the statues of George Washington, Thomas Jefferson, and countless other Founding Fathers and national heroes, has carefully avoided any kind of reckoning. It’s not that the Post’s people don’t know the history, they have just carefully avoided any significant discussion of their social justice rag’s ugly past.

There’s curiously little interest in the origins of one of the country’s two most influential papers.

Stilson, who later bought a former slave plantation, went on to marry a woman half his age who then tried to have him declared insane. Ownership of the Post does come with a history of insanity. Ned McLean, whose own descent into insanity was attributed to his ownership of the Hope Diamond, might have been more accurately attributed to owning the Post.

(McLean has also been blamed for using the Washington Post to help incite some of the violence during the 1919 race riots in Washington D.C.)

Five years after buying the Washington Post, Bezos broke up his marriage, left his job as Amazon’s CEO, and has taken to blaming the exposure of his affair with a guest host from The View on a conspiracy involving the National Enquirer, Trump, and the Saudi monarchy.

At one point even the UN got involved in investigating the provenance of his genitalia photos.

Aside from the racism, the Washington Post seems to drive its owners mad. Literally. But the true insanity is the Post putting “Democracy Dies in Darkness” and then avoiding any discussion of its own dark past. A more accurate motto might be, “History Dies in Darkness.”

America is not systemically racist, but the Washington Post originated as one of the most racist papers in the country. The past is not the present and most people understand that. But the social justice paper insists on attacking the country and its people as a bunch of racists.

And it carefully avoids engaging with its own history.

The Washington Post came to life as a project by Democrat Confederates and Copperheads to avenge their losses in the Civil War and roll back Reconstruction. That doesn’t mean that the paper is doomed to be racist. Systemic racism, like racial essentialism and other assumptions that people individually and collectively are unchanging and unchangeable, is a racist myth.

But the Washington Post insists that everyone else can’t change, but that it somehow has.

All white people are racist, except its owner who has his own mega-yacht.

Last year, the Washington Post featured a video urging white people to take the blame for racism by “understanding your whiteness and the ways that white supremacy benefits you” and joining “white accountability groups.”

Despite its origins in actual white supremacy, the paper has yet to join one of its own groups.