After the Uvalde school shooting, Biden, the CDC and the media are pushing a misleading claim that, “firearms were the leading cause of death for kids one and older for the first time in 2020.” 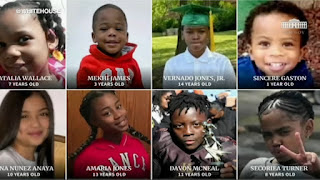 There’s no statistical reason for the CDC to group infants and teenagers together into the same category except to push a gun control agenda. 1-year-olds and 19-year-olds don’t have much in common when it comes to gun violence. And when the numbers are broken down, teenagers have catastrophically high murder and suicide rates, while babies are much less affected.

The CDC’s letter to the New England Journal of Medicine claims that “in 2020, firearm-related injuries became the leading cause of death” for “persons 1 to 19 years of age”. It blames that on the “COVID-19 pandemic” while shrugging that “the reasons for the increase are unclear”.

Blaming the upsurge in Chicago gang members shooting each other on a virus out of China based on correlation rather than causation is bound to lead to very “unclear” reasons.

The CDC buries the salient data in its appendix. It claims that the “increase was seen across most demographic characteristics”. Its own data however shows a massive increase among black teens and a fairly limited one among most other groups.

The CDC began “researching” gun violence for the first time last year and its latest release is a useful reminder of why Republicans and 2nd Amendment groups fought against letting it do it.

What the CDC is hiding is much more disturbing than its dishonest attempt to push gun control by panicking parents with statistical manipulation so bad it would embarrass a push pollster.

The Johns Hopkins report on gun deaths in 2020 put out last month was much more revealing.

Even though young black males only make up “2% of the total population”, they account for “38% of all gun homicide fatalities” with a gun homicide rate “almost 21 times higher than white males of the same age group.”

You would think that the CDC would be interested in these numbers, instead of trying to hide them by combining all the demographics together and then conflating the risk for an Asian toddler in Marin with a black teen in Chicago in order to claim that “gun violence” is a crisis.

The crisis here is crime.

Black Lives Matter has called the rare police shootings of black men, “genocide”. But the real genocide is coming from inside the house. Even well before this the CDC’s own numbers found that among black men under the age of 20, homicide is the leading cause of death at 35.3%

Homicide doesn’t even make the CDC’s top 10 causes of death for men in America, but it’s number four for black men.

The Johns Hopkins report tries to blame the murder rate on “systemic inequalities— hypersegregation, discrimination, lack of economic opportunities, and under-resourced public services”. But none of that actually explains why gang members are shooting each other.

Last week, a 13-year-old was shot walking down the street in Chicago. A week earlier, “two more people were shot in the Loop after police said two children opened fire on a group of people shortly before midnight.” Those kids didn’t open fire because of “discrimination”.

The Johns Hopkins report claims that in 2020 the “49% increase in Black females who died by gun homicide compared to 2019” was due to “structural inequities that increase the risk of interpersonal violence”. Much as Russians were expected to believe that there was not enough food to go around in a Communist country because of the capitalists, Americans are supposed to think that black men are shooting black women because of “structural inequities”.

Were there suddenly 49% more “structural inequities” in 2020? Or did shutting down the criminal justice system at the behest of the Left and its Black Lives Matter puppets make it far more likely that black men, women, and children would be shot by unimprisoned criminals?

This isn’t a gun violence problem. Or a minority discrimination problem. All of those are lies.

The CDC and various organizations and universities claim that they want to “research” gun violence. But their research lies about what’s going on in order to restrict the Bill of Rights.

The country is coping with a catastrophic crisis, but it’s largely confined to the black community.

School shootings have been normalized by the media which eagerly makes celebrities out of a rotating cast of psychos hoping that if they shoot enough kids, they’ll get on the evening news. And the media hopes that if enough suburban kids get shot, they can abolish the 2nd Amendment. Studies have repeatedly linked media coverage to school shootings. The media knows about them, but is willing to incite more shootings for the higher cause of gun control.

“Studies indicate that the more media attention a shooter gets, the more likely the event will inspire a future mass shooter,” a National Center for Health Research paper noted. “A 2015 study found that after a mass shooting, there was an increased chance of another one occurring in the next 13 days. A 2017 study found that media coverage of a mass shooting may increase the frequency and lethality of future shootings for much longer than two weeks,”

But school shootings are, like the CDC’s numbers, a misleading attempt at treating an abnormal event as characteristic of the vast majority of shootings which involve gang violence and crime.

The massive escalation in violence in the year of the Black Lives Matter race riots is vitally important because it tells us once again that what we’re seeing are pro-crime policies at work.

The increases in crime within a fairly short time correlate perfectly with a series of disastrous “criminal justice reform” measures that police departments, prosecutors, and journalists, including Front Page Magazine, warned would lead to catastrophic crime rates. Despite being proven right, Democrats and some Republicans continue to be invested in more “reforms”.

The death toll among black people in the year of Black Lives Matter shows the bloody price of those reforms. As numbers continue emerging for 2020 and then 2021, we will learn more.

And the CDC and the rest of the woke public health bureaucracy will try to cover them up.