It was the summer of 2020. Black Lives Matter riots were terrorizing, destroying, and burning American cities. And the first black deputy commander of Air Force Global Strike Command told everyone in the Air Force that he was terrified that white people could kill him at any moment.

“Here I am as a lieutenant general in the United States Air Force,” then Lt. Gen Anthony Cotton whined to Air Force Magazine. “When I see what happened to Ahmaud Arbery, Breonna Taylor, George Floyd, Rayshard Brooks—and the list goes on and on.”

“That could be me,” he claimed. 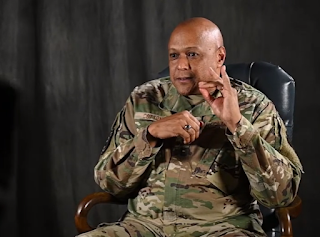 Since Cotton was, unlike Breonna Taylor, probably not harboring an armed drug dealer who opened fire on police or, unlike George Floyd, overdosing on fentanyl during a struggle with police as the climax to a long criminal career, that was a disingenuous smear from a top officer.

The spectacle of successful black men like Obama, Merck CEO Kenneth Frazier, or Gen. Anthony Cotton falsely claiming that America is so racist that any of them could suffer the fate of career criminals simply because of an accident of skin color is pathetic and disgusting. The Merck CEO or the Air Force general are as likely to suffer the fate of George Floyd as their white counterparts are to end up like a dead white meth addict shot in a raid in Georgia.

Two years after complaining about police lights flashing in his rearview mirror and someone challenging his parking spot, Cotton has been nominated by Biden to head U.S. Strategic Command.

It’s been a rapid ascent for Gen. Anthony Cotton who had been appointed to head Air Force Global Strike Command last year, after being Deputy Commander of the same in 2019, up from the head of Air University in 2018. Air University, like a lot of Air Force and Navy educational institutions, had gone painfully woke. And Cotton earned his political stripes in the process.

Gen. Anthony Cotton, a four-star general, racked up some “firsts” attached to his name in the Black Lives Matter era, but that never seems to lessen the accusations of racism.

Charles Q. Brown, Jr. is the Air Force’s first black chief of staff, and has been tipped to replace Chairman of the Joint Chiefs, Gen. Milley. That hadn’t stopped Brown from crying racism and smearing the country he claims to serve.

In a speech in which Brown “seemed to barely contain his rage”, he ranted “that the ideals of the Declaration of Independence and the Constitution ‘that I’ve sworn my adult life to support and defend’ have not always delivered ‘liberty and equality’ to all.”

“I am a Black man who happens to be the Chief Master Sergeant of the Air Force,” Kaleth O. Wright, the second black man to serve as the highest ranking noncommissioned officer, tweeted. “I am George Floyd…I am Philando Castile, I am Michael Brown.”

Cotton is following a familiar identity politics career model that’s bad for America, but good for unprincipled men who are willing to smear their country and play the victim.

Last year, Cotton claimed that “diversity, inclusion are tools for national defense” and that diversity is a “warfighting imperative”. Perhaps actually winning wars would be imperative.

Has the Air Force become any more lethal on the battlefield ever?

“This team is exactly what we are looking for,” Cotton said of the Diversity and Inclusion Council at Malmstrom Air Force Base. “It is a diverse and unified team that is having crucial conversations about diversity and inclusion.”

The Montana Air Force base near Great Falls now has a Pride Month and will be spreading “unconscious bias training” which claims that all white people are racist.

Malmstrom has had a number of issues. Its nuclear missile unit has failed safety and security inspections, and bungled a response to a “simulated hostile takeover of a silo housing a nuclear missile”. There was also a cheating scandal involving 34 missile launch officers during a nuclear proficiency test and many more who knew about the cheating, but didn’t report it.

This was part of a string of problems going back over a decade. Cotton had been in charge of ICBMs at Malmstrom from 2009 to 2011. And he’s gone on climbing the ladder ever since.

Malmstrom’s nuclear arsenal is there to deter a nuclear war or end it quickly if it begins.

Having “crucial conversations about diversity” is not its mission, maintaining security procedures and being ready to kill one hundred million people in China, if necessary, is.

Are woke missileers who have conversations about how racist America is better at their jobs?

As head of U.S. Strategic Command, Gen. Cotton will have a leading responsibility in defending or going on the offensive against America’s enemies. But does he view America as the enemy?

Now that its leadership is “diverse” in the sense of being concentrated among members of a single race who agree that the country they claim to serve is a racist place that randomly kills black people on account of their race, is the Air Force any better for it?

FrontPage Magazine’s latest pamphlet, How Obama and Biden Destroyed the Greatest Military the World Has Ever Seen, documents how readiness rates for F-22 stealth fighters are at the halfway mark, CV-22 Ospreys are at 50%, F-35As are at 68%, F-15E’s are at 66%, and the B-1 Lancer is at 40%. The B-1s are under Air Force Global Strike Command.

Instead of cleaning house, the Biden administration is rewarding failure and doubling down on wokeness. The Air Force isn’t ready for a major war, but its diverse leaders are eager to fight one against other Americans.

In an interview with Air Force Magazine, Cotton was described as saying that he “hopes the U.S. can reach a point where he doesn’t have to talk to his adult children about how to stay safe every week” from what is apparently the lurking menace of evil white people everywhere.

Given the opportunity, you have to wonder whether Cotton would nuke Beijing or Texas.

“It’s time for our nation to really dive into this and get after it—once and for all. And hopefully, you know, I don’t have to have those conversations with my kids,” he complained.

Perhaps it’s time for the Air Force to stop having conversations about racism mandated by racists and for our nation to stop handing over our national defense to those who hate her.