Walk down the aisle of any any woke supermarket whose patrons drive electric SUVs with Bernie stickers and you’ll find shortages of everything except “plant-based substitutes” for real food. Don’t bother looking for rotisserie chicken, there’s a shortage. Forget the eggs, they’re not only cage-free and going at the rate of three for a dollar, they’re also more absent than Biden. 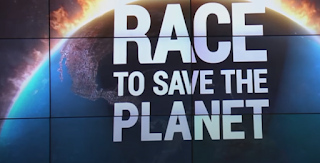 Milk can be had in every possible variety except the kind that comes from a cow. The stock of ‘ersatz’ alternatives to milk testify to the green gold rush touched off by the urgent need to save the planet. Cows, despite roaming the plains for thousands of years before Al Gore, Greta Thunberg and Teslas, are bad for the earth. But so it turns out is absolutely everything else.

“Revolution is like Saturn, it devours its own children,” a fictional Danton famously declaimed in a play about the world’s original leftist revolution. In the cases of the supermarket dairy aisle, the non-dairy dairy revolution is devouring itself metaphorically, but not doing as well literally.

Almond milk was going to save the planet. There were predictions that the almond milk market would be worth $13 billion which is pretty good for something that requires enough sweetener to destroy your teeth just to taste moderately palatable. But almond milk isn’t milk since, even in a woke biological paradigm where men can be women and bees can be fish, you still can’t milk a tree. And almond milk isn’t almonds either, because it’s only about 2% almonds. What is almond milk really: it’s sugar and thirty other ways of saying sugar without actually using the ‘s’ word.

But more problematically, (and to wokes everything eventually becomes problematic), it’s also bad for the planet. A few years ago, environmentalists began claiming that almond milk was hurting bees. Reliable scientific journals like People Magazine and Men’s Journal raved, “The World’s Almond Milk Craze Is Killing Bees at a Staggering Rate” and “Almond Milk Is Killing Billions of Honey Bees.” So much for saving the planet by milking trees into a vile pale fluid.

There are of course people who genuinely need dairy alternatives, but the woke obsession with “plant-based alternatives” has the same medical basis as the gluten allergy that activist coeds developed shortly before they began waving “Black Lives Matter” signs on campuses.

Fake milk had become about the serious business of saving the planet from mankind.

And so after the almond milk revolution failed, it was on to rice milk, which was projected to reach $1 billion by 2032 despite being 88% water. But rice milk turned out to be the most polluting fake milk around. Rice paddies, even without any cows around, “are full of methane-producing bacteria.”

Wokes don’t object to the bacteria, they marinate in it, but they are against methane.

People who drive their Land Rover electric SUVs with a bike rack on top so that they can park a block away and then bike to work switched to oat milk. Oat milk, which is even worse than almond milk, but according to two out of three starving Marin County alley cats beats rice milk, was projected to have a market share worth $7.6 billion by 2028. But then Oatly, a Swedish vegan brand of oat milk, was accused of ties to former President Trump because Senator Mitch McConnell’s brother-in-law was on the board of a company that had invested in it.

Soon wokes were trying to set their Swedish vegan oat milk on fire and failing miserably.

Exhausted suburban wokies, fresh from Black Lives Matter struggle sessions waged at cocktail parties with hardcover copies of Ibram X. Kendi coloring books, tried soy milk, but stopped once their husbands began joining the women’s swim team. Also the soy business is being blamed for the destruction of the Amazon rainforest. Saving the planet without destroying it is hard work.

In the face of all the fake milk wars, the virtue signaling and the smear campaigns, the Twitter hashtag boycotts and calls for divestment, coconut milk seemed like an easy compromise.

Until the monkeys arrived.

The global coconut milk market is projected to hit $2.9 billion which is pretty good for a bunch of monkeys. Coconuts come from Thailand and the easiest way to pick them is to send a monkey.

A monkey can pick a thousand coconuts a day, a human worker can manage less than 80, while a woke employee wouldn’t even do one before claiming to feel unsafe and launching a Twitter protest. But Thailand’s coconut monkeys still enjoy more human rights than the Chinese slave laborers who make everything else that wokes wear, use, and virtue signal with.

PETA and animal rights groups however objected and the coconut monkey wars began.

Companies were accused of using “forced monkey labor” in contrast to the voluntary monkey labor of Hollywood film sets and national politics, not to mention the voluntary cow, sheep, goat, and chicken labor in the United States. Confused Thai coconut milk companies then had to hire consultants to prove that they were not selling monkey milk to activists who didn’t want to hear it.

Only coconuts picked by workers receiving pennies a day would be acceptable.

PETA claims that expecting monkeys to pick coconuts deprives them of any “opportunity to eat, play, or spend time with their families”. Much like Boris Johnson’s pandemic lockdowns.

How stupid can the Left’s woke virtue signaling get? Ask the unemployed monkeys.

And now the war for monkey milk has spread to America.

Two years ago, Chaokoh coconut milk claimed that it uses “zero monkey labour” and that its products are “environmentally sustainable”. Now Walmart has joined other retailers in banning it over the monkey thing. Not because monkeys handling your food is a health risk, but because it’s unfair to the monkeys to have them involved in producing fake milk for fake progressives.

All of this is exhausting and is the Left in a nutshell. Just not an almond or coconut one.

To be a leftist is to incessantly virtue signal, to demand everyone get on the highway to utopia, and then to stop, pull over on the side of the road and denounce highways as immoral.

Leftist revolutions, national or culinary, like all extremist movements break down into mutual recriminations, backbiting, purity tests, and the impossibility of ever meeting them.

Fake milk is a particularly stupid example of the same trends that pervade campuses, companies, the entertainment industry, professional sports, and anything that goes woke. To go woke is not just to go broke, but to spend all of your time worrying that you might be out of step with the party and finding relief from that anxiety only in rushing to denounce fellow leftists.

Farming anything on a large scale is an intensive process, as any farmer or functioning adult could have told wokies, that’s going to require a lot of land, a lot of cheap labor, and will impact the environment. Leftists choose not to understand this because what they really want to do is virtue signal by embracing an exciting new thing before denouncing it and all the followers who jumped on their bandwagon. The fake milk revolution will end the way all leftist revolutions do.

Wokes can’t even agree on a fake milk to virtue signal around, because they have a congenital need to turn anything no matter how small into a fractious crusade as outlets for their egos.

After the bees, the monkeys, and Mitch McConnell’s brother-in-law made it impossible for wokes to drink any of their fake milks, they might as well try to go back to real milk. If they can find any.