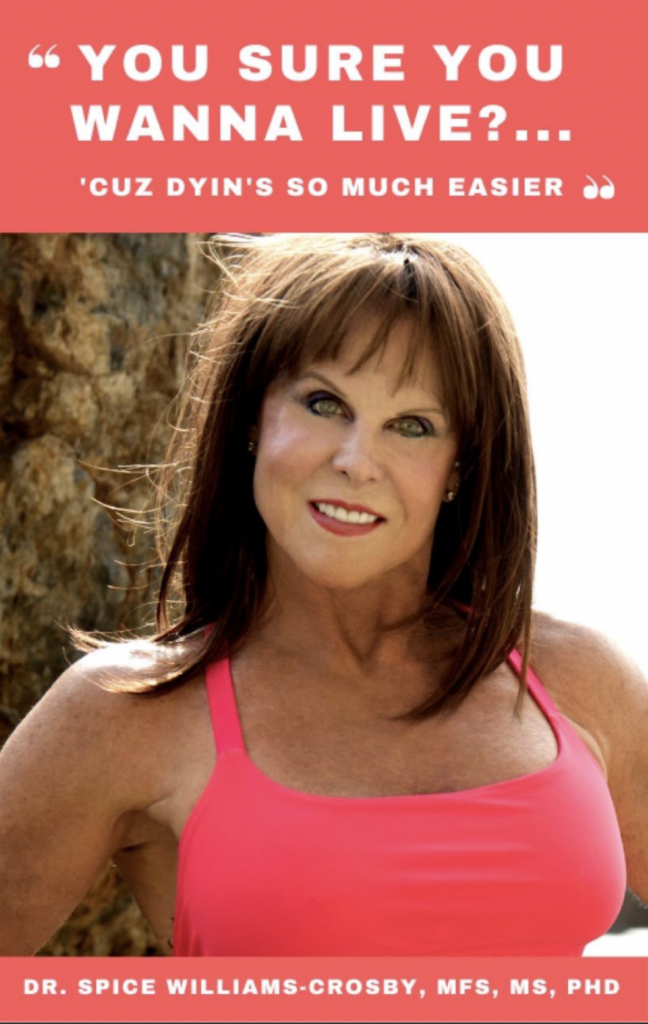 “You Sure You Want To Live? Cuz Dyin’s So Much Easier” is a ground-breaking book by Spice Williams-Crosby that everyone concerned about health will want to read. And even if not concerned this book will show why you should be.

The author may be best known as an actress (Star Trek) and Hollywood’s top stuntwoman, but she is well-educated in her field of medicine with MFS, MS and PHD degrees. She has patients across the nation who find her common sense approach to medical care, based on a strong believe in God overwhelming.

Dr. Spice makes a valid point that we have gotten away from God given gifts that should be healing, the big four being air, water, food and sleep. She describes how we have terribly polluted the first three making the third one nearly impossible for too many.

As a retired history and government teacher I wish this book had been available when I was in the classroom. The author covers the history of medication from early man through the ancient world, the middle ages to the present and we see how we have slowly been destroying ourselves with pollutants and so called virus destroying antibiotics that kill us instead of the virus. She uses excellent sources and her facts are all too clear.

It would be impossible to cover everything that should be about the information in this book however the history teacher in me made some things stand out.

One example was sadly the influence that Christianity had when the Roman Empire finally decided if you can’t beat them join them. When the Roman civilization accepted Christianity there was a feeling that bathing was a pagan ritual and anything pagan must be rejected. So for hundreds of years bathing was outlawed and there were punishments if you were caught. Naturally this led to wide spread disease and death.

As cat lover this writer was very interested in the cause of The Black Death or Plague during the middle ages, the greatest killer in human history. Because cats were seen as demonic and associated with witchcraft they were put to death in great numbers. However it was cats that kept the rat population down and it was rats that brought the disease into Europe from Asia. Dogs were killed too.

The third standout to me was how much fakery has gone on from so called experts who have been extolled by governments and in history books. I confess I was one of those who taught about what a great medical figure Louis Pasteur was and now seeing so much medical evidence I was shocked to find out what a fraud he was and how wrong he was in so many areas. And where he was correct his was guilty of plagiarism.

There is a parallel drawn later between Pasteur and our present day con doctor Anthony Fauci. Seeing evidence that the Covid vaccines have caused more harm and good with the support of Fauci and the present Democratic administration is horrifying. Especially what is being forced upon children and the story on child vaccinations goes back well before this pandemic.

Dr. Williams-Crosby makes a great point that we have a natural God given immunity that we have largely lost due to present day lifestyles and eating habits. She makes a major point on how much of what we eat has been and continues to be contaminated and big money keeps it going.

People like Dr. Fauci and organizations devoted to finding cures for cancer and other things are being made rich off the public. Government subsidies and contributions have made big money for the likes of Fauci who gets a lot of funding from Bill Gates and the Clinton Foundation.

The latter part of the book gets very technical and readers will need to do a lot of research on their own. However that seems to be our only salvation, research, research, research. Never accept any medication without knowing exactly what is in it and all side effects. Never take what you eat for granted no matter how many sales pitches you see on TV or read about in social media.

God gave us a very unique body, and experiments on rats, cats, dogs and monkeys are bogus as that is not the way we were created. If we really want to live, then we each need to become an expert on our own body.

There is so much more in this book and though I have reviewed many books over the years, never have I considered any this vital. It is also interesting that some of the things advised about diet can be found in the Old Testament of the Bible itself. God gave us our body and the expression that our body is “the Temple of God” was never more true.

You can purchase Spice Williams-Crosby’s book, ‘You Sure You Wanna Live?’ by clicking THIS LINK.