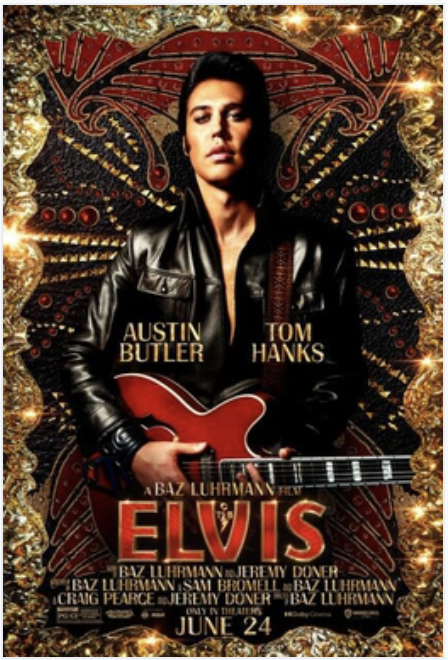 In the summer of 1976 I was visiting my best friend Pam when her mother asked if we wanted to go to a concert with her. “Elvis is going to be in Dallas!” she exclaimed. I’m not sure how we reacted, but I’m pretty sure it involved laughter and eye-rolling. We were in junior high and to our ignorant little girl brains, Elvis just wasn’t “cool” enough for us…

Not going to that concert is was one of the biggest regrets of my life.

This weekend I saw “Elvis”. Knowing Baz Luhrmann’s directing style, I was expecting his usual ultra-flashy rock docu-drama along the lines of Moulin Rouge! The previews didn’t help, making Elvis look like some superhuman neon/cartoon-y thing. My expectations weren’t very high going in.

Thankfully in spite of Luhrmann’s quirky-jerky editing, the movie is actually very “real”. It shows the sexy, larger-than-life ELVIS PRESLEY who had more charisma in one eyebrow, in one tiny curve of his mouth than most human beings should ever be allowed to possess. But true Elvis fans will be even happier to see glimpses of the original Elvis– the one with the God-given talent, natural beauty, innate kindness and love for his family and friends, and the unfortunate (but still lovely) naïveté/innocence that was too easily exploited. Those last two were key to the ultimate destruction of his soul, and his life.

In recent years Elvis was being painted as a racist and accused of ‘stealing’ black music so I was happy to see that part of revisionist history being erased in this movie. Elvis grew up in a poor, largely mixed-race community and was raised on the old-school gospel music and blues of the South. He appreciated every aspect of music and although he became famous on many of the songs black artists were singing at the time, he wasn’t stealing as much as elevating them. He was shining light on music that was hiding in the dark at the time, only heard in clubs where too many white people weren’t going back then. In the film, Elvis shares frustration that great artists like his friends BB King and Little Richard weren’t able to achieve the type of success he was having at the time.

Austin Butler stars as Elvis and he was stunning, sometimes eerie in his portrayal, matching in looks, sound, and incredible charisma. This is especially true in the ‘black leather’ Elvis Christmas special. I don’t know of any other modern-day actor who could’ve pulled off this role.

On the other hand, Tom Hanks’ portrayal of Col. Tom Parker could definitely be described as a ‘cartoon character’ both in appearance and acting style. The appearance part was possibly due to makeup that just didn’t suit his face; it looked too thick and prosthetic-y. And his acting could be described in the same way–a bit too thick and ‘prosthetic-y’. Not real or believable. I came away understanding what an evil guy Col. Parker was not because of Tom Hanks’ performance but because of the storyline and the “cause and effect” of his actions.

And the evil business dealings of Parker is the biggest revelation in ‘Elvis’. Most people–myself included–grew up believing that without the great Col. Tom Parker, there would be no ELVIS. After seeing this movie I no longer believe that myth. The way he twisted and manipulated Elvis and his entire family financially and emotionally leaves little doubt about Parker’s impact on Elvis’s life. And death.

God gives all of us our path in life and it’s up to us to choose which direction we go. But it’s the devil’s job to get us off our path. After seeing this movie I’m convinced that Col. Tom Parker was Elvis’s devil.

Might Elvis still be alive today had it not been for Tom Parker? Had he been under someone else’s guidance, would he have been even more successful, wealthier, healthier, happier? Elvis had a great start at life with two Christian parents who loved him. He had immense talent, charisma, beauty, and an innate sense of goodness. With the proper management, who knows.

When I left the theater I was surprised at my varying emotions, ranging from sadness and regret, to an almost maternal feeling towards Elvis. I woke the next morning with more of the same, thinking and re-thinking everything I’d ever believed about the way Elvis lived–and worse, the tragic way he died.

Overall, Luhrmann was able to present a subject that everyone on Planet Earth thinks they already know everything about and then shook things up as thoroughly as Elvis did in the 1950’s. That, to me, is the mark of a great film and filmmaker.