Without the sacrifices made to preserve freedom, there could be no independence. And without independence, those sacrifices have no meaning. And so Israel remembers its fallen in the Yom HaZikaron, Memorial Day. And then on the next day it remembers their achievement, a free and independent nation in Yom HaAtzmaut, Independence Day. 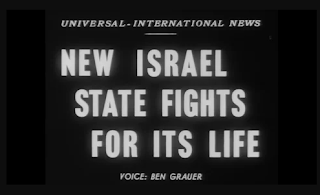 A day after Israel’s declaration of independence on May 14, 1948, it was fighting for its survival against local Islamist militias, including the Mufti of Jerusalem’s, Jaysh al-Jihad al-Muqaddas, along with the armies of 7 Arab nations, Saudi Arabia, Iraq, Lebanon, Jordan, Egypt, Syria and Yemen. On the Muslim side was the Arab Legion, at the time considered to be the best army in the region, under the British General Glubb, whose son would later convert to Islam, and become involved with terrorist groups.

On the Israeli side were frontier units that had evolved not that long ago from orchard guards, ex-WW2 US and UK soldiers, refugees just off the boat who had been given a rifle to hold, with or without ammunition and small groups of farmers holding out as best they could.

One such small group of farmers in the Battle of Gesher, held out against several battalions of the Iraqi army, under the Crown Prince of Iraq, Abd Al Illah (Slave of Allah).

But today while the sirens sound in the cities of Israel, the electronic wail for the voiceless dead– the corridors of power under Biden are filled with a relentless scurrying and plotting on how to best convince or compel Israel to surrender its independence and carve it up into pieces small enough for its old enemies to be able to swallow up whole.

Today Jerusalem is under siege for a third time. Not by armies with guns in hand, but by politicians bent on forcing appeasement. The invaders no longer come in uniforms. They come wearing suits and ties, bearing diplomatic papers in hand. The new siege of Jerusalem is a diplomatic siege by men who have never fired guns, but who would rob the sacrifice of those who stood watch against the night.

And the conclusion that must be drawn from this third siege is that Israel is neither independent nor free until it can dispatch them home empty handed by putting its people first and putting the diplomats who slip money to left wing groups to agitate against Israel at home on the first flight home.

Israel has withstood sieges of arms. It has paid for it dearly, but it has survived and thrived. But Israel is succumbing to the siege of diplomats, because it is neither independent, nor free. And that is because it has stood up to its enemies in battle, but it has never been able to shake off that inferiority complex that manifests itself in seeking their approval, in believing that the moral high ground comes in making concessions to those who would kill you, rather than in protecting your own citizens against them.

Today Israel has the region’s best soldiers and the worst diplomats, who go from door to door, apologizing for their country and trying to defend it halfheartedly against the worst of charges. Meanwhile their enemies, who murder their own children for honor, build cities with slave labor and openly declare that they will destroy every non-Muslim country in the world, laugh at their hasbara.

Israel has never been allowed to stop fighting. The question is whether it is fighting for its survival or its independence.

Israel has spent the last several decades fighting for its survival, and the country is weary of it. Because the difference between fighting for survival and fighting for independence, is the same as a man swimming to cross the channel, and another man trying to stay afloat in open water. The difference is purpose. The amateur men and even women, fighting in 1948, understood what they were fighting for. They were fighting for their freedom. The average Israeli soldier today sees himself as something akin to a police officer, walking a fine line between not getting shot, and not doing something to a potential terrorist that will result in an international incident.

The IDF soldier swears an oath to protect his homeland, but what land is that. It is not Gaza anymore. Is it Judea and Samaria on the West Bank, and if so which parts of it? Is it Jerusalem or only half of Jerusalem. Is his home part of that homeland he is defending, or will a new government decide that he is actually a settler, and under international pressure, decide to demolish his home and drive out his family, even after he has died a hero’s death? He does not know what his land is, because his land is now whatever the international community will decide it is.

His duty is to avoid being involved in a shooting incident will be result in an outcry against Israel. To stand guard, without offending anyone. To fight for land that his government has already sold out from under him. When the Israeli soldier fights, he must know what he is fighting for. Not survival. Not a chance for the diplomats to sit around the negotiating table again, and take apart the map of Israel like spiteful children playing with a puzzle– but for independence. His country’s and his own.

The graves of the dead open on Memorial Day, and those who died peer out, to know if their sacrifice was of any worth. In Jerusalem and beyond, in unmarked graves, buried among the rubble, lost in the land of the enemy.

Once, the Prophet Ezekiel stood in the valley of dry bones, and G-d asked him, “Son of man, can these bones live”. In 1948 the House of Israel was a house of dry bones. Starving concentration camp survivors, children hiding in forests with haunted eyes, a handful of militia playing soldier with used Czech rifles. Jews living as degraded and oppressed servants in a dozen Muslim nations. Turning the dung of camels into fuel. Knowing that they had no rights, but the right to bow to their Muslim betters.

“Then He said unto me, ‘Son of man, these bones are the whole house of Israel; behold, they say: Our bones are dried up, and our hope is lost; we are clean cut off. Therefore prophesy, and say unto them: Thus saith the Lord G-d: Behold, I will open your graves, and cause you to come up out of your graves, O My people; and I will bring you into the land of Israel.'” (Ezekiel 37)

And so He did. They came on boats through the British blockade. Men with stick thin arms marked with permanent numbers took up rifles. Dry bones that somehow stood and fought. Men who had been compelled to walk behind Muslims, to bow to Muslims, to defer to them– took up arms and fought back against them. And they lived. Even those who died, lived. And will live forever.

What is the difference between dry bones and the living. It is spirit. Without spirit, a man may walk and talk, but he is already dead. The State of Israel today has tanks and submarines, jet planes and nuclear reactors. But its spirit is being leeched away and its people are again oppressed. Once more their old masters rule over them. For Israel to live again, it must secure a true and lasting independence. It must fight for it. It must give up the idea that anyone but its own people and its own G-d may sit in judgment over it or dictate its borders. For only through independence, can Israel ever be free.