Sen. Brian Benjamin wanted to defund the NYPD, but he should have fought to defund the FBI because it was the feds that busted the “progressive politician” on bribery charges.

“Last year we made historic strides towards ending mass incarceration with major reforms,” Sen. Benjamin had boasted when he was in the legislature. “But there is still more work to do.” 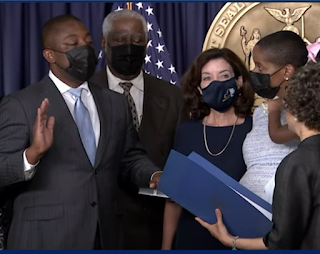 While the leftist crook has claimed that there is a school-to-prison pipeline, the real pipeline is the politics-to-prison pipeline in Albany. Governor Spitzer was forced out in a prostitution scandal, his Lt. Governor, David Paterson, was pushed to the door in a sex scandal, and his successor, Andrew Cuomo, well you may have heard that story.

No sooner did Cuomo’s Lt. Gov, Kathy Hochul step into his shoes, then she decided to pick Benjamin, a prog with impeccable police-hating credentials to stay on the right side of the Left.

Now, Hochul, who courted the pro-crime vote, is stuck with a criminal on her ticket.

“I’m going to name someone that I believe the state will be familiar with and very proud of,” Hochul had said, announcing Benjamin as her pick for her old job after Cuomo stepped down.

There’s a lot to be proud of. Benjamin has set a new state record of being on the job for only 8 months before having to resign to, in his own words, “focus his energies on explaining in court why his actions were laudable– not criminal.”

Also, like Cuomo, Spitzer and Weiner, Benjamin “looks forward to when this case is finished so he can rededicate himself to public service.”

At the rate New York Dems are going, his replacement will have also been indicted by then freeing up a spot for Benjamin to just go right back to his old job of helping criminals.

Asked by reporters now about Benjamin’s arrest, Hochul piously scolded, “Let’s focus on the fact that there are people in a hospital right now fighting for their lives.”

And some of those people were even shot because of her opposition to bringing back bail.

You can understand why Hochul and the Dem Albany establishment oppose bringing back bail for criminals or enforcing the law. The only people who support criminals… are criminals.

The New York Dem campaign slogan might as well be, “Vote for Us, Until We’re Indicted.”

Cuomo began his career as Attorney General of New York. His predecessor was Eliot Spitzer, his successor, Eric Schneiderman wasforced to resign after multiple women accused him of choking and assaulting them. And that’s without delving into the conflicts of interest.

And now Hochul will be forced to run for the top spot with Benjamin’s name right after hers.

“I have utmost confidence in my lieutenant governor,” Gov. Hochul told reporters on Thursday.

On Tuesday, her confidence may have waned after Benjamin turned himself in to face justice.

Why did Hochul pick Benjamin? Let’s look at his credentials. In his failed bid for State Comptroller, the Harlem politician ran on a platform of defunding the police.

“I support the movement to defund the police,” he had declared. After a wave of shootings, the indicted pol falsely claimed that, “more police don’t lead to more community safety”.

Benjamin’s anti-police crusade was backed by former Women’s March leader Tamika Mallory who claimed that, “Brian has already been an important leader in the Black Lives Matter movement.”

The politician in turn presented an official state proclamation honoring the Farrakhan supporter while hailing Mallory as a “freedom fighter like the ones we read about in the history books”.

When Benjamin helped to bring a Black Lives Matter mural to Harlem, Al Sharpton was there. He was endorsed by Calvin Butts and the rest of the race-baiting royalty at the heart of city politics. By embracing him, Hochul hoped to get the support of Sharpton and the gang.

But it’s not as if the charges could have possibly come as a surprise to anyone with a pulse.

There have been lawsuits, ethics charges, and allegations around him ever since Benjamin won a 4% turnout election that took him to the State Senate and then an appointment as Lt. Gov, a position he was as qualified to hold as Hochul, his former boss, or a small ball of earwax.

Many of those scandals involved Benjamin’s relationship with Harlem real estate developers and finance people whom he berated in press releases, but cozied up to and profited from.

“I want to thank the entire village of Harlem who helped create this young man who’s going to help us lead the state into better days and prosperity,” Hochul said when picking Benjamin.

Harlem hasn’t been a village since the 17th century.

And the last Harlem politician to become Lt. Governor was David Paterson who had boasted, “The only way I’m not going to be governor next year is at the ballot box and the only way I’ll be leaving office before is in a box” before he had to leave office anyway. Unboxed.

Now Benjamin has made everyone proud by, among other things, accepting a $250 campaign donation from a 2-year-old. It may take a village to raise a child, but it takes a child to write a $250 check to the progressive enabler of criminals who is now allegedly a criminal.

And the pro-crime movement once again loses one of its own to crime on the perpetrating end.

That’s nothing new for New York politicians who couldn’t be left alone in a room with a locked safe or a baby with a lollipop without making off with the safe’s contents and the lollipop.

But as New Yorkers wrestle with an unprecedented crime wave brought on by the dismantling of the criminal justice system by police defunders like Benjamin who worked to eliminate bail, shut down prisons, and set criminals loose, this case is a reminder of why they love criminals.

The Black Lives Matter movement and the Left are thick as thieves because they are thieves.

Fighting for the rights of criminals was never really about race, it was about the entitlement of the sorts of people who lie, steal, and kill their way to the top and then want to help their own.

In the wake of escalating violent attacks due to Democrat pro-crime policies, like eliminating bail, Hochul and Benjamin co-wrote an op-ed titled, “Don’t Blame Bail Reform; Do Improve It”.

Since Benjamin’s arrest, there has been no word on bail for the police defunder.

Greenfield: The Identity Politiziation of the Supreme Court