It has been over 150 years since our nation’s last civil war. Time enough has passed that we have come to associate the holiday once known as Decoration Day with the graves of soldiers fallen on other continents far from home. 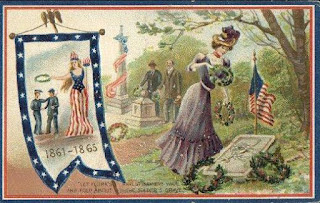 It is important to honor our wartime dead. But Memorial Day has a powerful meaning that we have forgotten. It was the holiday that reunited our country after the Civil War. It began when Americans, from the North and the South, entered the cold gray stone fields of the dead, and decorated the graves of the fallen from the Grand Army of the Republic and the Confederacy with freshly cut flowers.

They followed no presidential order. They acted under no regulation. Instead the mothers and wives of men who would return home no more brought flowers to the graves of their fallen sons and husbands, and to the resting places of the young American men who might have slain them, who had been the enemy, but who still deserved honor and respect.

Those women, of the North and the South, brought America together.

Today a new breed of leftists gleefully tears down Confederate memorials. And it will not end with flags and statues. They will not be satisfied until the cemeteries that were once decorated have been desecrated. It is ominously fitting that the event which marked the end of one civil war now arrives to foreshadow the beginning of another war between brothers.

On a Memorial Day long ago, President Theodore Roosevelt praised the Union soldiers who “left us the right of brotherhood with the men in gray, who with such courage, and such devotion for what they deemed the right, fought against you.”

The Right of Brotherhood is what binds a nation. It cannot be imposed by force even when a war is won. It can only be won through mutual respect. Out of the brutality of the Civil War, came respect for the courage of those who fought and died on both sides. And once more, we called each other brothers.

“They not only reunited States, they reunited the spirits of men. That is their unique achievement, unexampled anywhere else in the annals of mankind,” President Wilson said in his Memorial Day address.

Like the American Revolution, the aftermath of the Civil War was indeed a unique achievement. It is now vanishing before our eyes. And Memorial Day has become a sad reminder of its diminution.

A day once marked by mutual respect for the courage of former enemies is now being ushered in with the deliberate desecration of Civil War memorials in New Orleans. And beyond this ugliness, Memorial Day sharply divides the country between conservatives who believe this country is worth fighting for and leftists who see it as a racist colonial monstrosity that must be erased with open borders and terror.

While there are no armies of the Blue and the Gray exchanging fire on grassy hills, earlier this month cities across America remembered the courageous men and women in blue murdered by the racist supremacist and separatists of Black Lives Matter who deny that the lives of other races matter.

The left-wing tactics of racist terror are a deliberate effort to divide us.

Millions of Americans on both sides recognize that a conflict is underway. Many of them feel helpless to stop it. And they wonder what can be done to avert it.

Certain disagreements are intellectually, culturally and emotionally irreconcilable. The Civil War emerged out of such a conflict. The civil war we are sliding toward now is being born out of another. But mutual respect can make coexistence possible even in the face of fundamental divisions. And where there is no such respect, even minor differences become impossible to reconcile except through force.

The left expresses its radicalism as violent contempt. If it wants to understand where Trump came from, it need look no further than the contempt that its political and cultural leaders express for opponents. Its conviction of moral superiority makes it impossible for it to accept President Trump or his voters, and leads it to assault Trump supporters, vandalize memorials, attack the Constitution and openly plot subversion and secession.

Memorial Day arose not only as a way to honor those who fought for our side, but even those of our brethren who fought on the enemy side. Its lesson is that heroism does not occur only on the battlefield, but in the aftermath in which after trying to kill each other, we learn to live together as one people.

The left is convinced of its utter moral superiority and the total moral inferiority of its enemies. Its utopian projects are pursued with ruthless violence and secured with unlimited power. Its enemies exist only to be brutally ground under. Those who are not of the left have no right to exist upon the earth. They are accorded no rights, no freedoms and no respect. Only a choice between slavery and death.

That is why the left wins its victories and then covers the land in blood. Its societies collapse into misery and repression. This was where the American Revolution differed so fundamentally from the French Revolution and the Russian Revolution. We celebrate that difference on the Fourth of July. It is also where the Civil War differed from so many other civil wars not in its battles, but in its aftermath. That is the great moral victory that we remember on Memorial Day. A mutual victory of national reunification.

The Civil War saved the Union. But the mutual respect of Decoration Day preserved it. If the Union is to survive, the Democrats must learn to respect those they have come to consider their enemies. History teaches us that mutual respect can either avert a civil war. Or it must be learned after a civil war.

Greenfield: The Washington Post Was Founded by Confederates. Now it Screams, 'Racism'.