Vail, Colorado concluded its skiing season on May 1 a year after the Denver Post warned that “climate change is shrinking the Colorado ski season”. 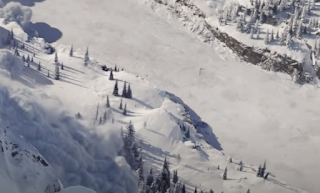 It’s almost as if some higher power has made a point of mocking doomsday predictions by climate pagans who think the weather can be changed by raising taxes and driving Teslas.

But like a Gore-Tex parka, the climate consensus is impermeable to mere snowfall.

A week after Vail Mountain announced that it was extending its skiing season for “the longest continuous season in Vail Mountain history” just after 9 inches of snow fell in early March, a local news station wondered, “With warmer winters, what will happen to the ski industry?”

It may have to extend to June.

In February 2022, Denver broke weather records to hit the coldest temperature in 109 years. At a balmy -7 degrees, the latest outbreak of global warming plunged the city down to a low that had not been seen since 1899.

Still not done mocking Al Gore, March temperatures at Denver International Airport broke a new low with -3. The last time that happened was 1932. Or back before Gore Sr. had even graduated from law school to begin his family’s long slimy political career.

Talk about an inconvenient truth.

Even as activists and resort owners were crying to the media that the entire skiing industry was about to disappear because there would be no more snow, it snowed for the first 9 out of 10 weeks of the year. That was the most starting snow that there had been in 63 years.

“It’s supposed to snow in Denver — but maybe not quite like it has this year,” a local media outlet reluctantly conceded.

This is what happens when the weather makes a mockery of the climate consensus.

The climate must “hate science”.

So what’s a good lefty to do? Ask Facebook and Twitter to deplatform the sky? Fact check the winter? Denounce the disinformation on the slopes? Ask the UN to condemn the snowpack?

Just ignore the facts and continue lobbying to outlaw cars, home heating, and all life on earth.

“A business-as-usual path to a warming planet impacts industries beyond fossil fuels. At this point, there are about as many jobs in coal mining as there are jobs at snow-sports facilities. Coal miners, however, have an outsized influence in US politics,” it grumbled.

O, those mighty coal miners, and the poor oppressed ski resort owners who are furiously lobbying to destroy Appalachia to save Aspen.

The National Ski Areas Association had already demanded a “transition to an equitable clean energy economy” by taxing those filthy carbon emitters. Since all life on earth, except members of the NSAA, emit carbon, that would be bad news for you and me. And our survival.

The industry, which has almost as many minorities as a Burlington Communist Party meeting, also demanded “justice and equity” for “communities of color”.

Auden Schendler, the VP of “Sustainability” at the Aspen Skiing Company and board chair of Protect Our Winters, ranted to the New York Times, “The outdoor industry is bigger, wealthier, crazier and more influential than the N.R.A. We need CEOs and trade groups and leadership to wield that power ruthlessly.”

Protect Our Winters is fighting against domestic drilling so that Americans can pay $6 a gallon for gas. Eliminating car ownership by the poor and the middle class to protect Aspen is a hell of a platform. Almost as compelling as protecting the home values of Oprah and Jerry Seinfeld.

“Home values in mountain towns like Vail and Aspen are some of the highest in the nation, and those values are at risk. By 2050, home values near ski resorts could drop by at least 15 percent due to warmer winters,” CNBC warned during what turned out to be the 5th coldest winter in Colorado’s history.

Ignoring the science of reading thermometers, CNBC instead quoted a worried realtor who sells “multimillion dollar homes in the Vail area” who was deeply concerned about his “livelihood”.

“So we do certainly worry that we wouldn’t be able to sustain one or two or three consecutive years low snow volume due to climate change,” he complained. “And as far as the real estate business that I own and that I also am a broker within, what will happen? You know, where is my livelihood in the future, in three to four, five years?”

That was in 2019. Housing prices in Eagle County, where Vail is located, shot up 54% since 2019. Over February alone, there were $347 million in real estate transactions.

Would that things were as good in coal country as they are on slopes of the rich and famous.

The Left wants to economically destroy some of the poorest parts of the country in Appalachia to protect some of the wealthiest, like Vail and Aspen, from a crisis that isn’t even real.

In 2000, an article in The Independent claimed that “Snowfalls are now just a thing of the past”.

Dr David Viner, a senior research scientist at the climatic research unit of the University of East Anglia, was quoted as saying that in the United Kingdom, “within a few years winter snowfall will become ‘a very rare and exciting event'”.

“Children just aren’t going to know what snow is,” he falsely claimed.

Next time the media hypes an IPCC report about the end of all life on earth, go look at the snow.

Over the next decade, not only did British children still retain the lost knowledge of what snow is, but the UK was hammered with record snowfalls. Eight years later over 3,000 schools had to be closed and much of the country was shut down by the heaviest snowfall in 18 years.

Snow is still very much around, but the article has been removed from The Independent’s site.

In 2018, the isles were hit by the “heaviest snowfall in decades”. The New York Times described “Mediterranean beaches blanketed in white”, “blizzards and ‘life threatening’ conditions in normally snowless areas of Britain”, and dozens of people dead in a “Siberian weather pattern.”

“It was like coming in from a ski resort,” one Briton trying to get to London described.

But two years later, the BBC and the Met Office falsely claimed that “snow will virtually disappear for much of the UK by the end of the century because of climate change.”

The Met Office’s Lizzie Kendon told the BBC that, “We’re saying by the end of the century much of the lying snow will have disappeared entirely.”

It’s not the snow that’s lying.

But like any good doomsayers and conspiracy theorists, the warmunists have learned to postpone the apocalypse to a distant future when everyone will be dead.

Meanwhile springtime in London was interrupted by a March snowstorm.

And in April, Denver recorded the coldest temperature since 1953, of only 10 degrees.