“I had to make sure Africa was prepared,” Deborah Birx declared as the pandemic spread across China and threatened America.

“Whenever I’ve heard of a new pathogen emerging, my first thought has been the risk to Africans,” she explains in her new memoir. “In the United States, we have many different layers of public health protection… Africa, though… is in a fundamentally different position.” 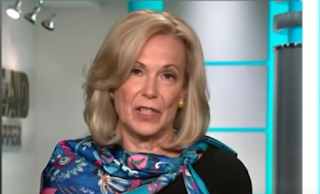 Formerly tasked with fighting HIV in Africa, Birx was far more interested in the countries who weren’t paying her salary than in the nation that was. Even while “tracking, observing, and calculating the possible dimensions of the novel coronavirus outbreak in China”, she was focused on an “annual meeting to evaluate the progress in all the African programs we support” and how to spend the “more than six billion dollars in U.S. taxpayer money.”

Africa continues to enjoy a fairly low pandemic death rate. An estimated 65% of Africans have been infected, but fairly few died of the disease. It probably helps that the median age in Africa is 19, while in America and China it’s 38, and in Europe it’s 42. There are only 27 million people over the age of 70 in an African continent of over a billion people.

There are twice as many seniors in America. Africa didn’t need Birx’s help, America did.

Birx’s memoir is as useless and unnecessary as the White House Coronavirus Response Coordinator. It is a record of her uselessness and of the vast armies of useless, corrupt and destructive managers of our decline who have spent their careers in and out of government.

Debbie Birx, with her fluttery hand gestures and luxury fashions, left us even before the virus did. The flattering media coverage of her memoir conveniently ignores just why it is she left.

Before Thanksgiving 2020, Birx warned Americans to limit celebrations to “your immediate household.”

“We know people may have made mistakes over the Thanksgiving time period,” the scarf-wearing public health fashionista scolded the country. “If you’re young and you gathered, you need to be tested about five to 10 days later. But you need to assume that you’re infected and not go near your grandparents and aunts and others without a mask.”

After Thanksgiving weekend, Birx flew out to a vacation home in Delaware accompanied by family members from two different households. A few days after the story broke, the longtime Fauci associate announced that she would be retiring from her position because of “what was done in the last week to my family.”

Nothing was said about what she and Fauci had done to America’s families. Nor was there any acknowledgement that Birx had just been scolding Americans for getting together with elderly family members who had been depressed and socially isolated. But it’s different when “they” do it.

And now Birx is back and like all shameless hacks, she’s peddling a memoir no one needs.

For only $29.00, you too can pick up a copy of “Silent Invasion: The Untold Story of the Trump Administration, Covid-19, and Preventing the Next Pandemic Before It’s Too Late.”

In the memoir, Birx claims that when she was offered the White House COVID coordinator position, she initially refused because “I’d never sought out the media, and I didn’t need or want to be out front. I prefer doing things rather than talking about doing them.”

Now Birx is seeking out the media and putting her face out front to talk about herself. Not about her current work, as chief science advisor for the current incarnation of Electrolux in its bid to sell air cleaners, but about her unpopular White House tenure during the worst of the pandemic.

It’s hard to think of a book more poorly timed than this one. Even as the COVID health security state is being dismantled, one of its more irritating promoters wants you to listen to her one more time. But, at least this time you get to decide if you’re paying for the privilege.

“In the book, I expose the true cost of mistakes that were made at all levels of the federal government,” Birx claims. Just not the ones involving Fauci.

“This is not a book about Donald Trump alone,” she assures readers in her preface, but he’s there in the subtitle and always on the tip of her tongue during her latest batch of media hits.

Mostly though it’s a book about the awesomeness of being Debbie Birx.

“My back is against the wall. Literally,” is how she begins the description of her first meeting with President Trump. Like most of her book and her career, it amounts to nothing. It’s hard to think of another crisis memoir by a government official in which copious amounts of space are dedicated to what they read and watched online. Or how little of a clue they had about it.

“Silent Invasion”, which sounds like the title of a dollar store Tom Clancy knockoff, comes complete with chapters like “Scott Atlas Shrugs” and “You Can’t Quit”. Written or ghostwritten in a cheesy novelistic style, it’s one of those memoirs that asks you to believe that its author can reproduce conversations and background details years later. But what it can’t do is tell us anything we didn’t already know, or justify its existence along with Birx’s pandemic tenure.

Birx’s memoir encapsulates her career in a recitation of woke pieties. We learn that she was dedicated to fighting “structural issues of inequality” and access for “the LGBTQ community”. But what is missing is any trace of insight into pandemic policies beyond the ritual wokeness or the vapid dramatization of an uninteresting career that reads like bad West Wing fanfic.

“Silent Invasion” could easily have been written a year or two ago. There’s little about it to suggest that Birx has learned much of anything. It’s filled with defensive self-righteousness, but so little self-awareness that it’s almost baffling that any human being could have written it.

“I thrive on being around like-minded individuals,” she declares without a hint of irony.

That much is undeniably true.

Birx’s memoir is full of tributes to Fauci, to the CDC’s Robert R. Redfield, and to other familiar players. It’s a view of the disaster from the perspective of organization men and women and all it has to offer is a blinkered recital of pointless procedures and high-level office politics.

Much like Czar Nicholas II spent some of his last diary entries recording the weather, Birx writes around what matters. There’s nothing here that a regular CNN viewer doesn’t already know. And that’s the point. While Birx wants the image of a courageous medical warrior speaking truth to those who did not want to listen, she was just another cog in the government machine.

“Silent Invasion” badly wants to be the memoir of a visionary warning of a crisis, but instead it’s the story of a Titanic officer explaining why the deck chairs really needed to be rearranged.