The University of Florida has announced that it’s kicking Karl Marx off campus.

“Given current events in Ukraine and elsewhere in the world, we determined it was appropriate to remove the name of Karl Marx that was placed on a group study room at the University of Florida,” a University of Florida flack told the conservative organization Campus Reform.

Marx’s name had apparently decorated a room at a public university for the last 8 years.

The Ukrainians probably have no position on a Marx study room, but Florida is filled with refugees from Marxist countries. Why should Cuban refugees have to fund a Karl Marx room? 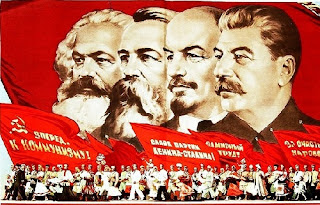 Banning Marx from campus makes more sense than pulling Dostoevsky from college curriculums or canceling Tchaikovsky concerts. Dostoevsky and Tchaikovsky have nothing to do with the war, but the invasion was ordered by a former KGB officer who, like virtually every Soviet student, was obligated to write papers on Marxism-Leninism, and by a military built up to fight a global campaign to spread Marxism-Leninism around the world. Including into Ukraine.

But canceling Marx over a war in 2022 is the perfect embodiment of postmodern shallowness.

The Young Democratic Socialists of America, the pro-Bernie and AOC-linked campus group, put up a petition demanding, without a trace of irony, “Free Karl Marx.”

Considering the number of political prisoners still locked up in Marxist prisons in Latin America, especially in Venezuela, “Free Marx’s Prisoners” might have been a more decent slogan.

“The current Russian imperialist state is run by capitalist oligarchs who hold no affinity for the Marxist slogan: ‘From each according to his ability, to each according to his needs’” the YDSA petition complains. Then again the Soviet Union was an oligarchy which used the slogan, but whose elites lived in dachas while peasants starved. Marx, who never worked a day in his life, lived through the sweat and toil of the factory workers of the Engels family.

In its bid to prove that Russia isn’t Marxist, the YDSA proved that Marx was un-Marxist. And if Marx isn’t a true Marxist, who is?

The YDSA claimed that, “The removal of the Karl Marx group study room is not only historically illiterate but insulting to UF students who have been fighting for years to change the name of buildings glorifying racists and homophobes.”

Bad news, Karl Marx was extremely racist (as well as antisemitic, but that would just make the DSAers, who hate Jews even more than free enteprise, love him all the more.)

But sometimes Marx would combine them both, like referring to one of his many rivals as a “Jew N___r” following that up with, “It is now quite plain to me — as the shape of his head and the way his hair grows also testify — that he is descended from the negroes who accompanied Moses’ flight from Egypt (unless his mother or paternal grandmother interbred with a n—– ).”

And to think Marx’s statues are one of the few left standing even as lefties have been toppling George Washington, Abraham Lincoln, and Theodore Roosevelt.

Marx, of course, accepted the basic premises of eugenics, and his insane ravings include the popular 19th century idea that the character of nations could be explained by their racial origins. Tie that in with the idiotic racial phrenology in the above paragraph and you know more about what made Marx tick than the average Marxist who reads him, but doesn’t understand him.

What would Marx have made of the war between Russia and Ukraine? Despite Russia’s embrace of Marxism, its progenitor despised Russians (and all non-Germans), considering them subhuman Mongols. And the Ukranians? Marx believed that they should be part of Poland.

Overall though Marx, like the Nazis, believed that anything east of Germany was populated by barbarians who needed to be turned over to an empire who would enslave or exterminate them. This was not an unusual idea which is why the Nazi program met with so little opposition.

Putin’s assertion that Ukraine never existed is grounded in the writings of Karl Marx who routinely denied that the small independent nations east of Germany had any right to exist.

There’s little doubt that Karl Marx would be on Russia’s side in this war. But he would also hold out hope that Germany would sweep in and conquer all of the subhuman “barbarian” races.

If the YDSA doesn’t want the names of racists on campus, it may want to start with Marx.

But focusing on Marx’s bigotry is the silly fetish of a 21st century campus political purity culture. Most people throughout human history were bigots of one kind or another. The problem with Marx wasn’t that he held fairly typical racial views for 19th century leftist elites, including most Democrats, it’s that he popularized a radical ideology that called for tyranny, mass murder, and war. The common denominator in Marx’s hateful ravings is his egomania and disdain for human life. The father of Marxism wasn’t motivated by human compassion. His advocacy for the working class was composed of ideological abstractions that justified his megalomania.

The YDSA, Bernie Sanders, AOC, and much of the socialist movement are the inheritors of Marxian logic in which abstract outrage justifies egotistical tirades and ruthless power grabs.

That is the source of Marx’s appeal and it lodges everywhere including critical race theory.

The motto of the University of Florida is “Civium in moribus rei publicae salus” or “The welfare of the state depends upon the morals of its citizens”. The motto isn’t an unusual one for public universities. Its message is that using taxpayer funds to maintain bodies of higher education is justified because they strengthen the civic body by building the moral fiber of its citizenry.

Does having a Karl Marx room strengthen or weaken the body of the state of Florida?

Is there one country that has been improved by Marxism? Has any portion of the world become more peaceful and more stable due to hearty infusions of Marxism?

As badly as Russia and Ukraine may be doing now, they’re still better off without Marxism. And, decades after the fall of the Soviet Union, that can be a little too easy to forget. Both countries are fighting over wealth that simply didn’t exist under Communism while enjoying a standard of living that actually makes sanctions on Russia over what used to be luxury goods bite.

Russia and Ukraine are better off without Marxism. So is the University of Florida.

Alex Newman: How the Deep State is Exploiting the Russia-Ukraine War