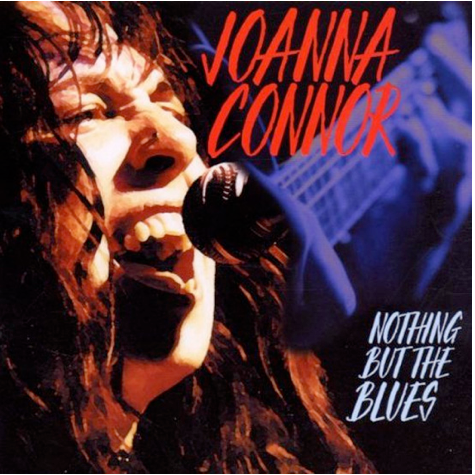 Another point of fascination for me is the combination of rocking rhythms and bent strings. From Sister Rosetta Tharpe on, that tradition continues. Women have been playing great Blues and Rock guitar for decades. However, the extent of that expertise is just beginning to be truly appreciated by the general public.

One of the best Blues and Rock guitar players out here currently is Joanna Connor. I first became aware
of Joanna Connor in 1985 when she was the after festival entertainment for the first Elizabeth River
Blues Festival in Norfolk, Virginia. She knocked me out as a player and singer at that first show. It was at
the legendary Kings Head Inn in Norfolk, VA. She played with great passion and dynamics on her Gibson
Les Paul guitar. Joanna sang that night, and continues to sing, with a no holds barred passion.

An interesting memory: At this same venue, I had seen a few years earlier another great Blues-Rock
player who had a great impact on Joanna and so many others: That was Stevie Ray Vaughan, Summer of
1981.

Kings Head Inn was a great place to see shows throughout my youth. It was one of several venues that
were framed by Old Dominion University in Norfolk, VA. Sadly, Kings Head and all those clubs are now
gone, but the memories linger.

In 1990, just a few weeks after Stevie Ray Vaughn’s untimely death, Joanna was a featured act at the
Elizabeth River Blues festival for that year. For this festival appearance, Joanna was playing a Fender
Stratocaster. For the initiated, a Les Paul and a Stratocaster are two vastly different guitars. Yet, Joanna
Connor has demonstrated a equal facility with both types of guitars. No matter the guitar, Joanna
Connor sounds like herself. At this 1990 appearance she played material from her, at that time, recently
released debut album on the Blind Pig Label; “Believe It!”

Almost 32 years later, two distinct memories remain from her set that day. The opening instrumental
was associated in the past with the Allman Brothers, “Don’t Want You No More.” Joanna recalled with
her playing the best Duane Allman had to offer with her own touch applied. I got the same chicken skin
bumps later on in the set with her rendition of Texas Blues Player, Freddie King’s “Pack It Up.” She easily
recalled the best Freddie King had to offer and more. An important side note: Freddie King remains a
huge presence in the history of Blues guitar.

After the concert, we connected with Joanna and her bass player of that time. Joanna and company
came over to Portsmouth, Virginia where we relaxed and hung out at the home of my bass player of the
time, the late Jeff Clites. We listened to some of his vast collection of Blues. A great evening. Burned into
my memory.

I came to a delightful realization this second time that I saw her: here Joanna was paying tribute to the
recently deceased Stevie Ray Vaughan at that concert. Yet, to my ears, Joanna was the absolute equal of
folks like Stevie and Johnny Winter. Like Vaughan and Winter, passionate vocals and incendiary guitar
work were major parts of the total package that is Joanna Connor.

Joanna Connor was born in Brooklyn, New York, but was raised in Worcester, Massachusetts. As a child,
Blues was part of her steady listening diet. Blues-Roots musician Taj Mahal was an early favorite. That
was, in part, because Joanna’s Mother had an impeccable sense of musical taste. She passed that
appreciation on to her daughter. In a recent phone interview with this writer, Joanna stated the
following about her Mother: “My Mother was just a hip music lover. I had the benefit of having that in
my life.”

Seeing Chicago Bluesman Buddy Guy at the age of 10 was a Road to Damascus moment for Joanna.
Throughout her High School years she mainly sang, but she was playing guitar and saxophone. By the
age of 17, Joanna Connor was performing professionally. Her increasing passion for the Blues guitar led
her to move to Chicago in 1984.

The Payton band got a House Band job at Buddy Guy’s Club, at that time known as The Checkerboard
Lounge. This gig was like a Master’s Class in Blues for Joanna. During her tenure with the Payton Band,
Joanna got to play with Blues legends such as Junior Wells, Hubert Sumlin, Otis Rush, Pinetop Perkins,
Lonnie Brooks, Koko Taylor, among many. In essence, this gig was like a “boot camp” in the learning of
every aspect of playing traditional Blues and backing traditional Blues artists.

In 1988 Joanna started her own band, playing frequently at the Chicago club, The Kingston Mines. Not
long after, her impeccable guitar playing and soulful singing caught the attention of the folks at
Blind Pig Records. She signed with them. During this period she also did some recordings with the Ruf
Records label. Of particular note is the album “Rock and Roll Gypsy,” released on Ruf. From 1989 until
2002 Joanna recorded for mainly these two independent labels. In 2002 she signed with the
Independent label, M.C Records.

Currently, Joanna newest record, 4801 South Indiana Ave, was released in February 2021 on Joe
Bonamassa’s Independent label, Keeping the Blues Alive. A superlative record. We will will discuss why
that album, among others, is special. But I first want to discuss why Joanna Connor is special and why
her music belongs in your collection.

First, the thing I like most about the music of Joanna Connor is that it is not just performed inside a
traditional Blues box. As she described in our conversation, “I play the Blues. I play real traditional Blues
backing people up. But I knew I wouldn’t be true to myself if I just put myself in a box.”

But there is plenty of Blues in the bent strings of Joanna Connor’s guitar playing. Her guitar work
references masters like Freddie King, Otis Rush, Albert King, and Buddy Guy, among others. The edgy
Blues of artists like the aforementioned are reflected in Joanna’s guitar work. But the Blues is not the
only music in her interpretive and creative arsenal.

Going back over her entire discography in preparation for this article, I found myself swaying back and
forth in my chair. The arrangements and the backing for all her songs are in-the-pocket. She is not afraid
to tackle Ballad, Country or Funk forms either. All the material that Joanna records or performs have an artful and consistent believability about them.

As well as being a gripping lead guitar player, Joanna is also a great slide guitarist. Her technique on slide
guitar places her delightfully between Little Feat’s Lowell George, and Texas Bluesman Johnny Winter.
Regrettably, many great Blues guitar players are merely great guitarists and not singers. Not Joanna. She is a great singer, with great diction, intensity, sung with a soulful and believable delivery. Whether a Ballad, a Blues or a Rocker, her voice always fits the song to my experienced ears.

Joanna Connor’s most recent two records demonstrate an artist whose creative powers are truly
peaking. I am very fond of the 2019 album “Rise”, on M.C Records. This album is well arranged with
genres covered such as Slide and Swing Guitar Blues, hip hop beats and a heartbreaking solo version of
the classic ballad, “Since I Fell For You.” On this track Joanna records two acoustic guitar parts that
demonstrate what a stunningly apt guitar player she is.

As previously mentioned, Joanna’s most recent album is Joe Bonamassa produced “4801 South Indiana
Avenue,” (2021, Keeping the Blues Alive label AKA KTBA). Their collaboration happened because Joe
had retweeted one of Joanna’s videos on his Twitter account. Joanna thanked him and gave him her
contact info.

Joe Bonamassa immediately contacted Joanna and offered to produce her next album. Joanna asked Joe,
“Of all of the guitar players in the world, why me?” Joe responded, “Because you have an intensity
about your playing that most people don’t have. As a matter of fact, I wish I had some of that in
myself where you just let it go and you don’t even think about it.”

“4801 South Indiana Avenue,” is a treasure trove of classic guitar tones. Steve Ray Vaughan
Keyboardist, Reese Wynans, is a strong presence throughout the album. In addition on the opening
track, “Destination,” Joanna is joined by Southern Soul Vocalist, Jimmy Hall. Joanna felt that she was
pushed harder than she had ever been pushed.

Joe Bonamassa opened for Joanna at the House of Blues many years ago. He is determined to remove the word “unknown” from the description of Joanna Connor. And just as Bonamassa was impressed with some of Joanna’s YouTube videos, so was Hollywood. In 2019, Film Director Adrian Lyne was looking for a Blues Band for his upcoming film, “Deep Water.” Director Lyne saw a YouTube video of Joanna covering Robert Johnson’s “Walking Blues.” Lyne knew he had found the band he was looking for for. Before the pandemic, he flew the band down to New Orleans and filmed Joanna performing live.

“Deep Water,” starring Ben Affleck, has recently been released on Hulu in the United
State, and Amazon Prime Video (Internationally).

As a long time Joanna Connor fan, I am hoping that the 4801 album and Deep Water film will push her
into the spotlight she so richly deserves. She has the goods. She is a great Singer, Guitarist, Writer and
Performer. In 2022, and beyond, it is time for the world to notice Joanna Connor.