Uranium prices have shot up by as much as 40% since Russia’s invasion of Ukraine.

With nuclear power providing about a fifth of our energy, this is another blow for Americans.

Unfortunately our nuclear power plants are dependent on uranium imports from Russia and countries in its sphere of influence because our domestic mining industry was suppressed. 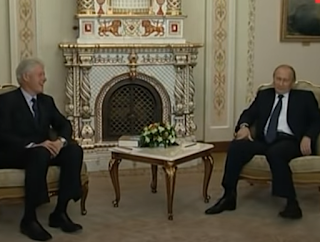 In December 2016, on his way out the door, Barack Obama announced that he was inventing the Bears Ears “National Monument” on over a million acres of land. While California environmentalists celebrated, tens of thousands of locals bitterly protested the move.

Billboards and stickers reading #RescindBearsEars were plastered across Utah towns in the area that expected catastrophic consequences from the destruction of their livelihoods.

Among these was uranium mining.

A uranium mine in the area has the potential to yield 500,000 pounds of uranium. Miners warned that the Bears Ears monument would force us to rely more heavily on foreign uranium.

But the Democrats, still busy blaming their election defeat on some sort of phantom Russian-Trump conspiracy, did not see any problem with making America dependent on Russia.

The Trump administration did not rescind Obama’s power grab, but did shrink the monument by over 80%. It was the latest battle in a long running war between Democrats looking to shut down mining in general and uranium mining specifically, and Republicans limiting, but not undoing the damage done by their abusive environmental regulations and power plays.

And with the blessing of the Clintons, America became dependent on foreign resources.

In 1980, the United States had produced over 40 million pounds of uranium, but under the Clinton administration that number stood at less than 5 million. Now it’s well below a million.

Despite efforts by environmentalists to shut down nuclear power plants and leave Americans reliant on expensive and unreliable Chinese solar panels and other scam green investment vehicles for their donor base, our nuclear plants, which unlike wind and solar are capable of delivering a reliable power supply, still went on needing uranium.

Kazatomprom, the world’s largest uranium producer, had partnered with Uranium One, a Canadian uranium mining company that the Clintons colluded to sell to the Russians (more recently, Uranium One was resold to an American company) and has close ties to the nuclear industries in Russia and China. Communist China is pushing aggressively into Kazakhstan to feed its growing appetite for nuclear power. And that will also limit our nuclear power options.

America has plenty of uranium but, like so many other resources, miners aren’t allowed to go and get it. That’s why we depend on China and the Taliban for the rare earths that go into our microchips, on Mexico for copper, and on Russia and its allies for our uranium.

As Bill Clinton went to war against miners, the mayor of Moab, Utah pleaded for respite.

“We called ourselves the uranium capital of the world. It provided us with a high standard of living,” he said. “While we’re proud of the tourism base, it cannot provide the standard of living that mining did. Moab needs the jobs that mining will create. It could come back. We still have plenty of low-grade uranium ore throughout the area. It will never come back if they pass this bill.”

California environmentalists have been smugly lecturing locals in Colorado, Utah, and Wyoming that they ought to forget about having good jobs that can provide them with a middle class life, and just be there to bus their tables and sell them keychains when they go on vacations.

While the Clintons were cheerfully suppressing mining in America, Putin was on the make.

When the Clintons later colluded to allow Uranium One to be sold to Russia, Putin held a meeting with the head of state-owned Rosatom. “Few could have imagined in the past that we would own 20 percent of U.S. reserves,” he told Putin.

When Bill Clinton was paid $500,000 by a Russian investment bank that was promoting Uranium One for delivering a speech, he was personally thanked by Vladimir Putin.

This was only the final betrayal after the Megatons to Megawatts program signed by Bill Clinton which claimed that it would end the threat of nuclear war by taking retired Russian nuclear warheads and turning them into “cheap energy” for American nuclear power plants.

The deal, hailed at the time as a scheme to save the world, actually freed Russia from having to maintain its older nuclear weapons and instead enabled it to invest in next generation weapons, while dumping a great deal of “cheap” uranium that devastated the American mining industry.

At its peak, Russian uranium provided a third of our fuel. Bill Clinton not only went to war against domestic mining, but colluded to enable the Russians to dump cheap uranium here.

The Russians didn’t just “dump” uranium to suppress our domestic mining industry, they did it with the blessing and support of the Clinton administration and some of its corrupt allies.

Once again, the Americans thought that they had put one over the Russians, but it was the Russians who had the last laugh as we paid them to upgrade their nuclear weapons while becoming dependent on Russian uranium. As the saying occasionally attributed to Lenin goes,

“The capitalists will sell us the rope with which we will hang them.”

Megatons to Megawatts wrapped up during the Obama administration. In 2018, Putin unveiled a new generation of nuclear weapons. Experts now worry that they may be used in Ukraine. And America has become dependent on uranium from Russia and from former Soviet republics.

We could revive our domestic uranium mining industry, but to do that we would have to dismantle the entire system of government and environmentalist lawfare that has been steadily destroying our domestic industries, including mining, under the guise of saving the planet.

The Left claims to want to stop Putin even while making America and Europe dependent on him. Putin wants to leverage control over energy supply chains. If Democrats really want to stop him, then they need to throw out the corrupt Clinton policies, and start drilling and mining again.