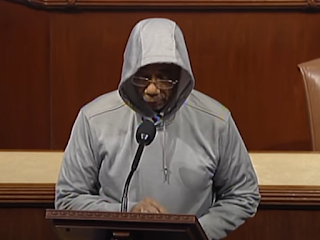 Even while leftists wished that Justice Clarence Thomas, the court’s lone black justice, would die after reports that he was hospitalized, they cheered the incredible breakthrough of the first black female, and more importantly leftist, being nominated for a seat on the Supreme Court.

The long contentious hearings had plenty of awkward moments, but the most definitive clash came from a simple question that highlighted the vast moral gap between identity politics and natural rights.

“When does equal protection of the laws attach to a human being?” Senator Kennedy asked Jackson.

“Well Senator, um… I believe that the Supreme Court… um… actually I, I actually don’t know the answer to that question — I’m sorry — I don’t,” she awkwardly replied.

The postmodern leftist notion of human rights revolves around pursuing equity for discriminated groups. Leftists like Jackson have thorough notions about what equal protection looks like for black or transgender people, but no notion of a grander principle that protects all human life.

Jackson obviously found the question uncomfortable because it addresses abortion. And yet even a militant abortion supporter like Jackson ought to be able to tackle the basic moral question of when life begins and when human rights come into play. The Framers are often attacked for refusing to grapple with the moral questions of slavery, yet they did. That they narrowly chose not to break up the country over a monstrous evil did not change the fact that they struggled to reconcile their ideals and the compromises they believed they had to make.

Leftists, like the most hard-boiled defenders of slavery, refuse to even admit that there’s an issue. Jackson’s smirking response would have befitted a Buchanan Democrat pretending not to understand that human slavery might have moral, not just economic, legal implications.

Identity politics reduces every issue to victimhood. The same worldview that makes it all too easy to blame highways and obesity on systemic racism makes it equally impossible for leftist jurists like Jackson to even conceive of life and liberty as natural rights bestowed on everyone. And yet it was this conviction that eventually overturned slavery and segregation.

“Do you have a personal belief though about when life begins?” Senator Kennedy asked Ketanji Brown Jackson.

“I have a religious view that I set aside when I am ruling on cases,” she replied.

Judges shouldn’t rule from theology, but the idea that their religious moral convictions should play no role in basic notions of rights is alien to the words of the Declaration of Independence that “all men are created equal, that they are endowed by their Creator with certain unalienable Rights, that among these are Life, Liberty and the pursuit of Happiness”.

If religious views of human rights are things to be set aside, then what is the basis for anyone’s rights? Judicial precedent, a “living constitution” that incorporates current academic doctrines, the pursuit of equity? Those are where leftists derive their moral authority and notions of rights.

And yet without that grand conviction that human equality and rights proceed from a higher power, they remain at the mercy of judges like Jackson who can decide when to take them away. And Jackson is unable to even articulate when those rights actually begin which will make it that much more morally and intellectually easier for her to take them away, from babies and from anyone else whose existence obstructs her political ideology and personal biases.

Jackson can’t comprehend rights except in terms of equity. If a group isn’t sufficiently wealthy, healthy, or otherwise successful, the government has to step in and alter the equation. But if a group is all of the above, then the government needs to examine how it oppressed others.

This Procrustean Bed in which the government stretches some and shrinks others in pursuit of the impossible mission of making everyone equal is the only kind of rights leftists understand. And they have no notion of the origin of rights except as a mindless pursuit of leveling everyone, and an atonement for the social sins that resulted in everyone not being equally successful.

Rather than looking back to an origin point, they look forward to a secular utopian “right side of history”, a transcendentalist conviction that one day we will all be made equal, to justify everything they believe and everything they do. And so you can’t ask Ketanji Brown Jackson when rights begin, because they haven’t ended yet. The present is just an unfinished future.

Rights don’t begin with God or with our founding documents, they run backward in time from some inchoate socialist future which they intend to achieve by forcibly “equalizing” all of us.

Jackson couldn’t process the question of when universal human rights come into being, because she doesn’t view rights as universal except in the sense that everyone has the right to be made equal. To assess whether someone has rights, leftists have to know their race, gender, sexual orientation, socioeconomic background and other details that indicate where they stand on the equity spectrum. Asking them to articulate rights without reference to equity is like asking Thomas Jefferson where rights come from if there was no Creator or guiding natural order.

What rights does a baby have? According to leftists, the right to be made equal. The only real right in leftist judicial doctrine is the right to have what others have. And the amplification of whatever privileges and benefits are necessary to cut in line in order to achieve equity.

But does a baby have the right to live? That simple question whose parameters the Founders and Framers would have had no trouble understanding, frustrates and infuriates leftist jurists to whom rights are not natural, but relative, and not individual, but collective. While they can amply expound on the plight of transgender Navajo Indians, they can’t offer a decision on the life of a single infant of unknown race and sex because they don’t believe in rights apart from identity.

Leftists can’t affirm natural universal rights, only compare rights relative to someone else.

Ask a leftist to compare my rights to your rights and they can easily do it. A baby can’t have innate natural rights, but must have her rights compared to her mother and to society at large. Stakeholders must be consulted, and papers must be reviewed on the status of women in Colonial America to derive who is the greater victim and who is entitled to more rights.

The question of when human rights are conferred is baffling and annoying to Jackson. In her legalistic worldview, the question “when” is almost entirely irrelevant. It’s like asking “when is racism” or “when is sexism”. The dividing lines in leftist jurisprudence are not based on time or other rational metrics, but the subjective and relative ones of who loses and who gains.

That’s why asking for firm rational metrics for anything is routinely derided as white western masculine thinking in academic circles. Leftists prefer to make decisions based on lived experience which is another way of saying anecdotal subjectivity which leaves plenty of room for personal bias, but none for any meaningful guarantee of rights beyond momentary feelings.

The Founders and Framers were certainly flawed, but they proceeded from an understanding of rights that expanded them, while leftists like Jackson can only contract and reduce them. Where our nation’s founders universalized rights, leftists use equity to deuniversalize them, replacing general guarantees of human rights with situational activism through academic lenses.

They claim that they are expanding rights when all they’re doing is taking away our universal natural rights and replacing them with a ranked caste system of identity politics privileges that can bestow a “right” to a house, a car, or fat-free yogurt, but not the absolute right to live.

Where the Bill of Rights could define free speech as a universal right, leftists have dismantled the ACLU and insist that only the people who agree with them should have free speech. And so it goes for everything from the right to assemble to freedom of the press. Conservatives rightly see this as an unconstitutional double standard because it transgresses universal rights. But leftists only see universal rights as a leveling mechanism that only applies to the extent that it makes people more equal, but not when it does not. And so it’s natural for them to reject the idea that their opponents, who they argue make people less equal, should have free speech.

This is the totalitarian logic of civil rights which has slowly taken away rights from everyone.

Cancel culture is the inevitable result of the impulse to make people equal by destroying those who are perceived to stand in the way of the social activism that is the only source of equality.

Is it any wonder that Jackson can’t articulate or even grasp the concept that universal human rights exist and that they have some origin point in the process of human development?

Jackson’s incomprehension of the question reveals the moral bankruptcy of identity politics.

Identity politics is not making us a better society, more concerned with rights, it’s transforming us from a society that believed everyone had rights to a society which has no concept of rights.

Dr. Fred Eichelman: The Value of a Second Opinion

Greenfield: Save "Palestine" From the "Palestinians"