While the Biden administration is focused on protecting the borders of Ukraine from Russia, some 8,600 Russians have shown up at our border with Mexico since last August.

Not to be left too far behind, 5,534 Ukrainians have also arrived since October.

Last December, two cars carrying 18 Russian migrants tried to barrel their way through at the San Ysidro Port of Entry. A CBP officer opened fire on a Mercedes driven by the invaders.

YouTube is full of guides for Russians looking to get into the United States through Mexico. 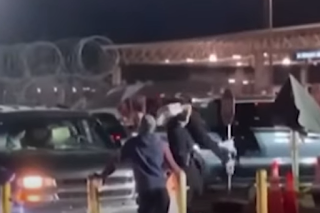 In one video, a man with Asiatic features wearing a Russian Army shirt directs his video to all Russians, describes how he made it to San Diego after a previous failed attempt in which they discussed trying to evade CBP and race to the border crossing, and advises that if you don’t leave Russia with a “commanda”, close friends, relatives, “like in the army”, it won’t work well.

He suggested that in immigration detention around 70% were Russian speakers, “Ukranians, Belarusians, Russians, Kazakhs, Kyrgyz.”

“Make a decision and make a run for it, in a fraction of a second,” he advises. “And it’ll be what will be. Even if they catch you, nothing will happen to you.”

That ought to be the motto of the Biden Administration’s open borders immigration policy.

That’s why there are encampments of Russians and Ukrainians in Mexico demanding asylum.

Did Putin invade Tijuana while no one was looking? If he tried, a heroic resistance of cartel members with machine guns mounted on Toyota pickup trucks would have sent Russian troops, already suffering from dysentry, alcohol poisoning, and six different kinds of STDs, packing.

How exactly did a town worth of Russians and Ukrainians pop up in Mexico? They flew there. And they didn’t do it to buy hundred peso Rolexes made in China but because they know that if they come up with a timely sob story about fleeing the latest crisis, we’ll let them in.

Only four of the Ukrainians who showed up since September were asked to leave.

Every Russian who shows up now claims to hate Putin. But if loving Putin were grounds for asylum, they’d all come dressed in Putin t-shirts. The Ukrainians, regardless of where they live, including one who came from Uganda, claim to be fleeing the Russians. And they’re all fleeing each other to Mexico and demanding that we save them from each other. Right now.

The Trump administration’s Remain in Mexico policy was supposed to stop this kind of migrant tourism under which migrants from every single country in the world would fly to Mexico and show up at the border, demanding asylum.

Asylum from what? Mexican sunsets?

Despite the Biden administration’s open borders plot, state lawsuits and court rulings led the policy to remain in force. Russians and Ukrainians flying halfway around the world to show up at our land border don’t have a credible fear of persecution in Mexico. They’re gaming the system.

“While Moscow to Cancún is the most common route, some Russians fly from Amsterdam or Paris to Mexico City and then go to Tijuana,” an expert relates. Is there a reason these folks can’t apply for asylum in Amsterdam or Paris? Having reached Paris, aren’t they now safe?

Despite Gov. Ron DeSantis suggesting, ‘If (Putin) went into France, do you think they’d do anything to put up a fight? Probably not”, Paris hasn’t actually fallen again. Yet. It’s safe from Putin (albeit not so much from Algerian or Moroccan Jihadists shouting, “Allahu Akbar.”)

The United States does not share a border with either Ukraine or Russia. Despite that we’re being invaded anyway because the one border we aren’t allowed to protect is our own.

If Putin wanted to invade America, all he would have to do is fly his forces into Tijuana International Airport (if we don’t steal your luggage, it’s because your clothes aren’t good enough) and have all 150,000 conscripts apply for political asylum. Two days later they’d all be on buses heading around the country courtesy of the Lutheran Immigration Services, the Conference of Catholic Bishops, HIAS, and the beleaguered American taxpayer.

He wouldn’t even need to bring any tanks. We’ve already surrendered our border and nation.

The AP informs us that one Russian “narrated his trip from Moscow’s Red Square to a San Diego hotel room, with layovers in Cancún and Mexico City. His YouTube video shows him confessing to nerves after buying a used car in Tijuana, but he says later in San Diego that everything went smoothly – despite two days in US custody – and that others considering the journey shouldn’t be afraid.” Maybe they should be afraid. At least just a little.

A few days ago, Biden announced another $800 million in security assistance to Ukraine.

Imagine what $800 million could do on our border. There still isn’t any money to build a border wall. Texas is shouldering the costs of deploying the National Guard to the border. Border personnel are still deprived of the resources they need to deal with the invasion of America.

The Ukrainians are entitled to secure their border. But why don’t Americans have that right?

Anyone who has a legitimate fear of persecution and requires political asylum can file their requests for asylum. The vast majority of arrivals however are economic migrants. The Southern land border now sees a vast horde of international migrants from India, China, Russia, and every other part of the world who fly into Mexico, rent cars, and drive up for asylum.

Open borders mean that we share a border with the entire world. And the world is showing up.

Maybe after spending billions securing Ukraine’s border, the Biden administration and some of its Republican open borders allies can give a thought to securing the border of a beleaguered nation being invaded by the Russians and by everyone else. A country called America.

Dr. Fred Eichelman: The Value of a Second Opinion