And we weren’t allowed to talk about it. 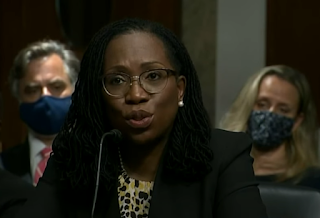 There is no way to know how many children had their lives ruined and their innocence stolen because Judge Ketanji Brown Jackson insisted on going easy on child pornography traffickers.

When Republicans tried to bring up Jackson’s horrifying actions, the media shouted them down.

Do you know what’s truly sickening, vile and grotesque?

When sentencing one pedophile, Jackson claimed that his crimes which included possession of a video of a “pre-pubescent boy being penetrated anally and orally”, were not “particularly egregious”.

227 leftists were arrested when they staged an insurrection during the Kavanaugh hearings because his high school yearbook contained a supposed coded reference to making out with a high school girl. The media “annotated” the yearbook of a man in his fifties speculating that “Orioles vs. Red Sox — Who Won, Anyway?” could be “jokes about being blackout drunk.”

But we’re not allowed to ask a judge who wants the top job in the country why she sentenced a violent child rapist to only 12 months with time served after he had lied about his whereabouts.

Instead of being locked up for a few years, he was out and committed another sexual assault, at which point Jackson once again went easy on him.

But if we talk about any of this, it’s “bigotry” and “hate”. Opposing the sexual abuse of children is the new hate. And every defender of sexually abusing children has jumped into the cause.

The Oscars, whose leading lights are responsible for more sexual assaults than an entire prison full of rapists, used their forum to attack Florida’s effort to protect children from sexual grooming in schools with the “Parental Rights Bill” which they and their media smear as, “Don’t Say Gay”.

The Left has embraced pedophilia in its Supreme Court nomination and in its opposition to parental rights. It rants that only haters would think that there’s anything wrong with going easy on pedophiles and that unrelated adults talking to kindergarteners about sex is a civil right and anyone who opposes it is a horrible bigot. No one who isn’t a pedophile or a Jackson agrees.

Even 52% to 36% of Florida Democrats support banning teachers from pushing sex on children.

Nationally, the vast majority of Republicans, Independents, Democrats, and human beings agree with the words of the bill, “Classroom instruction by school personnel or third parties on sexual orientation or gender identity may not occur in kindergarten through third grade.”

Disney, the former employer of Harvey Weinstein and dozens of sex offenders, disagrees.

Who gets to decide? As New York Magazine’s Jonathan Chait put it, “DeSantis’s Threats to Disney Is What Post-Trump Authoritarianism Looks Like”.

Authoritarianism has now come to mean letting parents and voters, rather than a major corporation, decide whether anyone who manages to obtain a teaching license should be pushing creepy sexual agendas on school children as opposed to the public-private pedophilia partnership that is fueling the hate campaign against parental rights.

A decade ago, the Sun Sentinel noted that over 175 Florida teachers had their teaching licenses pulled for sexual misconduct.

An elementary school teacher in Naples admitted to sexually abusing at least 19 children. Despite a little girl reporting, “Mr. Manley touches people’s private parts”, the educational system covered up for him and kept him on the job. An investigation published this year noted that “Manley began molesting children his first day on the job, and there wasn’t a single month during his employment at Parkside when he wasn’t abusing students.”

Who thinks it’s a good idea to authorize these types of people to talk to six years old about sex?

The media deems talking about this to be homophobic, transphobic, and, when discussing Jackson’s hands off policy on pedophiles, racist. Protecting children is hateful. Standing up for their innocence is bigoted. Opposing pedophilia is almost certainly some sort of hate crime.

Jackson could not answer what a woman is, because she’s not a biologist. Nor could she answer at what age a child deserves the right to live. After generations of embracing the murder of babies as the highest form of feminism, leftists now insist that the only real women are men, and that any babies they don’t manage to kill in the womb should be subjected to sexual grooming, puberty blockers, and any other monstrous tools for destroying their future.

Unlike Jackson’s decision to hand a mandatory-minimum sentence to a monster who uploaded a video of a “a prepubescent girl” being sexually assaulted which is instead seen as “loving”.

If the Left actually cared about women and children, there would be 227 protesters arrested to condemn the very thought of Jackson tainting the Supreme Court with her sickening presence.

Instead we’re lectured that Jackson’s nomination is “historic” because while there have been black men on the bench and women of all shades, she checks a box that has not yet been checked. Beyond the box of ‘pedophile enabler’ which was not born into, but honestly earned.

And we’re told that pushing sex on kindergarteners is also a wonderful form of love for them as if that weren’t the argument that every pedophile before them had made since time immemorial.

Now the Left wants pedophilia in the curriculum and on the Supreme Court as an “act of love”.

Love means fighting for the right to groom six year olds and to free child molesters. Hate has come to mean fighting for women and children, whether for their right to privacy and modesty, or to be free of the sexual coercion and abuse that has become the Left’s signature form of love.

Leftists chorus that anyone who opposes this leftist love is practicing hate. But behind this love is the worst kind of hate. And behind what the Left falsely condemns as hate is real love.

Pastor Ron E. Thompson: The Joy of the Cross