“How many more times are we going to watch this on the news? How many times are we going to read about it and say, ‘Oh we can’t do nothing to stop it?’” House Minority Leader Todd Rutherford demanded three years ago while pushing for gun control. “It’s time that we do all that we can to protect our children, to protect the lives of other people’s children, to protect the lives of people that simply want to go to Wal-Mart and go back-to-school shopping.” 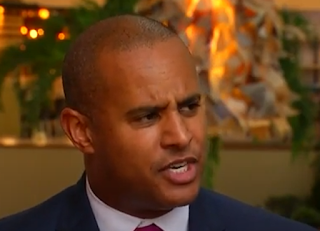 Now, acting as the lawyer for Jewayne Price, the suspect in the Columbiana Centre mall shooting in which 14 people, as young as 15 and as old as 73, were injured, the South Carolina Democrat watched as his client was released with an ankle monitor so he can go back to work.

All that we can do to protect our children involves banning guns while freeing criminals.

“We’ve got to take common-sense approaches towards controlling gun ownership to make sure bad people don’t get guns,” Rutherford has insisted.

Except when those bad people are his clients.

“I need the students of South Carolina to know that we are paying attention and that ‘never again’ actually means something in South Carolina,” Rutherford had argued during a previous gun control proposal. I’m sure that the 15-year-old injured in this attack is happy to hear that.

As are the children he wanted to condemn to death when he led a walkout to protest the fetal heartbeat bill, putting the abortion lobby ahead of the lives of babies.

Rutherford’s involvement hammers home the paradox of Democrat politicians who believe that guns need to be controlled and criminals don’t. Their efforts have unleashed an unprecedented wave of shootings in major cities even while they clamor for more gun bans that don’t work.

Instead of criminalizing guns, we need to criminalize criminals.

Murder are up 51% in South Carolina in the last 5 years.

Why might that be? The disastrous Omnibus Crime Reduction and Sentencing Reform Act of 2010, backed by Democrats and far too many Republicans, led to the closure of six prisons and cut the prison population by thousands of criminals. The prison population has declined from 24,000 a decade ago to less than 19,000. The projected population, accounting for demographics, should have been close to 30,000. That’s a difference of around 10,000.

What happens when a third of the prison population is roaming around South Carolina?

Murder rates are the highest they’ve been since 1993. In the 90s, growing crime rates were rolled back by locking up criminals with a clear turnaround kicking in by the end of the decade so that despite significant population growth in the new century, murders fell sharply and so did most other crimes. The same prison system that Rutherford decries and that pro-crime South Carolina politicians helped dismantle had done its job. Now that job has been undone.

If Rutherford really cares about protecting children, he would fight to lock up criminals. Instead, not just as a lawyer, but as a legislator, he has battled to keep criminals out of prison. And he has blamed anything and everything for shootings except the criminals carrying them out.

Rutherford, who had previously opposed attempts to keep Drag Queen Story Hour out of children’s libraries, also blamed FOX News for shootings, claiming, “these networks that broadcast what they call news, but it’s not. It’s really hate speech and coded language.”

Rutherford previously blamed the NRA and gun owners for making it too difficult to pass gun control legislation, but the latest mass shooting isn’t a call for gun control, but criminal control.

But if they can’t even control criminals, how do they hope to control everyone?

The politician and lawyer has addressed anti-police rallies and represented the family of a teen shot by police while advocating for police defunding.He pushed a bill to ban law enforcement from using automaticlicense plate readers, but proposes “controlling gun ownership”.

Rep. Rutherford’s House Bill 3322 would, in its original form, have released kidnappers, robbers, and killers while wiping out mandatory minimums.

None of this is a “common sense” approach to crime.

Rutherford has fought for mask mandates in schools, denouncing Gov. McMaster for proposing to protect people “without forcing them to do things that they do not want to do.”

The Columbiana Centre mall shooting shows how crime has begun to affect the state’s capital.

Police Chief Skip Holbrook has been reported as saying that around four percent of the population are committing 80 percent of the violent crimes in the city. That’s as true of Columbia, as it is of most major cities. A small population of career criminals and gang members is committing most of the crimes. When that population is locked up and closely monitored, public safety dramatically improves, and when they’re set free, they rob, stab, shoot, and kill at will.

Benjamin, like Rutherford, is wrong. The number of guns isn’t the problem, the number of criminals is. When Democrats free criminals and lock up guns, everyone lives in terror.

The Columbiana Centre mall shooting is just the latest reminder of that simple reality.

The way back begins with reversing South Carolina’s disastrous pro-crime measures which were enacted with “guidance” from left-wing and libertarian pro-crime groups that cut prison populations while growing the size of the criminal population roaming the streets.

Politicians boasted of saving hundreds of millions of dollars by closing prisons. Now as crime rates soar, the money gained has been lost ten times over.

And we can’t even begin to put a price on the loss of human life.

Mall shooters shouldn’t be roaming the streets. We can protect our children from them.

All we have to do is lock them up.

Greenfield: The Left's War on Childhood