Bill Clinton, once the youngest governor in the country, now only four years younger than Biden, came out of the shadows with a defensive op-ed, titled, “I Tried to Put Russia on Another Path”. 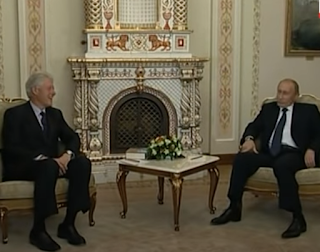 While the Clintons, like Obama, fashionably embraced Putin-bashing when it served their agenda of inventing a Russia scandal as a pretext for discrediting the 2016 presidential election and spying on their Republican political opponents, Bill’s history tells a very different story.

In My Life, his 2004 memoir, Bill Clinton praises Putin and uses him to attack Republicans.

After his first meeting with Putin, Bill Clinton wrote that he came away believing “Yeltsin had picked a successor who had the skills and capacity for hard work necessary to manage Russia’s turbulent political and economic life” and the “toughness to defend Russia’s interests”. He called Putin’s appointment, which helped end democracy in Russia, a “wise and shrewd move”.

After Putin was elected, Bill Clinton recollects that he “hung up the phone thinking he was tough enough to hold Russia together.” Soon Clinton is using Putin to bash Republicans, sneering that “even the Russian Duma was more progressive on arms control than the U.S. Senate” and supporting Putin’s refusal to hold off on the anti-ballistic missile treaty because “Republicans had been enamored of missile defense since the Reagan era, and many of them wouldn’t hesitate to abrogate the ABM Treaty in order to deploy it.” Putin good, Republicans bad.

Why was Bill Clinton flattering Putin in his autobiography?

The memoir was published in 2004. In 2005, Bill Clinton and uranium tycoon Frank Giustra visited Kazakhstan and cut a deal for the company that would become Uranium One to buy into the country’s state-owned uranium mines. Clinton foundations picked up over $100 million while Uranium One gobbled up uranium assets to eventually resell to Russia.

The deal that allowed Russia’s state-owned Rosatom to buy Uranium One was lubricated by millions more in donations to the Clinton Foundation and a $500,000 speaking fee from a Russian investment bank for Bill Clinton during which the former president met with Putin.

This was Clinton’s actual corrupt vision for Russia. The Russiagate dirty tricks operation came out of a network of business interests plugged into the Kremlin. The executive at the heart of Russiagate was a Clinton aide who “frequently interacted with senior Russian Federation leadership” and “set up meetings with senior Russian government officials” The dossier was touted by a lobbyist for a Russian oligarch close to Putin who had also employed both Christopher Steele and Fusion GPS: the tools for the attack on the 2016 election.

While we’ve heard about this often enough in the context of domestic corruption, the Clintons and their inner and outer circles were enthusiastic participants in the corruption of Russia.

Putin was not an unfortunate detour from democracy, as Bill Clinton insists, but exactly the sort of man to perpetuate the corrupt system that the Clintons and their special interests wanted.

The last thing the Clintons wanted for Russia was democracy and an end to the corruption.

Bill Clinton complains that Putin “could have used Russia’s prodigious skills in information technology to create a competitor for Silicon Valley and build a strong, diversified economy. Instead he decided to monopolize and weaponize those abilities to promote authoritarianism at home and wreak havoc abroad, including by interfering in the politics of Europe and the U.S.”

And it was the Clintons who got Putin involved in interfering in American politics. The millions funneled into Clinton foundations helped maintain staff and cultivate donors for Hillary’s presidential campaigns. And then Clintonworld figures used their Kremlin links to manufacture Russiagate and create the false narrative that Bill Clinton is still trying to keep alive.

In his op-ed, Bill Clinton touts the role of former Defense Secretary William Cohen. He neglects to mention that the Cohen Group, aside from its notorious ties to China, has boasted of “decades of experience working with officials in Moscow”, and “building relationships with government decision makers”. Two years ago, Cohen was claiming that “President Putin is going to try and step in and be the peacemaker here” between America and Iran.

Bill Clinton defends former Secretary of State Madeleine Albright. Once again her Albright Stonebridge Group promised to advise clients how to do business in Russia by enlisting politically connected former Russian government officials. This is typical of Clintonworld.

Under Bill Clinton and his wife, Putin’s regime became wealthier and more powerful as donors moved money into Russia and into the various Clinton enterprises including from a Putin-linked billionaire who was sanctioned under Trump and has been sanctioned now yet again.

The Clintons were complicit in enabling the dumping of cheap Russian uranium in America, thereby destroying our domestic mining industry and funding Russia’s military industries.

Bill and Hillary Clinton did not try to “democratize” Russia, rather political and business interests in both countries joined forces to cash in while corrupting both America and Russia. Democracy had made it difficult for foreign companies to pursue business interests in Russia. With Putin in power, surrounded by his ‘siloviki’, it was easy to know who to bribe in order to make a deal.

And the Clintons, with their connections, were a conduit for donors looking to make a deal.

The problems only began when Putin, unsatisfied with controlling Russia’s economy, and those of a few allied former republics, began to expand his sphere of economic influence by force.

Even at this late date, Bill Clinton is pretending that he was a benevolent public servant who was only thinking of what would be best for America, Russia, and the world, not the Clintons.

The ugly truth is that the Clintons led the way in corrupting and making the world less democratic. The fall of the Soviet Union had opened up opportunities to change the world that the Clintons transmuted into corrupt deals with oligarchies that swiftly became tyrannies. The springtime of the world that millions of Americans had struggled and fought for during the Cold War instead became an opportunity for our political class to score a few million here and there.

Not only didn’t Russia and China become more democratic, but America came to resemble them. The corrupt entanglements of Hunter and James Biden, like those of the families of John Kerry, Harry Reid, Neil Bush, and other political class players sold out democracy for corruption.

Hunter Biden with his prostitutes, Chinese billionaires, and crack habit is just the latest incarnation of the Clinton model in which our oligarchs and theirs do dirty deals together.

And the world is a worse place for it.

“Before I left Moscow, Putin hosted a small dinner in the Kremlin with a jazz concert afterward,” Bill Clinton recalled in My Life. “John Podesta, who loved jazz as much as I did, agreed with me that we had never heard a finer live performance.”

John Podesta’s brother, Tony and his Podesta Group, went on to work for a Putin puppet and were shut down when they were caught up in a Russiagate investigation. Tony Podesta has since been paid $1 million to lobby the Biden administration by China’s Huawei which is now also playing a major role in Putin’s Russia.