So many great things we recall from growing up are being shoveled over by a new evil in America. The transgenderism of things that once illustrated morals and ethics in our nation. Sadly that includes Disney Land and Disney World.

So many great Disney memories and films we grew up with and one that could be remade with a new ending could be Snow White and The Seven Dwarfs. Picture this if you will:

Snow White lies comatose from a poisoned apple and around her are the Seven Short People. One of them speaks.

Doctress (formerly Doc), applying lipstick: “You forget the story. A handsome prince, whatever that is, will come by and kiss her to awaken her.”

The Short People sigh in relief. Just then a large horse arrives with a large figure dressed in finery. “Have you come to awaken Snow White with a kiss?” they ask.

The face of the horse rider grows puzzled and a non-binary type voice announces, “I cannot really do that as I am not sure what gender is best for me in this fairy tale…”

Just then a flying figure on a broom stick appears and cackles, “Who needs to use poison to become queen anymore–I have Woke on my side!”

It is hard to imagine such beautiful animal films like Dumbo and Bambi when the mother and father figures lose what was very important to the story. And what happens to the Mickey and Minnie relationships, as well as Donald and Daisy. When Disney went from animation to real life films the role of both sexes was very important. Disney virtually set guidelines in films that other companies tried to follow in film and TV series, where men and women had separate but equal roles as fathers and mothers. The theme parks themselves, in California and Florida, made family utmost in importance and gave all of us a place to someday take children and grandchildren.

We have to wonder what happened. It is as though this idea of WOKE has gone beyond anti-family. It is anti-Christian, an attack on God and is very Satanic. Sadly, too many have gotten caught up in this including Joe Biden and many others in his party.

But if you do just a little research into what in the world has happened to Disney, you will learn some startling things. The public is now becoming aware of a terrible change in Disney, which has more families boycotting both Disney products and the theme parks.

And leading the charge in Disney’s Leftist causes is Walt Disney’s granddaughter. Abigail Disney, is very outspoken on social media regarding her pure, unadulterated hatred for all-things-Republican. She holds no punches about how much she not only despised President Trump, but she also seems bent on destroying everyone and everything who ever supported him or tries to follow in his footsteps. She is at the forefront in pushing leftist agendas onto her grandfather’s company. 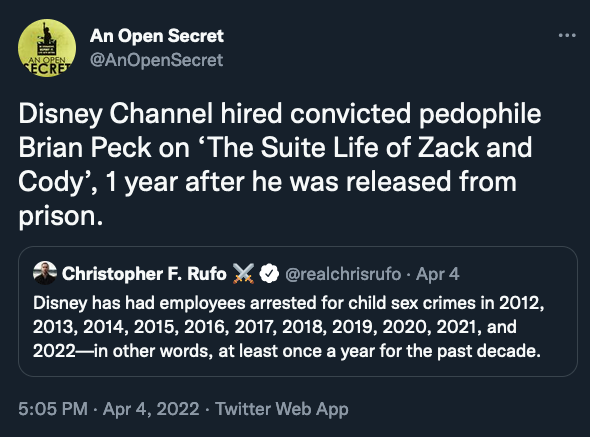 But this goes far beyond politics–it is much darker and dangerous and involves our children. I strongly encourage you to read journalist Emerald Robinson’s article entitled ‘Why Does Disney Hire So Many Pedophiles?‘ In her piece she discusses a recent pedophile sex trafficking bust in Florida which Disney workers were caught soliciting children. And in this article you will learn that there have been many other pedophile charges over the years among people who work in the Disney parks and also executive levels of The Disney Company. It is happening enough to say it is rampant.

So it should be alarming to all parents that the #1 company associated with children is at the forefront in proudly promoting a gay agenda geared specifically toward kindergarten through elementary aged children. This is definitely much deeper than just not being able to say, “Gentlemen and ladies, boys and girls…”

Meanwhile Disney has been attacking the governor of Florida, Ron DeSantis who sent the LBGT community and the woke corporations into a frenzy when he championed (and signed into law) an anti-groomer bill that prevents school teachers from grooming 5-year-old children about deviant sex practices. The bill is called the Parental Rights in Education Act. It ensures parents can send their kids to kindergarten without gender ideology being injected into instruction and they will be notified and have the right to decline healthcare services offered at schools. The governor has been attacked by the liberal media, which insists it is an “anti-gay law.” The word “gay” is not even used, but leftists would have us believe that the percentage of people in the LBGT community is quite high and they hate it when members in the community have actually gone public in expressing anti-woke feelings and supporting Governor DeSantis.

And how do you think Disney is handling all of the bad publicity they’re getting about pedophilia and people upset that they are fighting against laws that would prevent child grooming? They have hired a former Obama and Hillary Clinton aide as their new Lead Spokesperson. Her big plan is to blame all of Disney’s bad PR on…Republicans. Of course.

It is sad this change in Disney and this writer remembers well how great the theme parks were at one time. Where not just the idea of family was celebrated, but patriotism as well. I took my family to Disney World in Florida when it opened in 1971 and an interesting thing happened. My wife and I worked with an organization titled Volunteers in Vital America, (VIVA) a program to bring back Missing-In-Action service people believed to still be in Vietnam. The organization was chaired by Bob Hope and run by Ronald Reagan’s daughter, Maureen Reagan. It raised money by selling bracelets, each with the name of a service man or woman believed to be alive and captive still in Vietnam. We had just entered the park when one of the young Disney ladies working there spotted the bracelet I wore and knew what VIVA was all about. I told her I had bracelets with me and that we would be selling them in the park (a huge ‘no-no’ now, of course). Almost immediately, with her help, we were surrounded by young men and women wanting to talk with us. All the bracelets we brought that day–over 100–were sold. This is the Disney I want to remember.

But what can we do about the now potentially dangerous Disney of today? In November we have a vital Congressional election. We must support candidates who oppose the “Woke” movement, Critical Race Theory Curriculum in schools and the sort of things now being promoted by Disney. It is time for parents to act for the protection of their children.

Another big way we can make our voices heard is by petition–literally showing the powers-that-be just how many of us are out here. We need to let them know we disagree with the dangerous direction The Disney Company is trying to take our children. My pastor, Thomas McCracken, has created such a petition and we ask that you click HERE to sign. Pastor McCracken said this is the first time in 25 years of ministry he has felt led to do something like this.

Abigail Disney recently tweeted that she and her leftist followers far outnumbered all of the crazy ‘right wingers’ who are against their agenda. They are basically so isolated in their beliefs that they have no idea how many of us are actually out here. Let’s prove her wrong.

How Democrats Made America Dependent on Russian Uranium

Pastor Ron E. Thompson: The Joy of the Cross