Last year, Secretary of Defense Austin claimed that a new strategy called “integrated deterrence” would be at the heart of Biden’s new defense strategy. Last month, he was talking up a new National Defense Strategy driven by integrated deterrence while claiming that it would prove effective against Russia in the war in Ukraine. Instead the war showed “ID” doesn’t work. 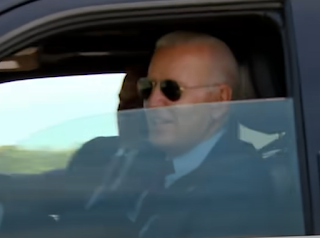 What is “integrated deterrence”? It sounds better than leading from behind, which was Obama’s version of it, but it’s not too different from the failed approach of the Obama administration.

Like a lot of organizational jargon, “integrated deterrence” is a collection of meaningless buzzwords that no one understands concealing the same old thing that dresses up failure as success because under the exciting new approach, no one was even trying to succeed.

Integrated deterrence, if you listen to Austin, is everything and therefore nothing. ID is going to perfectly integrate together all military capabilities without regard for service rivalries, combined with all elements of the federal government, and be ready to go anywhere at home or across the globe without any friction or limitations, while also seamlessly integrating with our allies.

Or, as Austin put it during a visit to Poland, integrated deterrence uses “the capability and capacity that’s resident in our partners and allies.” Or, you know, leading from behind.

ID means being “integrated across our allies and partners, which are the real asymmetric advantage that the United States has over any other competitor or potential adversary,” Colin Kalh, Biden’s undersecretary of policy, had claimed. “Our adversaries know that they’re not just taking on the United States, they’re taking on a coalition of countries who are committed to upholding a rules-based international order.”

America has plenty of asymmetric advantages. Being tied to the Germans and the French, not to mention the awesome might of a variety of small countries that have marginal militaries and no desire to fight is not making China, Russia, or anyone else tremble in their leather boots.

A rules-based international order has not stopped a single war or deterred any aggressor.

Announcing that our true asymmetric advantage is that we have allies is just an excuse for dumping the problem on them and then leading from behind. That’s what Biden keeps doing.

And it isn’t working.

Biden’s Pentagon flacks and hacks keep talking up the “integrated” part, but haven’t actually integrated anything and they certainly haven’t deterred anyone.

The “rules-based international order” has not stopped China’s incursions into Taiwan’s airspace (not to mention its violation of its agreement over Hong Kong’s civil liberties), the Taliban’s takeover of Afghanistan, or Russia’s invasion of Ukraine. Had they been unable to defend themselves, they would now be just another conquered province. That is the real lesson here.

That’s the lesson every country, predator or prey, around the world is taking to heart.

Integrated deterrence saw its first real field test in the Ukraine war. And it failed.

International outrage, condemnation, and even the most punishing sanctions failed to stop Putin. Much as Obama’s previous sanctions had done nothing to stop Putin from claiming Crimea, and as sanctions had likewise failed to do anything but annoy everyone from Saddam Hussein to the Kim crime family to the otherwise bankrupt socialist regime in Venezuela.

“You’re seeing us lead with diplomacy. You’ve seen us work very, very carefully with our allies and partners to share information,” Austin claimed in Poland.

Leading with diplomacy is appeasement and it works almost as well as sanctions. But, equally important, information sharing has been nearly as disastrous, not only among allies who were blindsided, as with the Poland plane deal, but even within the White House. Much as Obama and Kerry blindsided each other over Syria’s chemical weapons, Biden, his cabinet members, and White House comms people keep contradicting each other about Ukraine and Russia.

If the Biden administration can’t even integrate its own responses to a crisis at the White House level, what hope is there for the fantasy of a federal and multinational team “all woven together and networked” across all levels and theaters that lies at the heart of the ID fantasy?

The Biden administration hasn’t even figured out how to crawl and in typical prog fashion unveiled a plan to not only fly, but encompass all space and time with a single thought.

Integrated deterrence provides a familiar set of excuses for not doing things.

Secretary of Defense Austin and other Pentagon brass are using ID to shift the burden away from building up a military that is ready to fight and win wars over to the State Department and other parts of the government. The deterrence part already signals retreat while the integrated part assigns the responsibility to everyone else including foreign governments and militaries.

While America’s partners aren’t where they need to be, the massive amounts of money we spend on the military are meant to buy us real offensive and defensive capabilities, not excuses.

Integrated deterrence deemphasizes the role of the military while focusing on alternatives to it as the solution to conflicts. This isn’t a new idea for Democrats and the Left, it’s also notoriously ineffective. The military can’t and shouldn’t be the default solution to everything, but neither should we pretend, as Biden is doing in Ukraine, that there are a variety of effective non-military solutions to military problems. We can choose to engage or not engage in conflicts, but when we get involved in a war by throwing out useless non-military solutions, we show weakness.

And that makes it more likely that we will end up having to fight a real war.

Integrated deterrence asks top defense officials and military leaders to act as if non-military solutions are military ones. But just as it’s not the job of diplomats to fight wars, diplomacy is not the work of generals. Yet under Obama and Biden, the military has been dragged into doing the work of diplomats in Libya and Afghanistan even as our military capabilities have declined.

We want generals to win wars, not negotiate with enemies. That absurdity is how Chief of Staff Gen. Milley ended up assuring his Chinese opposite number that he would warn him of any attack. It’s bad enough when diplomats act like this, it’s much worse when generals do.

And yet turning generals into diplomats is what integrated deterrence is built on. Not only don’t we get good diplomats out of the deal, we also get useless generals.

Beyond integrated deterrence, Biden defense officials increasingly champion “holistic” solutions which efface specific capabilities. They insist that America’s military isn’t being weakened, it’s becoming more “flexible” and “responsive”, even as they eliminate metrics for everything from individual soldiers to classes of aircraft. When everything is “flexible” and “integrated”, then nothing actually works because everything is a giant buzzword that never means anything.

It doesn’t matter how well the F-35s work or whether the new fitness standards for recruits amount to anything because what really matters is the unsolvable puzzle, not the pieces.

That is invariably how leftist projects, which are all about the vision, not the details, fall apart.

When the real solutions don’t come from the mere deployment of force, but emerge out the syzygy of identity politics, inspirational talks about innovation, and emergent integration of everything that military leaders have become obsessed with then battlefield competence becomes a footnote in a progressive vision of tomorrow’s military that doesn’t work today.

And may never work.

Ukraine has shown that integrated deterrence is another in a series of Potemkin villages cloaking the same bad ideas in buzzwords and jargon. ID, in Obama’s familiar line, tries to make a weakness seem like a strength, but in reality it just makes everything into one big weakness.