In 1998, Congress passed the Mickey Mouse Protection Act. In a classic case of bipartisan corruption, the bill brought together Republicans, along with Barney Frank and John Conyers, to do a special favor for Disney and for other entertainment industry companies. 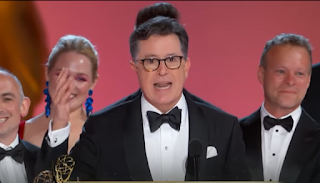 The Mickey Mouse Act (formally the Copyright Term Extension Act) was one of a series of measures that took the original copyright system, meant to protect an author’s rights, and instead turned it into a permanent monopoly cash cow for Hollywood studios.

Mickey Mouse, a character created in the 20s, will only become public domain in 2024.

That is if Republicans don’t once again decide to do a special favor for Disney, Warner Bros, and a number of other massively woke and wealthy entertainment industry monsters.

In response to Disney’s support for pushing sexual indoctrination on kindergarteners, Rep. Jim Banks has sent a letter warning that the free ride was over.

“It’s hard to believe that anyone would have considered extending the already lengthy term, but there’s no way they will get the ear of any Republicans after their radical political activism. America’s strong copyright protections helped make America great — they gave our creators and distributors the right incentives to produce content that shows the world the importance of freedom. But Congress should not add to Disney’s 90+ years of federal copyright protection to incentivize its new far left agenda,” Rep. Jim Jordan said.

Disney had spent around $150,000 on members of Congress considering the bill in the 90s. The company these days allegedly spends millions on various direct and indirect lobbying efforts.

If Congress does nothing, Mickey’s copyright will expire in 2024, followed by Pluto in 2026, Goofy in 2028, and Donald Duck in 2029. Snow White and the Seven Dwarves will lapse in 2032, followed by classic Disney movies like Pinocchio, Dumbo, Bambi and Cinderella.

Beyond Disney, Superman’s copyright ends in 2033, Batman’s copyright in 2034, and Wonder Woman in 2036. In another blow to Warners, Bugs Bunny goes public domain in 2035.

While the copyrights apply to specific works, like Mickey Mouse in Steamboat Willie or the first Superman comic, it would open up opportunities for independent creators and companies.

Including conservatives and traditionalists who want to recreate American culture.

Disney and Warners, among others, would stand to lose billions in profits from these characters. They’ll fight for another copyright extension if they can, and if they can’t, will try to sneak in poison pills that will keep anyone else from being able to use them while bribing politicians left and right. Literally. Conservatives haven’t cared about this in the past. Now they should.

Opposing copyright extension is about more than just punishing Disney for wokeness.

Companies like Disney and Warners have built massive war chests of intellectual property that their current management and even ownership had nothing to do with creating while robbing the original creators, on whose behalf copyright laws and extensions were passed, of the profits.

Last year, Disney’s Marvel filed five lawsuits to block the families of Stan Lee, Steve Ditko, and other creators of classic characters like Spiderman, Iron Man, Thor, and many others, from reclaiming copyright. This is the latest episode in a series of legal battles over comic rights (Superman creators Jerry Siegel and Joe Shuster were originally paid $130 for the rights) and with the artists, creators, and animators who made the entire comic book industry possible.

Entertainment industry wokeness is built in large part on taking classic characters and “renewing” them by pushing them to be more politically radical, racially recasting them, or killing the characters off entirely and replacing them to prepare for the end of their copyrights.

Hollywood, increasingly incapable of producing popular original stories, is farming properties that are almost a century old to wring the last shreds of profits from them. The industry and our culture would look very different if it didn’t consist of a few companies milking a few characters.

Freeing classic characters into the public domain could enable the rise of an alternative more traditional entertainment industry. And one that might better reflect the values of their creators.

Walt Disney was a Republican. J.R.R. Tolkien (The Hobbit’s copyright lapses in 2033) was a deeply religious conservative traditionalist. Steve Ditko, the co-creator of Spider-Man and Dr. Strange, was an Objectivist. Superman’s creators were Zionists. Many of them would be disgusted by the woke ways in which their work is being twisted by the companies that control them. Few of them would be employable by any of those companies today. Indeed even some living creators, like J.K. Rowling, are being canceled by the companies cashing in on their work.

Copyright laws made it possible for creators to earn a living as full-time writers and artists, but the modern Grub Street exploited copyright by giving creators pennies and then using lobbyists to build copyright empires while making it all but impossible for new creators to get started.

The Mickey Mouse Protection Act already extended copyright beyond any possible lifetime of a creator. Heirs have had to spend years or decades in court battling for any of the profits. There’s no possible moral argument for yet another copyright extension and compelling arguments for preventing Disney, Warners, and other woke corps from permanently exploiting copyright.

Our culture would be better off taking apart Hollywood copyright empires, built on the work of exploited and cheated writers and artists, and making it accessible to everyone. The results couldn’t be any worse than Disney execs boasting of “queering” content meant for children.

Culture is meant to be a common heritage, not a permanent corporate asset.

Gone With the Wind’s copyright expires in 2031. That means people will finally be able to watch it without HBO Max forcing them to sit through a speech on how they’re a bunch of racists. They’ll however have to wait until 2039 for Song of the South to escape from Disney’s vault.

Is there an argument for keeping either one locked up for decades in the thrall of companies like Disney and Warners that despise them and have nothing but contempt for their audiences?

Setting Mickey Mouse free does more than just punish Disney or rebuke Hollywood’s corrupt business model which only exists because enough politicians in California and Washington D.C. have been bribed to make it possible, it frees people to engage with their culture. The entertainment industry is building a world of culture renters who don’t actually own the digital books, songs, comics, shows, games, and other items that they’ve bought online.

The best defense against copyright plantations is liberation. Once the creators and partners have passed on and a work is culturally significant, it should belong to the culture, not to a corporation. We don’t live in a world in which Beethoven’s Fifth is wholly owned by Amazon, all the rights to Shakespeare’s works by Netflix, or the Mona Lisa by Disney.

And it’s a good thing too.

Both our society and the free market are best served by allowing those works to enrich new creations, instead of being locked up in the Disney vault to be perverted more and more.

And Disney, Warners, and other companies, no longer sitting on a monopolistic culture hoard, would actually have to create new things and engage with more than just their own woke set.

That would be good for them, for us, and for the culture.

Republicans are waking up and warning that Disney won’t get any more free rides. Neither should the rest of the entertainment industry. Americans need a vital, diverse, and active culture market, not one in which a handful of woke titans force their political dogmas on the country.

Breaking up their copyright monopoly would free Mickey Mouse and free our culture.