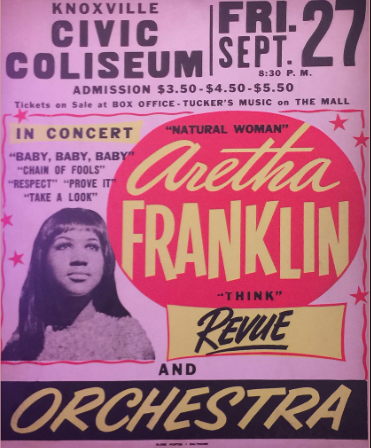 “I think of Aretha as our Lady of Mysterious Sorrows. Her eyes are incredible, luminous eyes covering inexplicable pain……Anguish surrounds Aretha as surely as the glory of her musical aura.” ~Atlantic Records Producer Jerry Wexler, from Rhythm and the Blues: A Life in American Music

The greatest export that America has offered to the rest of the world is our music. The legacies and art of our musicians and singers continue to imprint upon the souls of those with a set of open ears and an open heart. The music of America is part of what Carlos Santana calls the “Universal Tone.” A presence of sound that connects us all.

The songs sung by the recently departed Aretha Franklin are part of the soundtrack of our shared existence in this world. Aretha Franklin has been called, quite accurately, “The Queen of Soul.” Aretha was a consummate musician. In a recording career that spanned for 62 of her 76 years, Ms. Franklin aptly covered the genres of Blues, Pop, Funk, Gospel and Opera, among other forms of music. She was an incredible piano player and composed or co-wrote many of her songs.

When Aretha Franklin recorded other artists songs, such as Otis Redding’s “Respect,” she incinerated the original version to the point that it was forgotten in the glory of her voice. That seminal voice came to fruition in her Father’s church. Gospel was the bedrock foundation of her artistry and she demonstrated her church background every time she sang.

Aretha Louise Franklin was born on March 25, 1942 in Memphis, Tennessee. Her parents were Reverend C.L. Franklin and Barbara Siggers Franklin. C.L. was a circuit preacher, from Shelby, Mississippi, and Barbara was an accomplished singer and pianist. Her parents had three children in total from outside of their marriage. When Aretha was two, the family moved to Buffalo, New York. In 1946, Reverend Franklin permanently relocated the family to Detroit, Michigan to take over the pastorship of New Bethel, Baptist Church.

Here is where the story becomes somewhat murky. The Franklin’s had a troubled marriage and C.L. behaved like a Baptist St. Augustine. He loved to party and he loved to womanize. Barbara had enough of his philandering and decided to stay in Buffalo. There have been many stories over the years that Aretha’s Mother had abandoned her children. Some of those same stories have been repeated in recent obituaries about Aretha. Nothing could be further from the truth.

Aretha visited her mother in Buffalo and Barbara also visited the children in Detroit. Tragically, when Aretha was 10, her Mother died from a heart attack. During this period, Aretha’s Grandmother Rachel and the Gospel singer, Mahalia Jackson, helped to take care of the children of the Franklin household. During this period Aretha taught herself to play piano by ear. Like many children who lose a parent early, Aretha discovered that music was the medicine that helped her heal.

Reverend C.L. Franklin was a great singer himself and he was a huge influence on Blues singer, Bobby “Blue” Bland. He earned thousands of dollars from his sermons in various churches throughout the country. The Franklin home played host to many musical and spiritual luminaries such as Martin Luther King, Reverend James Cleveland, Clara Ward, Jackie Wilson and Sam Cooke. Clara Ward was, in particular, a personal and musical role model to the young Aretha.

Aretha made her public singing debut at New Bethel church singing the hymn, “Jesus Be a Fence Around Me.” Her father started to take her on tour with him and she sang at various churches. In 1956, Reverend Franklin helped his daughter sign her first recording deal with J.V.B. Records where her first record, “Songs of Faith” was released.

At the age of 16, Aretha traveled with Dr. Martin Luther King, she sang at Dr. King’s funeral in 1968. She also spent a lot of time touring the circuit in Chicago staying at the home of the Staples Singers.

Influenced by the example of Gospel turned Pop singer, Sam Cooke, Aretha decided in 1959 to go towards recording and performing more secular music. In 1960, at the age of 18, she signed with Columbia Records under the guidance of music producer, John Hammond. Hammond called Franklin,

“ The greatest voice since Billie Holiday.” Her first single for Columbia was, “Today I Sing the Blues.” But she did not sing a lot of Blues, at least literally, during her tenure with Columbia.

Aretha recorded a dozen albums, and almost an equal amount of singles, for Columbia. I feel the problem with Aretha Franklin’s Columbia period is that they did not understand her Gospel background. They were trying to turn her into a Pop chanteuse in front of big band. Worst still, they did not allow her to fully utilize her piano playing ability. A huge mistake.

In 1966, Aretha did not renew her contract with Columbia. Instead, in January 1967, she made a smart move and signed with Atlantic Records and had pristine R&B Producer, Jerry Wexler guiding her first recordings with that label. Wexler took Franklin down to Rick Hall’s Fame Studios in Muscle Shoals, Alabama. There with the Muscle Shoals studio players( Affectionately known as The Swampers) she recorded the classic track, “I Never Loved a Man the Way I Loved You.” Unfortunately, because of a dispute between Franklin’s then husband, Ted White and one of the horn players, Aretha never returned to Fame studios. A great pity.

However, Wexler brought the Swampers up to New York. Along with classic R&B saxophone player, King Curtis, they recorded Aretha’s debut album, also titled “I Never Loved a Man the Way I Loved you.” This album also included Aretha’s version of Otis Redding’s, “Respect.” A classic interpretation which included Aretha’s own R-E-S-P-E-C-T refrain. This song was considered to be part of the soundtrack of the burgeoning feminist movement.

Personally, I especially like the albums that followed in Aretha’s Atlantic period. Namely “Lady Soul and Spirit in the Dark.” The main reasons being the movement of Aretha’s piano to being crucially present in the mix of those albums. Make no mistake, Aretha Franklin was every bit the piano player that Ray Charles was. Her fills behind her transcendent vocals were very similar in a supportive approach like Ray Charles’ own work. Also two of my favorite guitar players are featured on those albums, Eric Clapton on 1968’s “Lady Soul”and Duane Allman on 1970 release, “Spirit in the Dark.” Both guitarists claimed that playing behind Aretha was “total inspiration.”

From the late 1960’s through the mid-1970’s, Aretha had a litany of hit singles for Atlantic. These included songs such as “Spanish Harlem, Rock Steady, Day Dreaming, Chain of Fools,”among many.

But by 1975, her Atlantic albums started diminishing in sales. By 1979, Aretha left Atlantic. In 1980, she signed a recording contract with Arista records. She also appeared in and stole the movie, “The Blues Brothers” from it’s stars. The early years at Arista were also full of hit albums, like “Who’s Zooming Who?” That contract lasted until 2004. After a couple of albums with smaller labels, Aretha signed with RCA records in 2014. Her last great album was the RCA album, “Aretha Sings the Great Diva Classics, which included a cover of Adele’s “Rolling in the Deep.” Throughout her career Aretha Franklin won many music awards and was the first woman inducted into the Rock and Roll Hall of Fame.

By 2010, the great Diva, the Queen of Soul, Aretha Franklin was not in the best of health. In December of that year, she had an operation that allegedly revealed the beginnings of pancreatic cancer. Think about it, she lasted almost eight years, fighting the disease, continuing to tour and record. She died on August 16, 2018 due to complications from this disease. Spooky and sad to consider, she died on the same day of the month as Bluesman Robert Johnson and Rock and Roller, Elvis Presley.

Without any hesitation, Aretha Franklin was an example of the human spirit triumphing over adversity. Through several bad marriages, she remained the Queen she was. It was not the title of the Queen of Soul that made Aretha who she was, it was the woman that made the title. Her music was of great importance to me. As a guitarist, I once went through a period of imitating her vocals in the solos I was doing. As a musician and singer, I learned so much from her deep Gospel and Blues phrasing. After my mother’s funeral, in March of this year, I went back to my brother’s house and listened to, over and over again on headphones, to her version of Simon and Garfunkel’s “Bridge Over Troubled Water.” Another example of Aretha making a classic her own classic. Another moment in the soundtrack of my existence.

There are many moments of my life that have been framed by Aretha Franklin’s music. She was a very classy woman, an American icon and, despite her many imitators, the true Queen of Soul.