After canceling six Dr. Seuss books on spurious charges of racism, the massive German publishing giant and the secretive company that owns the rights to the deceased author’s work announced that they would be unveiling new “inclusive” Seuss books by diverse writers.

Seuss, or Theodor Geisel, an old dead white man is insufficiently diverse for his publishers. 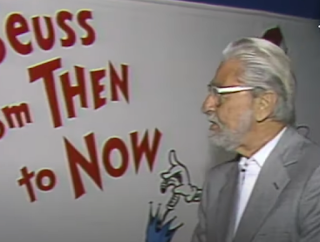 While the names of the new stable of “inclusive” writers haven’t been made public, Penguin Random House, a subsidiary of the German Nazi-linked Berteslman giant, also publishes or distributes prominent racists like Ibram X. Kendi, Robin DiAngelo, and Ta-Nehisi Coates.

CEO Markus Dohle recently announced a $500,000 fund to fight against parents trying to keep critical race theory hatred and racist books, like those promoted by Penguin Random House, out of schools. The German subsidiary has also published “Anti-Racist Baby” and other racist children’s books by Ibram X. Kendi through Random House Children’s Books.

The line between Penguin Random House and Dr. Seuss Enterprises is hazy at times. Seussville, the cutesy book site, is run by Random House. The two organizations appear to closely collaborate together on finding exciting new ways to strip mine Dr. Seuss’s legacy.

While Dr. Seuss was reluctant to embrace merchandising and exercised careful control over his work during his lifetime, he left behind no real family or children. Since then he has become, in the words of Dr. Seuss Enterprises, a “brand” to be licensed for movie deals, clothes, NFTs, and every kind of junk that those who knew him believed that he would have absolutely hated.

And so there’s an NFT, a partnership with the anti-American women’s soccer team to promote “girl power”, the Dr. Seuss Experience, and a steady stream of “new books” and “lost stories”.

The launch of Seuss Studios with its “inclusive” authors basing entire books around a single Seuss sketch disguises the cynical strip mining under the veil of identity politics.

When the original six Seuss books were canceled and banned, some conservatives defended it as a decision by a private organization. Dr. Seuss Enterprises is certainly private. It’s so private that there’s surprisingly little information available about its basic composition. For good reason.

Susan Brandt, the CEO and president of Dr. Seuss Enterprises, used to be the VP of Home Entertainment at 20th Century Fox. The board allegedly includes only one family member, Ted Owens, a great-nephew of Geisel, who disagreed with the purge of the author’s work.

Dr. Seuss Enterprises was originally set up by Geisel’s former mistress, a neighbor who snapped him up after Helen, his beloved wife, committed suicide over the illicit affair. While Geisel’s original wife had closely partnered with him in creating his beloved works, his new wife allegedly sent away her own daughters and took over his life.

Audrey Diamond, two decades younger than the author and illustrator, who allegedly had an affair with Seuss while he was still married to his first wife, became Audrey Geisel. After his death, she set up Dr. Seuss Enterprises. After her death, the organization became even more money hungry and generically woke, leading to the purge of works by its golden goose.

Forget “If I Ran the Zoo”, it’s “If I Ran Dr. Seuss Enterprises” that’s much more offensive.

The most vocal board member of Dr. Seuss Enterprises is Kyle Zimmer. Zimmer, a leftist activist, has been dubbed a “social entrepreneur” and writes about “racial equity”.

During the 2020 race riots that murdered police officers and devastated communities, Zimmer declared that, “America is on a critical journey: from identifying racism, to deeper understanding – and finally to dismantling systemic racism.” Racist material aimed at teachers distributed by his organization quoted racist author Ta-Nehisi Coates and ranted about “white privilege”.

It’s not hard to understand what happened to Dr. Seuss.

What better way to get rid of whiteness than by replacing Dr. Seuss, recasting him like so many movie and television characters, and swapping him out for a more diverse Dr. Seuss.

Fictional characters have been racially recast before, but this may be the first time that a real human being was recast because he was too white and insufficiently diverse.

Dr. Seuss entertained millions and his brand is worth a fortune, so much so that the greedily litigious Dr. Seuss Enterprises decided to sue over a Star Trek parody comic, Oh The Places You’ll Boldly Go, and spent 5 years battling it all the way to the Supreme Court until the comic publisher, who was suffering from Stage 3 cancer, decided to give in and settle.

(It’s not hard to imagine a Dr. Seuss parody about the sociopathic social justice monsters who did that, but if you dare to write it out, Dr. Seuss Enterprises will sue you until you’re dead.)

But despite how lucrative owning a human being as a brand may be, Seuss was too white and too old. To the Hollywood and toy people who own his name, he’s just another character to be recast, the way that Spider Man or Iron Man might be replaced to be more diverse.

And then the money will really come rolling in from the NFTs, the movie studios, the Kohl’s and Target deals, the Dr. Seuss Experience, and the newly diverse Seuss Studios.

Dr. Seuss is much too white to play himself. It’s time for a more diverse Dr. Seuss.

Greenfield: The Frictionless Souls Addicted to the Cause