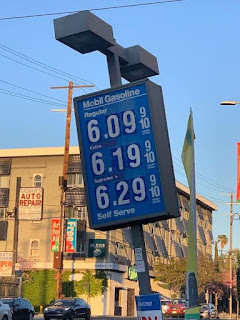 An unpopular administration has been gifted a crisis by Putin and is seeing to it that it doesn’t go to waste. Biden had been unable to evade the blame for rising gas and food prices, but going forward the skyrocketing price of gas and food, in particular anything with wheat, will be blamed on the Russian invasion. While the invasion will certainly impact energy and food prices, the fundamental force driving the price hikes is still inflation caused by government spending.

Putin’s invasion provides a perfect pretext for allowing the Biden administration and its congressional allies to go on printing money and shutting down the economy with regulatory impositions while blaming the resulting economic crisis on the situation in Ukraine.

That is why Biden doesn’t want to stop Putin. Our intelligence people had all the necessary information on the invasion plans. We knew everything that was going to happen. Had Biden really wanted to deter the invasion, there were multiple options for heading off the war. Instead Biden made it clear that there would be no intervention, just sanctions he knew would not work.

Bloomberg News reported that the Biden officials who created the sanctions knew they wouldn’t work.

“No one expected the sanctions to prevent anything from happening,” Biden later admitted.

Indeed the Biden administration fiercely fought against the efforts of Senator Ted Cruz and other Republicans to impose sanctions before the invasion because they wanted Putin to invade.

Only if Putin invaded Ukraine would they have the leverage to maintain a crisis, ransack the economy, consolidate corporate economic responses, and transform our foreign policy.

The sanctions regime, under which we import massive amounts of Russian oil but payment processors are ordered to cut off access, make no sense as a means of stopping Putin. But they are not meant to stop Putin or to do anything to help Ukraine. That’s not what this is about.

Anything however can be sold as means of stopping Russia even when it actually helps Russia.

That’s why the Biden administration is cutting deals with Russian allies like Iran and Venezuela.

Even as the Biden administration claims to be doing everything possible to sanction Russia, it outsourced the negotiations for a new and even worse nuclear deal with Iran to Russia.

Transportation Secretary Pete Buttigieg has suggested that the administration is considering buying oil from Iran.

Buying Iranian oil directly finances Islamic terrorism against America, but it, like many other previously unacceptable moves, can be sold as a patriotic response to the invasion of Ukraine.

Biden administration officials are also headed to Venezuela for talks with socialist strongman Maduro, the leader of a murderous drug cartel and an ally of Iran and Russia, to restart relations with his regime and bail it out by buying oil from a narcoterrorist state.

Does the Biden administration actually want oil from Iran and Venezuela? No, it does not.

The green energy agenda means that the Biden administration is thrilled with high oil prices and an international pretext for keeping them high. At the same time it can build relations with Islamist and leftist enemies under the guise of trying to fix the high oil prices even though it has no intention of doing so except during election years when it can claim credit for lowering prices.

What the Ukraine crisis really means is more green energy and more outreach to our enemies.

These are the same Obama administration policies being dusted off and treated like a new response to the crisis. Much as they were the default responses to any crisis that came along.

People often dismiss any military intervention as another case of ‘Wag the Dog’, but they forget that the movie actually featured a fictional war in which there were no real soldiers involved.

The Biden administration has managed to actually have war fever without a war. There are Ukrainian flags flying and vodka being poured down the drain without a single American soldier being on the battlefield. And, despite what some on both sides think, it’s going to stay that way.

In a real case of ‘Wag the Dog’, an unpopular old incumbent has managed to have a war in an election year without taking any of the political risks of military involvement. The Russians and the Ukranians do the actual fighting while the Biden administration sits back and exploits it.

Whatever happens, Biden is safe because no American soldiers will be killed in the fighting.

He also has a defense against the kitchen table concerns of most Americans. The rising prices which were previously devastating his polling numbers are suddenly no longer his fault.

Americans are being encouraged to “patriotically” accept rising prices as a consequence of the invasion. And some will fall for it and forget that prices were rising long before the invasion.

The unprecedented consolidation of corporate responses won’t salvage Ukraine, but it’s not meant to. Rather it’s another field test for the growing socialization of the American economy with corporations being coordinated to act in unison and cut off access when they’re told.

After running through the farce of looking for oil in Iran and Venezuela, and any other terror state that has any for sale, the Biden administration will double down on green energy. We will be told that the Ukraine crisis is more evidence that we need to invest all our money into windmills and solar panels. Even though the entire crisis only happened because the Europeans decided to invest in wind and solar which made them dependent on Russia and Ukraine.

In the name of stopping Russia, America will also become increasingly dependent on Russia.

Tethering America’s energy market to unstable players like Russia and Ukraine, or Iran and Venezuela, or Saudi Arabia and the Muslim world, forces us into bad binary choices like war or appeasement. Instead of breaking the cycle of dependency by embracing the potential of our own oil, gas, nuclear, and future energy capabilities, we’re trapped in the same dead end maze.

The green energy investors who fund the Democrats win and so do America’s enemies.

Biden isn’t trying to stop Russia’s invasion of Ukraine, he is trying to stop America’s economy while deftly avoiding the blame for the economic misery resulting from his domestic policies.

The sudden embrace of Ukrainian patriotism isn’t about helping that country, but consolidating unquestioning support behind the leftist agendas that are being carried out in Ukraine’s name.

When the crisis has been fully exploited, the blue and yellow flags will be tossed into the trash, along with the red, white and blue ones, and Biden will shake hands with Putin again.

Especially if both men have managed to get what they really wanted with each other’s help.