The Chechens have a birth rate of 2.5. Their religion and mosques are more likely to inherit the territories they are fighting over than either the Russian or Ukrainian Orthodox churches. 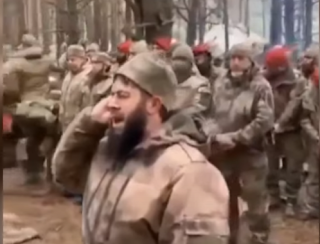 Medieval Europe was able to recover from devastating wars and plagues, and a life expectancy rate of around the age of a postmodern grad student, because of high birth rates. But just as the Europeans discovered how to fight truly catastrophic wars, birth rates declined. World War II broke Europe when the previous world war didn’t because the dead were never replaced.

The UK birth rate during WWI looked like the Chechen birth rate. By WWII, it dropped below replacement rate. Today, like so much of Europe, it’s artificially bolstered by the British version of the Chechens, Pakistanis and other Muslim immigrants. Germany went into WWI fueled by an aggressive birth rate of 3.5. By the end, despite desperate Nazi eugenics, it had dropped below replacement rate. It looked like the Ukranian one until the Muslim birth rate kicked in.

Russia went into WWI with a birth rate of around 7, by the time the Soviet Union collapsed it had also fallen beyond replacement rates. Like the Europeans, its birth rate is artificially inflated by a growing Muslim population, legal or illegal, even in major cities like Moscow.

Every Ukrainian and Russian death is another loss that will never be demographically replaced.

Western Europe and Russia have dueling visions for Ukraine and the territories of the former Soviet Union. Europe would like them to join a wonderful union based around peace, tolerance, and importing millions of Muslims to balance out all the peaceful tolerant Europeans. Putin would like to induct them into Greater Russia which will unite Islam and Christianity.

Europeans claim that they can have a tolerant society built around the demographic growth of a religion that murders unbelievers. Putin claims that a new Christian Russian empire will be built on a multifaith alliance with a religion that has spent centuries destroying Christian empires.

Putin contends that, “we have Eastern Christianity and certain theoreticians say that it is much closer to Islam than Catholicism is.”. The Communist era left more “certain theoreticians” than dead dogs in Russia. Historians might point out that Islam destroyed far more of Eastern Christianity than of the Catholic world. But, much like the Europeans, a childless Russia has to turn to Islam to get the proles and the cannon fodder to keep the lights and the wars going.

So there’s plenty of suicidal hypocrisy to go around from London and Berlin to Moscow..

Putin argues that, “Russia was built up as a multi-national and multi-confessional state.” The European Union contends the same thing about its own goulash of nations. The problem is that the “multis” will ultimately give way to just one uni. Or, more accurately, one ummah.

Germany welcomes in a million Muslim migrants and Putin’s puppet in Belarus imports Iraqi migrants by the thousands and orders them to invade Poland. It’s as if the Gates of Vienna were being recreated by manics competing to burn their own civilization down the fastest.

Three years ago, the Chief Mufti of the Council of Muftis of Russia told aconference held in the Russian parliament on the subject of the “History of Islam in Russia: Understanding With a Look into the Future,” that the Muslim ”population will increase to 30 percent in a decade and a half.”

Dimitry Smirnov, Chairman of the Patriarchal Commission on Family Affairs, Protection of Motherhood and Childhood for the Russian Orthodox Church, agreed with the Chief Mufti. “Muslims have more children. Not Tatars, but Caucasians. The Chechens have eight children and the Ingush. The Russians will run out by 2050. Other nations will live here: Chechens, Ingush, Arabs.”

Asked if there was any hope, the archpriest said, it was “already too late.”

Time to invade Ukraine then. And then the Europeans and the Russians can argue over which future Islamic bloc, Greater Muslim Russia or Greater Muslim Europe, should control Ukraine.

Whatever casualties the current war will bring, the Russians and Ukrainians are killing themselves much faster than each other with over 600,000 abortions per year in Russia and under 75,000 in Ukraine. Both countries also have some of the worst suicide rates in the world.

Behind the dueling campaigns of propaganda, the total saturation of lies, are these grim realities of despair and death. The spurious nationalism is a facade for the hard realities that Ukrainian and Russian boys are dying in a pointless war whose only winners will be the migrant hordes flooding out of the ‘Stans’ and out of Asian and Muslim Middle Eastern nations to replace them.

In the short term, European and Russian leaders and oligarchs expect to derive some temporary benefit from this latest episode in the death throes of our civilization.

In the long term, they are dooming us all.

Whatever the various sides claim to be fighting for, a Greater Russia, democracy, or nationalism, the only thing they’re really doing is accelerating their own defeat.

China and the Islamic Ummah need only watch and alternately cheer both sides on.

Much of Russia’s land, like America’s land, has already been leased out to China. While Putin chases Ukrainian territory, Russia proper is owned by China and colonized by Muslim migrants. Russia’s takeover of Crimea spurred Chinese investment in the area. Whatever Ukrainian territory Putin takes will ultimately benefit Chinese industries and their Russian middlemen.

But there’ll probably be a board seat in there somewhere for Hunter Biden or Neil Bush.

America, like Europe, Russia, and the rest of what once passed for the civilized world, have become profoundly unserious, crowded into social media echo chambers, shouting trending hashtags, and refusing to think in any terms longer than their attention deficit disorders.

There are always distractions to pass the time, to funnel away our outrage into the things that don’t matter to avoid thinking about the truly big things that do. Wars are wonderful distractions. Especially wars that don’t involve us and in which our only stake is a hashtag and a position.

But unless we start thinking seriously about the future, we won’t just lose, we will cease to exist.