On Feb 1, the New York Times ran an article warning that the national debt had topped $30 trillion for the first time, leaving us in so much debt that “the government would need to spend an amount larger than America’s entire annual economy in order to pay it off.” 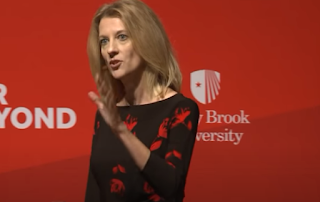 Five days later, the same paper ran a puff piece touting Modern Monetary Theory and its claim that you can just print as much money as you want to fund an infinite welfare state.

The “economic theory” embraced by Bernie Sanders, AOC, and Starbucks hipsters everywhere “posits that if a government controls its own currency and needs money…it can just print it.”

No wonder Rep. Alexandria Ocasio Cortez, whose economics degree from Boston U has appreciated worse than anything at Walmart, insisted that MMT needs to be “a larger part of our conversation.” It needs to be because MMT’s cult-like denial of reality is how we got here.

House and Senate Democrats, along with the Biden administration, which is packed with Sanders and Warren apparatchiks, have tested the theory that money can just be printed. Now once interest hikes on the national debt kick in, we’re headed for $1.4 trillion in interest.

The workers will probably want to be paid. And what do you pay them with when money is worthless? It’s a problem tackled by progressive regimes from Weimar Germany to Venezuela.

“Biden Can Go Bigger and Not ‘Pay for It’ the Old Way,” Kelton insisted in a New York Times op-ed last year. Biden went bigger and we’re all paying for it in the oldest way possible.

Kelton, who had worked as the chief economist for the Democrat Senate Budget Committee and then for Bernie Sanders, became part of the Biden-Sanders Unity Task Force. And Biden, who has spent a lifetime in politics and whose closest brush with economics came when Hunter was allegedly reserving 10% of kickbacks for him, doesn’t get it.

Neither, on every odd day, does the New York Times.

But to put it in terms that the Times can understand, the paper’s business people decided to raise its digital subscription price for the first time in 2020. The paper just bought Wordle for a “seven-figure sum” because 44% of its digital subscriptions are coming from its cooking, reviews, games, and other non-news areas. Despite the Times’ enthusiasm for socialism and even Communism, it remains listed on the stock exchange and when it needs more capital, it doesn’t just print more stock certificates, it raises prices and tries to provide value.

Kelton, who was the economic adviser to the Bernie Sanders campaign, joined Stony Brook University, a public university, with an apparent salary of $208,590. Up from $200,000 in 2017. In a striking case of income inequality, her salary is “163.8 percent higher than the average pay for co-workers and 216.3 percent higher than the national average for government employees.”

At Stony Brook, Stephanie outearns her husband, a fellow professor, who only makes $175,000.

And then there’s her MarketWatch podcast, speaking fees and book, The Deficit Myth, published by the Hachette Book Group which also published In Defense of Looting.

All of this enables the Keltons to enjoy a comfortable lifestyle with an estimated $2 million waterfront estate on nearly two acres. Aside from the usual looting of the taxpayers, this arrangement is made possible by a functioning economy in which money from public universities and publishers can be exchanged for the niceties of life.

But whether it’s health care, crime, homes, family values, or economics, lefties want to live a more traditional life in which they have their choice of doctors, their children from two-parent families attend private schools and crackheads aren’t pounding on their windows at 2 A.M.

And also they’d like to be able to get paid in actual money instead of colorful confetti.

Yet here’s the New York Times, with a market cap of $7 billion, featuring a woman who lives in a waterfront estate, insisting that, as Kelton put it, “Q: Are you saying the government can just ‘print the money’ to pay for new spending? A: Is there any other way?”

A currency based on something other than funding lefty policy agencies would be a start.

The United States is borrowing trillions to fund interest payments on a debt amassed to fund a war on poverty and assorted “investments in our future” as Obama liked to call his sprees. We mortgaged our future in an experiment with leftist social policies that have crashed and burned.

Now the leftist proponents of those policies insist that we shouldn’t be bound by mere numbers.

If the New York Times or the Keltons ran their own books the way they would like to see us run ours, the woke would shortly be very broke. And in prison. The Social Security Trust Fund, sold to a generation that survived the Depression and witnessed the early stages of the disintegration of the family as a hedge against growing old in poverty, became just another flow of tax revenues that can’t and won’t be paid back once the unfunded bill fully comes due.

The doomsday clock for the Trust Fund moved up one year. The news that Old-Age and Survivors Insurance will now run out in 12 years was largely ignored in 2021. It’ll go on being ignored until the mandatory 20% cuts start kicking in. And then it’ll get even worse.

Medicaid’s hospital insurance will be out much sooner by 2026. That’s only four years away.

Modern Monetary Theory shrugs at such things. A Truthout article on MMT and Medicare declares, “Congress can simply authorize the Treasury and the Federal Reserve to spend the money necessary for single-payer health care.” Money to lefties, who often come from privileged backgrounds, is a Nietzschean expression of progressive will, not a real thing.

In the real world, that means a Venezulean nightmare in which a prosperous oil-rich country became a place where hospitals had no medicine, stores had no food, and money had no value because the sociologist running its economy announced that inflation did not actually exist.

The vast distance between the elites and the real world makes such illusions possible.

America is vast and wonderful enough that its academic elites and economic podcasts can exist in an entirely different realm than the one occupied by people just scraping by. Socialism is the hobbyhorse of university grads who propose things that Karl Marx would have laughed at. Inflation may have killed the dollar store, but it’s still an illusion to the Biden White House.

In the face of the grim consequences of their social policies and economics, leftists are climbing higher into a fantastic world in which the prosaic limitations of human nature don’t apply. Like adults watching Marvel movies, it’s not really a world they believe in, but that they’d like to. It’s a world without any of the limitations on the political superhero fantasies of their egos. They expect us to live in that world, but don’t ask them to leave their mansions and join us there.