A confused political hack from Delaware staged a one-man insurrection by invading the sacred precincts of the Capitol building, hijacking all the TV networks, and yelling that the planet would be destroyed unless we gave him all our money so he could burn it and turn it into green energy. 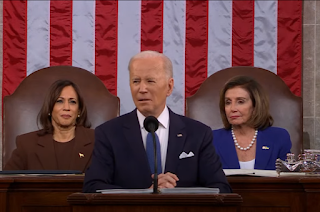 Joseph Robinette Biden Jr, who loves the sound of his voice more than his crackhead son or the bastard grandchild of a stripper, had already inflicted the second longest opening address in the history of this nation with a 2021 marathon address that killed more brain cells than meth.

Like the star of a slasher movie sequel, Biden Jr., returned to ramble through a worse sequel, but kept it down to a mere hour and two minutes of torture. The two minutes are significant because when you have to endure the Vogon poetry of word salads, non-sequiturs, mumbles, grumbles, malapropisms, and random interjections, 120 extra seconds is an eternity.

During those 3,720 seconds of lies, fearmongering, and malapropisms, Biden took credit for defeating COVID, Putin, and the English language. While viruses and nations can’t be defeated with hot air, English never stands a chance once Biden’s mouth gets its slimy tongue on it.

With the National Guard having safely secured Washington D.C. and locked down the U.S. Capitol, there was no room for anyone to escape no matter how badly they wanted to.

Unless they refused to take a COVID test.

Despite that, Congress appeared empty and the applause hollow. Some members had failed to show. Others kept their distance from each other as if malaise and failure were catching.

Biden, whose minions had met the threat of a Freedom Convoy of half a dozen trucks on their way to D.C. by summoning 800 National Guardsmen, began by asserting that, “freedom will always triumph over tyranny.” The best evidence of that was the complete collapse of mask mandates and the entire COVID public health security state that Biden had touted last year.

That and Biden’s poll numbers which are so far south they practically qualify as illegal aliens.

With the price of gas, homes, and groceries out of the reach of most Americans, Biden began by taking credit for doing nothing to stop Putin from invading Ukraine. And then vowed that he, along with a coalition of “freedom loving nations” would fight Putin until the last Ukrainian.

Or until their social media people run out of hashtags.

Biden, who confused the Iranians and the Ukranians, spent more time bragging about plans to seize the yachts of Russian oligarchs than Truman spent declaring victory after WWII.

Putin “may make gains on the battlefield,” Biden argued, but “he will pay a continuing high price over the long run”. Sure. Vlad may take Ukraine, but Biden will take his yacht. During his unhinged tirade, Biden revealed a plan to end women’s sports in America, but failed to name one thing that would actually stop Putin.

Except locking Vladimir in a room and forcing him to listen to a Biden speech.

After foreign policy, Biden turned to a subject he understood even less, economics. Trying to relate to the ordinary people whose lives and fortunes he had wrecked, he asserted that, “my dad had to leave his home in Scranton, Pennsylvania to find work or like many of you.”

Biden’s alcoholic father was a successful executive with his uncle’s company who ran through a series of failed independent ventures before becoming a used car salesman.

Having nailed down his working class cred, Biden began touting his various pork boondoggles, past, present, and future which helped push the national debt past $30 trillion. Deep in inflationary territory, Biden relaunched a pitch for his Build Back Better plan including spending billions to build 500,000 electric car chargers for the starving Tesla owners of California.

Congenitally unable to take responsibility for a single damn thing, Biden blamed inflation, high prices, and everything wrong with the economy on some sort of corporate conspiracy.

The doddering failure-in-chief wanted to talk about a lot of things, but like most politicians what he really wanted was our money.

More money for his green energy donors who want to wreck our energy grid and put the cost of heating and cooling our homes out of reach. And then more electric cars so that no one who earns less than six figures will be able to afford a car. Then subsidized child care which even his allies have warned will price the cost of child care out of the reach of middle class families.

With inflation out of control, Biden proposed pushing it even higher with a minimum wage hike and mandatory unionization and the end of freelancers through the PRO Act.

Then it was time for Biden to declare victory in the pandemic. Rapidly changing science proved that the virus no longer spreads around State of the Union addresses, enabling the CDC to urge Americans to just follow the science, take off their masks, and vote for Joe Biden.

“We can end the shutdown of schools and businesses. We have the tools we need,” Biden declared. The tools in question are polls that show even Democrats would rather french kiss a rattlesnake than wear masks at public events or do another year of virtual unlearning.

Biden then wrapped up the extended torture session that would have broken any of the Al Qaeda terrorists he recently freed from Gitmo by calling for open borders, illegal alien amnesty, abortion, and conducting gender experiments on young children. Then he closed by invoking God. At least unlike at the presidential debates, he didn’t invoke Allah.

At this point, not even Allah wants to be associated with the Biden administration.

Squinting in defiant confusion, Biden angrily concluded by shouting, “Go get him.”

The dozens of people watching were left to wonder whether he was talking to the voices in his head, an imaginary leprechaun, or his handlers in Beijing.

In a USA Today poll, the top response from registered voters asking what they want Biden to do in the next year was, “resign, retire, or quit”. Only 5% wanted him to tackle infrastructure, 3% wanted him to address health care, and only 3% were interested in global warming.

The country doesn’t want any of the clunkers that the son of a used car salesman wants to foist on them. It doesn’t want trillions more in debt so that Biden’s donors can get even richer. It doesn’t want to hear his inane ramblings or listen to his lies. All it wants is for him to go away.